Definition of a Deep Stall

I've been doing some research for a uni assignment and I noticed that the RQ-11B uses a "deep stall landing" to get back onto the ground. What I don't understand though is how this aircraft gets into a deep stall, so far every definition of a deep stall that I've seen says that for an aircraft to be in a deep stall, the horizontal stabilisers are in the wake of turbulent air from the stalled main wings. The aircraft in question has high mounted wings and a conventional tailplane, so even in straight and level flight the horizontal stabilisers are below the dirty air from the wings and so when the angle of attack is increased, the tailplane only gets further away from this airflow.

So the main question is, is there another definition of a deep stall that doesn't need the horizontal stabilisers to be in the dirty air from the stalled wing. 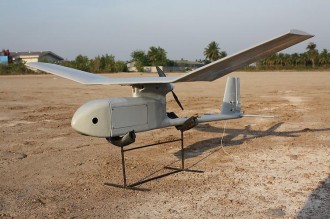 This is the aircraft or rather SUAV in question

I believe you are correct and the terminology they used was incorrect. What possibly is being described is sometimes called "mushing". Some aircraft are capable of having the airspeed bleed off until the elevator is all the way up - it then mushes with a high descent rate to the ground.

I owned a Navion that would do this. If you slowly bleed the airspeed off and add full elevator it will end up with a 500-600fpm wallowing descent and severe buffeting (full aileron may be needed as the wings rock side to side).

Several Piper aircraft are also similar such as the PA-28-140 Cherokee. The Cherokee is known to run out of stabulator during flares and can pancake onto the runway - no damage but an embarrassing hard thump.

I have flown just about all the single engine and small twin engine Cessna's and none of them will do this. They have lots of elevator and are always capable of a nose dropping full stall.

Captain "Sully" Chesley Sullenberger reported he was aware the flight computer of the Airbus A320-214 did this (US Airways Flight 1549, "Miracle on the Hudson") and deliberately held the yoke all the way back and let the aircraft mush onto the Hudson River.

Not the answer you're looking for? Browse other questions tagged aircraft-design aerodynamics stall or ask your own question.

42
What is a 'deep stall' and how can pilots recover from it?

5
How can an airliner have low altitude stall recovery?
4
Why does Airbus suppress stall warnings in certain situations?
2
What is formula for induced drag in stalling regime?
10
Why do the C-141 and C-5 have T-tails?
1
How do aircraft stall warning systems handle (or not) asymmetric-stall situations?
4
Why aren’t there any lifting-canard airliners?
2
Would a canard work better for emergency pitch down?
8
Why does the MCAS use the horizontal stabiliser rather than the elevators?
4
Why do wings prefer laminar flow if cd is lower for turbulent flows?
2
Would the front rudder of the Wright brothers really have helped in recovering the glider from a stall?