What would have been the other stops of Amelia Earhart's ill fated last voyage?

Having just watched Amelia - A tale of two sisters, I wondered whether, had she landed successfully on Howland Island, what, or where, would the remaining subsequent stops for the rest of her equatorial journey, in 1937, been?

Were there any other stages that would have been as equally, or more, dangerous, and liable to failure, or was the stage at which she tragically failed the most dangerous of all of the journey's stops?

This image from the Wikipedia page, Amelia Earhart, implies that she would have flown on to Honolulu, but the text doesn't state that fact explicitly: 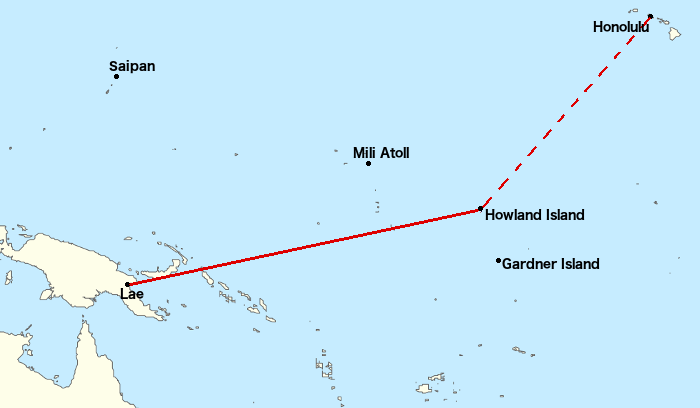 This table from Wikipedia shows the final two planned legs of her flight being:

6
Why does the Boeing 747 have a nickname but other aircraft do not?
9
What impact did the Concorde have on business of other sub-sonic airliners?
8
What daily commercial flight is the oldest / has been running the longest?
10
What is the largest aircraft that has been flown inverted successfully?
41
What is the largest plane ever to have been stolen by a single pilot?
2
Have there ever been any JATO bottles using only kerosene?
9
What clues would have indicated KAL 902 was off course?
42
Other than a swing wing, what types of variable geometry have flown?
11
What engine of the period 1855-1865 would have lifted one of Wright brothers' aeroplanes off the ground?
6
What sort of briefing and planning information would an airline pilot in the 1960-70s have used?