Can the divergence Mach be greater than 1?

I know that by decreasing t/c and increasing the sweep angle it is possible to increase the divergence Mach, but what is the limit?

I am calculating the Mach for a wing with a quarter chord sweep angle $\Lambda_{1/4}=54 ^\circ$. According to Denish Howe (Aircraft Conceptual Design) the “two-dimensional” divergence Mach can be found with Korn equation and then converted in a "three-dimensional" Mach considering the sweep with the following equation:

However, if the assumption that only Mach perpendicular flow affects the shock is maintained, this might be possible with very high sweep angles. What is the limit of this assumption?

I have so far seen multiple definitions for what "divergence Mach number" actually means (and worked with several of them), but it's usually tied to some empirical criterion with regards to drag increase with Mach number ($\frac{dc_D}{dM}$).

This means: For a given definition of divergence Mach number, and using suitably designed profiles, it may very well be possible to achieve divergence Mach numbers greater than 1 -- this means essentially that the shocks which form while accelerating towards and beyond the speed of sound are considered mild enough to not cause significantly more drag than would be expected if they did not occur -- again, for a given value of "significant".

The critical Mach number of a wing profile can, as you know, be increased by wing sweep. For an infinite, untapered wing at least, only the inflow component normal to the wing sweep line determines the profile pressure distribution. At 54° sweep, the effective Mach number is therefore just 58.8% (=cos(54°)) of the flight Mach number -- it'd be pretty easy to not even have shocks at M=1.0! However, real wings are never infinite (and rarely untapered), so there will be at least one shock at the tip/midsection/fuselage junction. That section at least will "see" the real Mach number, and "communicate" it at least some way to its neighbouring sections. That's one reason why Howe's equation has the exponent on the cosine.

Reality is a bit more complicated than the Howe's preliminary design equation, of course, because using the c/4 line assumes that that's roughly where the shock ends up forming. If you have e.g. a delta wing with an unswept trailing edge, the further downstream the shock ends up, the less swept it will be, and the stronger. So it is based not just on flow physics but also on some assumptions about the ability and methods of the people designing the wing profile (in turn probably based on previously-built and tested wings) 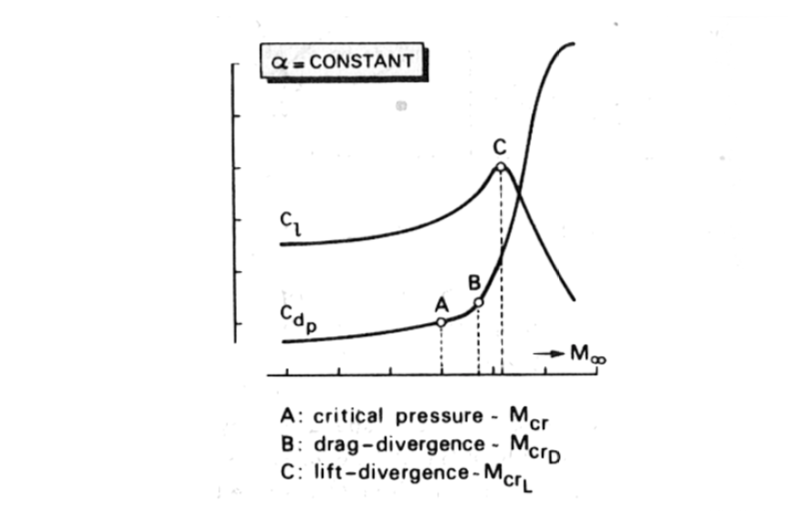 Torenbeek section 7.5b deals with the design of swept back wings for supercritical speeds:

In the case of positive $\alpha$, regions of supersonic flow will appear on the upper surface when $M_{cr}$ is exceeded. As soon as this region terminates in a shock wave of appreciable strength, which thickens the boundary layer, the drag increases noticeably. The drag-divergence (or drag-critical) Mach nurnber is defined as $M_∞$ for which: $\Delta C_{d_p} = 0.002$

This would be the 2-dimensional drag divergence number. Then in section 7.5e the 3-dimensional effects are discussed:

More advanced sections may also be tackled by introducing a Mach number $M^*$, which represents the extent of supersonic flow at the condition of drag divergence.

The factor $M^*$ in (7-36) has no physical meaning and is merely a figure defining the aerodynamic sophistication employed to obtain supercritical flow at the design condition. Good results are obtained by taking:

So yes, 3-dimensional drag divergence numbers . M=1 are found, but have no physical meaning. Not surprising when we realise that at M=1 there will definitely be shockwaves everywhere at the leading edges of the aircraft.

Not the answer you're looking for? Browse other questions tagged aircraft-design aerodynamics wing-sweep or ask your own question.

8
Is flutter speed always smaller than divergence speed for aircraft?
14
Why is the coefficient of drag for straight wings at supersonic speeds lower than for swept wings?
0
As a general rule, must the cg of a tandem ultralight be greater than 25% mean aerodynamic chord?
2
What is the relationship between aspect ratio and divergence speed?
0
Can wing sweep decrease total drag force at low-subsonic speeds?
1
If sweep delays compressibility, why does 747 cruise slower than A380?
5
Is the total upwards vertical force (lift included) greater than the weight in a steady climb?
5
Why should Mach wave angle be less than wing sweep angle?