What is wing trammelling?

What is wing trammelling and how does it affect wing stability and performance? 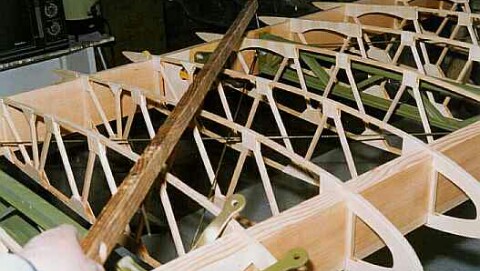 It's just making sure the rectangle formed by the spars, compression tubes and cross bracing is square. It's done using a trammel bar, which is just a stick (which the guy in the picture is holding) with a metal point at each end that is used to make sure diagonal reference points along the spar beams are the same distance apart when set across one leg of the X formed by the cross bracing, then the other leg. The effect on stability and performance is indirect insofar as you don't want a rectangular wing to be trapezoidal (swept - unless the sweep is part of the design like the upper wings of some biplanes, in which case you trammel to that requirement), as well as the fact that parts won't fit if things aren't square.

Not the answer you're looking for? Browse other questions tagged wing airfoil or ask your own question.

19
How does chord length affect wing design?
9
If no low-speed compromises were made, what would an ideal Mach-3 wing look like?
2
How does the thickness of a wing affect its aspect ratio?
2
What are the effects of camber location in an airfoil?
0
Winglet design and airfoil selection
1
Would the Wright Flyer have flown better with thicker airfoils?
2
How does the “pendulum effect” affect biplanes?
1
How do wing tip vortices that interact with the wing surface affect drag?