Have there been any incidents caused by an inability to shut down an engine?

I read many items on the avherald.com site where it says "engine shut down during flight" or words to similar effect.

I'm wondering if there are any instances where an engine could not be shut down or the pilots had trouble shutting down the engine when commanded. What sort of backup systems are in place to avoid this kind of scenario?

Enroute to Sydney, Engine Number 2 of the A380 disintegrated explosively. The shrapnel of the explosion destroyed many systems, including a hydraulic system, the anti-lock braking system, flaps and electronic controls.

After emergency landing, the pilots were unable to stop engine number 1, because the controls had been destroyed by shrapnel. Emergency services had to douse the engine until flameout was achieved. 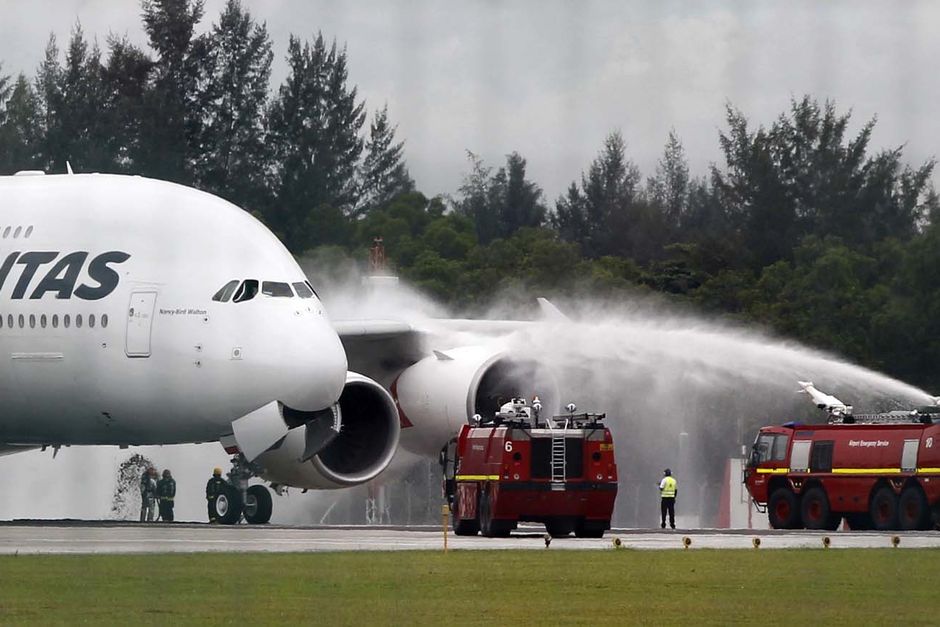 Fuel contaminated by super absorbent polymer jammed fuel valves caused engine control problems. The aircraft eventually landed with one engine at about 70% N1 at significantly higher than normal airspeed, burst some tires from the increased braking necessary and was evacuated.

This famous crash happened on the acceptance engine run-up test. The causes were unrelated to engine problems, but after the crash, due to damages, two engines couldn't be shut down. One of them ran for 9 hours (!) after the incident, until it ran out of fuel, creating obvious hazard for the emergency crew. (Luckily, there were no passengers to evacuate).

There is this business jet with two engines that didn't quit for 20min after it overran the runway and splashed around in a Bay. Investigators found it attempted the landing with a 10kt tailwind on too short of field and the touchdown too far beyond the threshold.

Air France 72.12 Sept 1993. Aircraft (747-400) went off the runway in Papeete. Due to electrical damage (aircraft nose was in the water) the engine could not be shut down from the cockpit and AFRS had to 'drown' the engine by hosing a lot of water into the inlet.

My understanding is that the failure mode of engines is to be fail-safe, ie to minimise the impact of failure. With FADEC (full authority digital engine control) the problem is what would be the best action if signal were to be lost from the control box to the engine? It was explained to me that the lesser of two evils will be to have the engine running rather than shutting down so the protocols were designed accordingly.

While this does not answer your question on backup..It is more sense if you look at it from a different angle.."what is the backup in case control of engines is lost". In this case the backup would be the engine would continue to run rather than shut down.. If this happenned in the air you would be better off with a working (albeit uncontrollable) engine rather than a dead one.

What sort of backup systems are in place to avoid this kind of scenario?

As I understand it airliners normally have a "fire handle" for each engine which is independent from the normal engine controls. This handle can be used to cut off fuel to the engine and optionally discharge the fire extinguishers.

I can't seem to find an official source but from what I can gather the fire handle did not work in the Quantas case, likely due to the severe damage from the uncontained failure of the other engine on the wing.

In addition to the posts above, it is worth pointing out that this exact scenario is part of the flight testing of any new aircraft. If you can find it, there is a whole episode of the PBS show on the B777 that shows this test being carried out.

It was an especially odd one, because the aircraft had P&W engines and brakes designed to handle that, but they wanted to test the performance as if it was equipped with the more powerful RR engines. The chief pilot originally said no, but as the engineers at the various companies said ok, he relented.

The test required the aircraft to go to maximum power, in this case higher than the official rating so they could test the RR case. After it reached a certain speed, they put on full brakes, with the engines still at max power. When it finally came to a stop, the brakes were bright yellow. It then had to sit for a time (5 minutes IIRC) to simulate the emergency vehicles arriving, which then sprayed the brakes with water. It was quite impressive.

As they were careful to say, the idea of the test is not to pass some requirement, but to simply give future pilots an understanding of what to expect in the case it happened.

Not the answer you're looking for? Browse other questions tagged safety jet-engine engine-failure or ask your own question.

13
Have there ever been any accidents within holding stacks?
11
Are there any incidents caused by rudder failure in Military jets?
8
Is there any mechanism in engine mount to prevent shock loads on engine while landing?
8
Why weren't the Airbus A330 engines designed with a system to stop their fans?
5
How do the engines of a multi-engine airplane shut down after fuel starvation?
4
Do a turboprop’s compressor and turbine rotors windmill when the engine is shut down and feathered?
5
How many serious airline accidents have been caused by design faults alone?
2
What is the difference between an engine "shut down", "cut-off" and "cut down"?
9
Any ideas on what caused my engine failure?
13
Were propeller airplanes significantly more "scary" to fly in compared to modern jet ones?