What plane is this?

This aircraft was parked at the very back of the McCarran airport, and I was absolutely fascinated by it. It has a propeller on the back of the fuselage as well, though not very well shown in the picture.

What is its name or model? 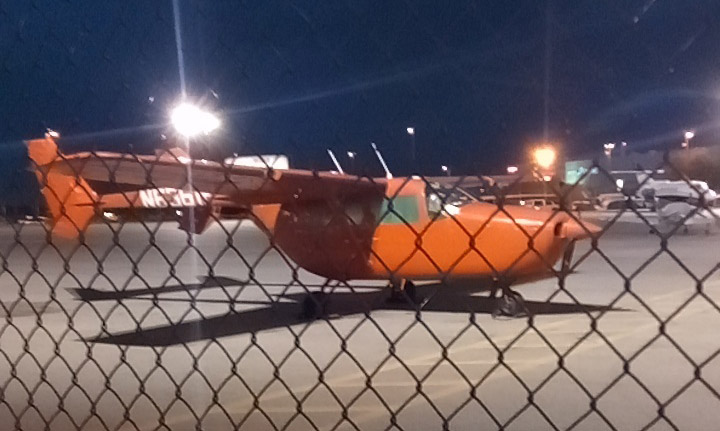 Googling the plane's registration number (this one is N6361F) is almost always enough to identify the plane.

In this case, FlightAware is high on the list of hits and says that the plane is a Cessna 337A, built in 1966. Searching for "Cessna 337A" then leads to Wikipedia for more information.

That's a Cessna 337 Skymaster. They were built from the early 1960s to the early 1980s. Because the two engines are both on the fuselage centerline, the Skymaster is more controllable than a conventional twin engine aircraft in the event that an engine fails.

Cessna 337 Skymaster and/or the O-2. The 337 uses a push/pull design which is rarely encountered, but gives you the advantage of centerline thrust in the event of an engine failure (but the disadvantage of a noisier cockpit). You can see the military variant in the 1988 film Bat 21 with Gene Hackman and Danny Glover, some great aerial footage regarding the power and maneuverability of the aircraft. Because of the push/pull prop design, some nicknamed it the "Mixmaster", but if you watch the movie Bat 21, you will see what a great aircraft it is despite the blender reference.

Not the answer you're looking for? Browse other questions tagged general-aviation aircraft-identification or ask your own question.

2
How would gyroscopic effects affect push-pull configuration vs conventional twin engine in the event of engine failure?

8
Is there any way to tell the difference between MD-80 models?
14
Aircraft Identification: What single-engine, T-tail, commuter aircraft has a single prop but sounds like a jet?
65
What is this odd aircraft?
8
What is this airplane used for?
11
What is the plane on the Home Bush Bay Funsaver EP cover?
14
What is this plane with its thick cockpit?
4
What is this plane seen in the Falcon Crest TV series?