Why are the positive points in a V-n diagram associated with pitch maneuvers? 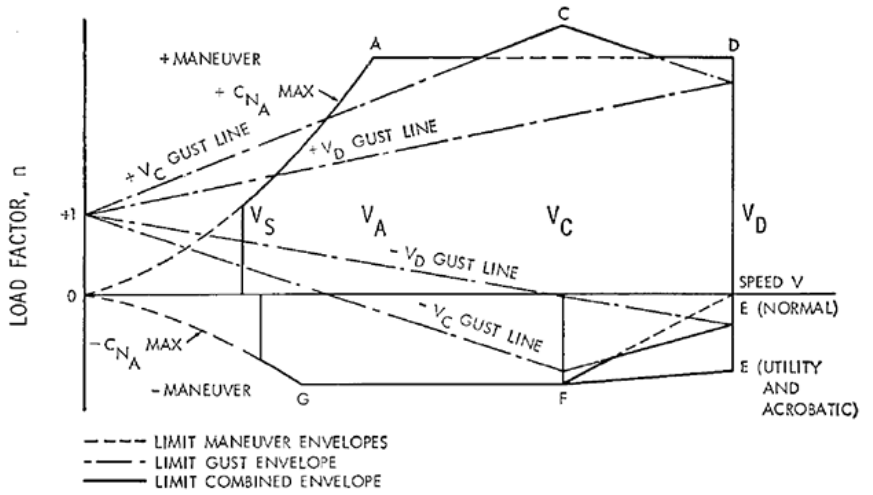 For an aircraft with such flight envelope, the flight conditions in point A, C and D are associated with symmetrical pitch maneuvers. So, for the combination of loads factor n and speed V in each of those points represents a symmetrical pitch maneuver, in which there is a certain angle of attack and certain deflexion of the elevator, both different from zero - all other control surfaces wouldn't be deflected. That comes from reports from SAE aero design competition and from Structural Loads Analysis: Theory and Practice, Lomax

I understand the airplane can execute any maneuver so long it is inside the flight envelope, but why are the critical pitch maneuvers those "described" by points A, C and D whereas critical rolling or yawing maneuvers have clearer definitions* regarding the most extreme conditions related to those maneuvers?

Two types of yawing maneuvers, as shown schematically in Fig. 4.1, must be considered for structural design...

Because they are reached when the aircraft flies a pitch maneuver. Let's look at the three points in detail:

9
Which aircraft endure the highest Max Q's (aerodynamic pressure)?
3
Who decides how to "handle" an aircraft, with regards to severity of manoeuvres etc?
11
Are engines fed differently in reduced gravity aircraft?
6
Are sudden turns and descents a standard emergency procedure?
1
Propeller Characteristics at Different Altitudes
57
Did we get closer to another plane than we were supposed to, or was the pilot just protecting our delicate sensibilities?
8
Why does the MCAS use the horizontal stabiliser rather than the elevators?
1
Why don't nonrigid airships have multiple gas cells?
4
Why doesn’t the A320 family suffer from the same design constraints regarding engine placement/landing gear length as the Boeing 737 family?