Could a Dyson fan scale up to be used as a bladeless aircraft engine?

Dyson has been making bladeless fans for a few years now that accelerate a consistent stream of air without exposed blades. 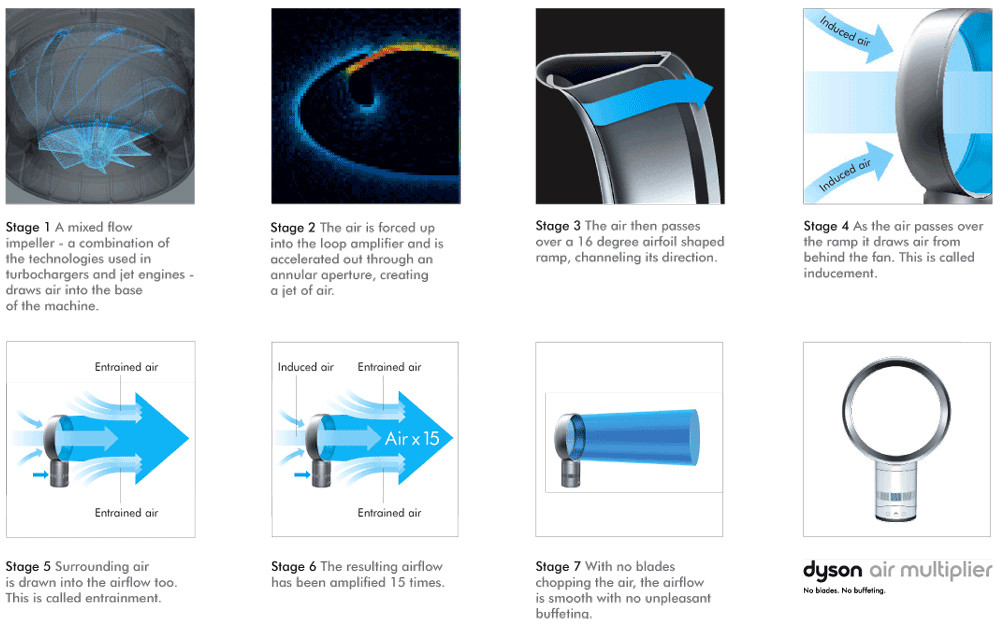 If this concept were applied to aircraft engines, it could potentially reduce the number of bird strikes, engine complexity/part count, danger for ground crews, etc. That said, it has not been done (or has it?). What are the major roadblocks prohibiting engineers from scaling this technology to large aircraft applications?

No. Not a useful propulsion engine.

The first problem is power. The air stream from Dyson's fans is weaker than what you can get from a conventional fan the same size, and jet engines need a very powerful stream. You'll notice they're quite heavy as well; Dyson AM-06 has a thrust-to-weight ratio of just 0.06, 100 times less than a jet engine.

The second reason is they're very inefficient at high speeds. Dyson's fans use the Venturi effect, which is also used in aircraft evacuation slides, to turn a narrow stream of fast air into a wide stream of slow air. This happens through friction simply pulling slow air alongside the fast stream.

Current airliner engines do the same thing, but better. There, high-energy air spins a turbine, which then spins a fan. The conversion efficiency of this process is 3x-5x better and produces uniform velocity - important when you're close to the speed of sound. The fan approach also results in a smaller, lighter engine.

Jet engines imitating Dyson's fans would need cores and core intakes as least the same size as current ones. The reason Dyson chooses to protect their intake with a grate and Rolls-Royce or GE don't is Dyson fans produce on the order of 50 W of power, jet engines 50+ MW. No one cares about a few watts, they do about a few megawatts, which translate into a couple ocean tankers full of oil over a plane's lifetime.

If you want, you can protect a jet's intake with a grate too - see F-15SE, Su-57 (PAK-FA) with radar blockers, Mig-29's "dirt runway" top intakes. This has nothing to do with using an ejector or not. Dyson's design does remove the slow fan, but at the cost of a lot of weight and efficiency, and it's core damage that is the worst scenario in bird strikes.

The third reason is that Dyson's fans would not scale. To fly at Mach 0.8, the ejector stream would have to be highly supersonic, which is a problem in itself. To use them for hovering, where they are reasonably efficient, you'd face the problem of Venturi effect fading with distance - requiring an entire grate of ejectors, not one simple ring. Helicopter blades do the same thing better, while being far lighter and easier to fold.

Actually, the principle exploited by the Dyson fan is used in some gas turbines, just not quite the way your question expected.

Here is a picture of the J58 engine. When the tertiary doors are open, air is entrained through them, adding mass flow to the engine. In theory, the extra mass flow gives extra thrust. But, the extra air flow was entrained by the core airflow, so in reality the conservation of energy probably means no extra thrust occurs, because you have a higher mass flow, but some of the velocity from the core flow has been transferred to the tertiary flow, so the average velocity will be lower.

(@John K almost got there when he mentioned “annular ejector thruster”.)

The underlying concept in the Dyson fan may be considered similar to that called: 'Trompe' (See Wikipedia), where a jet of water drags a flow of air. You can have a look in ESPACENET at Patents FR935340: 'Flow enhancer for jets and compressors'; US2946540: 'Jet propelled aircraft'; CA611861, for a 'Flying Disc', all by Henri Coanda, and US2918233: 'Aerodyne', by Alexander Lippisch, all in the same line, thus, I'd consider as best option to accept or reject Dyson fan as an alternative to propellers, ducted fan, or turbofans, conducting some experiments, with the design adapted to propulsion, not cooling or moving air, the Dyson fan data provided in a link in answer by JollyJoker is promising. Not?

The concept in Dyson fan was in some aircraft designs, the Avro Canada Flying Disc never went airborne and was uncontrolable, but the P Moeller disc m200x -

- flew with multiple fans, and was transposed into a toy named: 'Magic UFO', a variant drone.
See patents: US3065935, J Dubbury; GB383408, C E Johnson; US3022963, JCM Frost, showing the concept in Dyson fan was considered in Aircraft, calculations and experiments have the last word, but if an arrangement moves more air, meaning more mass, at similar speed, meaning more thrust, and this done with less power, men, you have an idea worth testing at airplane scale. Salut +
Share
Improve this answer
edited Jan 14, 2019 at 13:40
answered Jan 9, 2019 at 22:47

1
Why aren't thin, delta-shaped wings used for fighter aircraft?
6
Could bypass air be used to cool a rocket engine like in turbofans?
12
Can a pulse jet be used on a light GA aircraft?
5
What could lead to engine running hot on climb out?
24
Could the principle of owls' silent flight be used for stealth aircraft?