What is the true top speed of the SR-71?

By "true" top speed I mean the absolute fastest horizontal airspeed the aircraft can achieve if damage to the engines is disregarded (similar to how the MiG-25 apparently can reach mach 3.2 but may damage its engines beyond repair). Catastrophic structural failure (of anything beyond the engines) is not permissible in this scenario.

In "The Untouchables" Brian Shul claims that he reached mach 3.5 while evading a missile. This is also stated in the Wikipedia article on the SR-71 with a citation to the same book.

Are there any other sources than his own book that can confirm or reject this claim? Can it be argued for or against this top speed claim on technical merit or physical limitations?

On Wikipedia it is also stated "Maximum flight speed was limited by the temperature of the air entering the engine compressor, which was not certified for temperatures above 800 °F (430 °C).[57]"

However, it is not clear how much abuse beyond this the compressor could take. It is possible to give some estimate or educated guess based on the materials used? 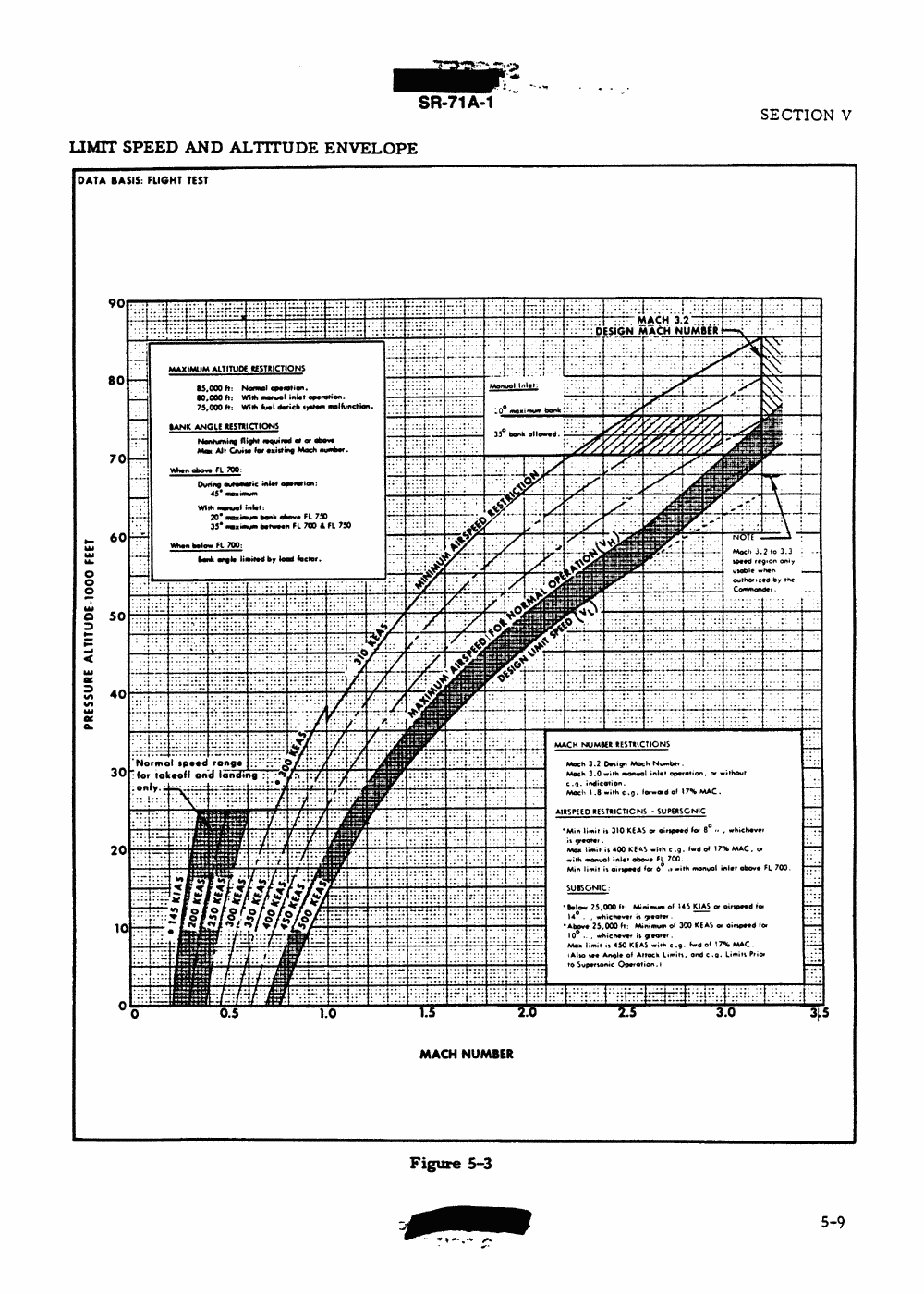 The SR-71 Pilot's Operating Handbook has been declassified and is available online. The operating limitations section states that Mach 3.17 is the recommended maximum cruise speed for normal operations. Speeds of up to Mach 3.3 could be authorised by the commander as long as the maximum CIT (compressor inlet temperature) of 427 degrees C was not exceeded. So while it might be possible to exceed the maximum Mach, doing so probably carried with it the risk of Bad Things(TM) happening.

The USAF never did release just how fast an SR-71 CAN fly, preferring to state that it DID fly at certain speeds on certain dates and set certain records.

Maj. Brian Shul made references in his books to the jet attaining Mach 3.5+ during flights he flew over Libya evading SAMs. I believe him. There are also credible rumors that a Blackbird was capable of Mach 4 in ideal atmospheric conditions. If USAF or CIA Sled Drivers did attain that high of a speed on certain occasions, they’re not confirming it.

Most Blackbird pilots were pretty coy about a top speed. Shul liked to say that the muzzle velocity of a high powered rifle bullet was about 3000 ft/s. A Sled comfortably cruised at 3,300 ft/s and the Pilot still had a couple of inches of throttle left in case he REALLY needed to haul ass!

Not the answer you're looking for? Browse other questions tagged airspeed sr-71 or ask your own question.

5
How much aerodynamic heating do jetliners endure?

8
What is the difference between planned true airspeed and actual true airspeed?
8
Why is the XB-70's Top speed only about 60mph higher than its cruise speed?
20
What is the reference used when measuring flight speed?
9
How to calculate the real Ground Speed from True Air Speed?
1
Temperature sensor are needed to compute True Airspeed for low speed aircrafts?
10
What is the effect of altitude on true airspeed?
16
What is the commercial passenger aircraft top speed record?
14
Why would 2 aircraft fitted with the P&W PT6 Engine have different top speed?
23
Why did the SR-71 Blackbird have a light on its top?
4
Ground Speed vs True Airspeed from Departure Point to Destination - time interval