Are there any hybrid electric planes?

Are there any hybrid planes (planned), or would this be impossible because we don't have big enough batteries?

There are experimental electric planes. Some are promising enough that they might end up useful as trainers and private GA flown for the love of flying.

Hybrid aircraft are, even on paper, only moderately interesting. Aircraft throttle in cruise at 45-75% for GA, 70-90% for small jets, and 80%-95% for long-haul widebodies. This is due to the engines "self-throttling" in a way - power and fuel consumption reduce due to lower air density as you climb.

So major airliners have nothing to gain from going hybrid, they can only shrink their engines by 5-10% with a hybrid system. This is very different from cars, which run duty cycles as low as 10%.

And there are no start-stops or regenerative braking to recover energy in flight. More precisely, aircraft already use regenerative braking - by pitching up or deploying flaps, speed gets traded for lift. So that braking energy is already being harvested, and stored as altitude (potential energy).

Smaller propeller aircraft could replace up to 30% of their power, so it's less cut and dry. However, when you want full throttle, you often want it for a while, like in climb. The only way for a non-plug-in hybrid to save energy is to use a lighter/smaller engine, and it's difficult to shrink enough to offset the hybrid system's weight.

A plug-in hybrid could benefit from the lower cost of electricity vs avgas, but fuel averages to less than a third of private flying expenses. Pure electrics have a shot at making flying more accessible through simplicity. With no fuel, very simple and reliable engines, it makes sense to relax the rules, like is done for ultralights. Hybrids have all the complexity of a piston-engined plane and then some.

The hybrid route makes sense for cars. The only safety-critical parts of a car are steering and brakes. Engine power is almost arbitrary, most hardware is just nice to have, and there's the universal failsafe of pulling over. In a plane, things need to work. Two systems that both have to work to fly safely is a complication and will likely increase costs.

Alternately, either system needs to supply takeoff thrust on its own. That could work in the 19-seater class, if the authorities accept a hybrid "twin"-engine single prop as sufficient redundancy. But there's a lot of "ifs" in this.

In a zero-weight scenario, some military aircraft (fighters, naval) could benefit from a hybrid system, as they have excess power like cars do. That's where reality hits: for given output, electric motors are lighter than car engines, but much heavier than aircraft jet engines. Since they're not lighter, there's nothing to be gained.

There are a number of small (ultralight, Light Sport categories) aircraft that run on pure battery power for anywhere from a few minutes to (as I recall) nearly an hour of powered flight -- a couple of these are essentially motor gliders, so they can extend the total flight time to multiple hours with soaring flight.

Larger hybrid aircraft have been proposed, even in to the regional airliner class -- they'd use small, efficient jets or turboprops, just adequate for cruise, augmented by electric ducted fans or propellers for takeoff thrust, or alternately shaft turbine generators driving pure-electric propulsion fans, augmented with batteries for takeoff power; the result would be, as with a hybrid car, the ability to install a "too small' engine that burns much less fuel, and still get acceptable performance.

There is a company call Bye Aerospace here in Colorado that recently celebrated a successful first flight of their "Sun Flyer" prototype, an all-electric 2 seat trainer. I believe they are planning a 4 seat version as well. Check 'em out! 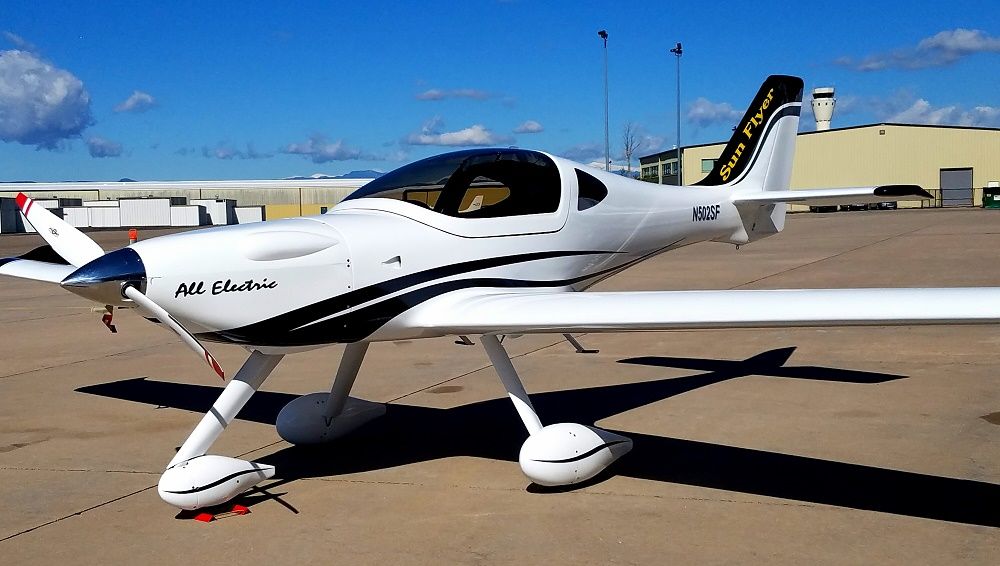 Actually, NASA just announced a new X-plane program. While they haven't selected a design yet, it looks like a hybrid-electric system is one of the designs they will try to build see here. The point of the hybrid system in this case isn't so much about providing additional thrust from an efficient system, but rather to use electricity to transfer power to where it is needed for drag reduction.

Not the answer you're looking for? Browse other questions tagged aircraft-design electric-engine or ask your own question.

41
Could an electric engine provide the same performance as jet engines on current aircraft?
12
What is the most 'environmentally friendly' way to learn to fly?
2
Why can’t electric motors be used in aviation
0
Turbo-electric engine vs high by-pass-ratio Turbo fan, which config. would seem more efficient? (Liquid Hydrogen Fuel)
1
How far would an all electric A380 fly?

2
What are some alternative benefits to electric propulsion?
2
Are there other examples of human-electric hybrid aircraft?
3
Are there any electric ultralight aircraft?
4
Could an electric airliner be aerotowed to cruise altitude by an electric "tug" aircraft?
1
Could a hybrid electric steam plane be more efficient at altitude than at sea-level, and how to optimise it to frigid air?
2
Are there any plans, designs, or prototypes for an electric ground effect vehicle?
0
Are there planes designed for going supersonic in a dive only, not in leveled flight?