Why is Iceland an efficient connection point between London and Boston/NYC?

Air connections thru Iceland (Keflavik) have been increasing explosively in recent years. Keflavik is used as a transfer point on trans-Atlantic itineraries.

The highest-traffic city pair involving Keflavik is Keflavik-London, so Keflavik is evidently being used as a way station between London and North America.

Also, NYC and Boston are the top North American routes for Keflavik.

However, Iceland is quite out of the way of the US northeast-London direct path. Why is it economical to stop over in Iceland, despite it being off-course?

One of the benefits of having a stop halfway is that the aircraft can refuel.

It therefor doesn't have to carry the fuel for the second half of the flight during the first half, which saves fuel.

And it also means that the aircraft is lighter, so it is more efficient to use a smaller aircraft. Typically you see mostly Boeing 777, 747, 767 and Airbus A380 and A330 across the Atlantic, but if you look at the traffic in Keflavik, you'll note that most aircraft are B757 and A321.

These aircraft perform well at mid-ranges, but on longer ranges they have to reduce their payload for fuel uptake for the long flight. For longer flights the bigger (and more expensive) aircraft are more efficient.

So the effect of the extra stop is that you reduce the fuel consumption, so that you can use smaller aircraft with lower fuel capacity which in turn means lower capital expenses. This makes the Iceland option economically attractive.

Iceland is a perfect transatlantic hub. Most importantly, it makes single connection flights efficient between nearly all European and North American cities. Fuel and equipment advantages have already been mentioned. Look at all the city pairs, not just LHR-NYC, and you'll see that it's better as a hub than London, New York or any other city located on the mainland continents. 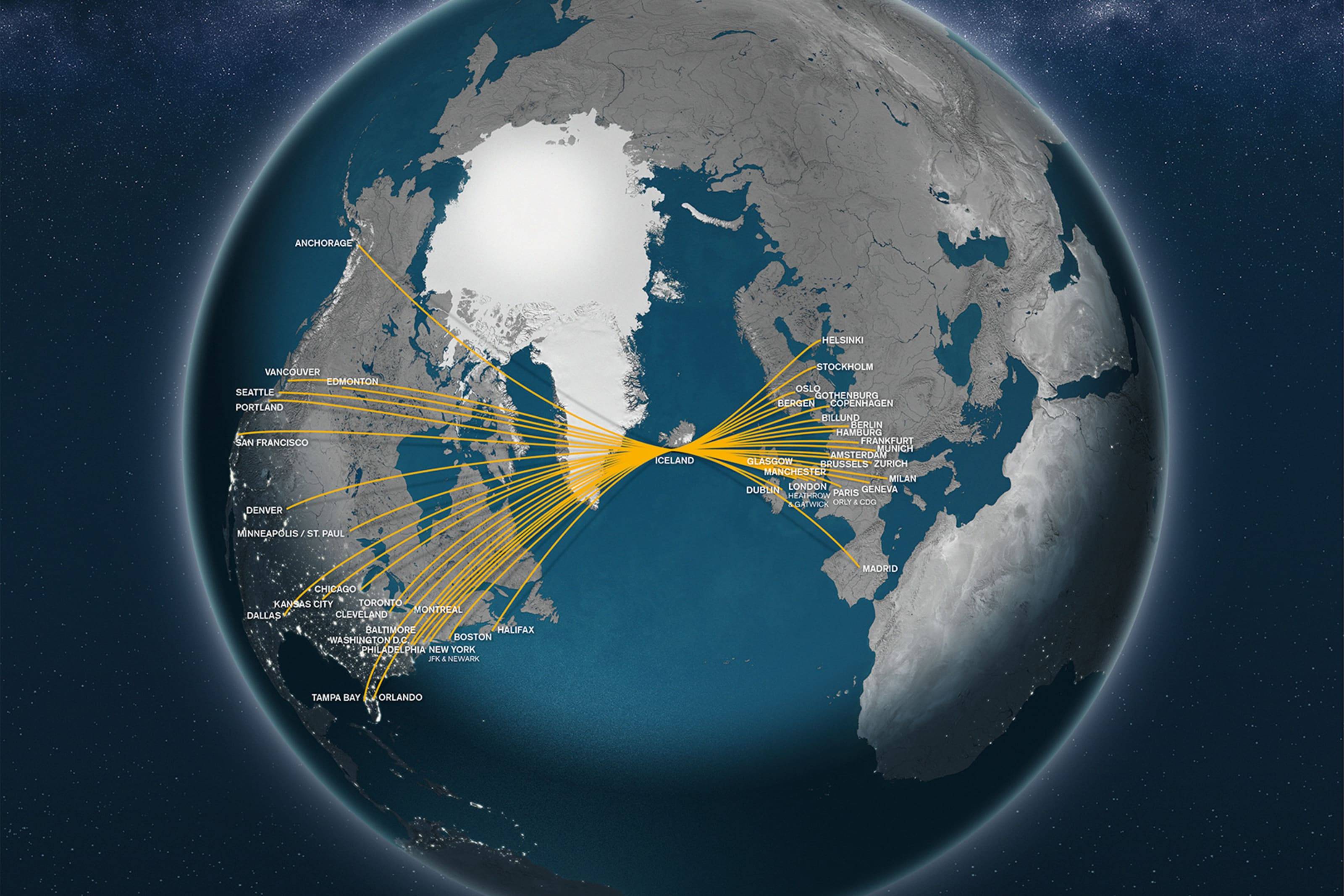 It is part of a larger effort to boost Icelandic Tourism and has more to do with the economic condition of Iceland (of which tourism makes up 42% of their economy) than aviation for the most part. Iceland is a nation that does not have a huge amount of exports and relies heavily on tourism. Budget Icelandic airlines have been operating with Keflavik layovers and cheap flights (almost un-beatable prices) to and from Keflavik in an attempt to boost through traffic and encourage stays in neighboring Reykjavik. Both Icelandic Air and Wow air even offers a no-additional-cost stop option if you want to stay in Iceland for a bit.

From a strictly aviation standpoint, Iceland does provide a diversion airport on the trans Atlantic route but all things considered long distance flight is not the dangerous or difficult task as it once was.

Not the answer you're looking for? Browse other questions tagged airline-operations refueling transatlantic routing or ask your own question.