Why would a flight from Frankfurt to Madrid fly over London?

While enjoying the sunshine at the bank of the river Main in Frankfurt (Germany) this evening, I saw a LATAM B787-9 depart over the city center towards the north. This was slightly surprising, as the only LATAM flight from Frankfurt is LAN705 to Madrid (Spain) (and then to Santigo, Chile) which is to the southwest. I have taken this flight quite a few times before and I don't remember it ever flew a northerly departure.

Even more surprising was that continued for a while to north, until I lost sight of it and had to take out the Flight Radar 24 App to track it. The flight continued towards the northwest, into the Netherlands and across the North Sea towards the UK.

By now I highly doubted the flight was going to Madrid. The only reason I could think of for this routing is that either LATAM changed their flight schedule and flies via another city to Chile or the aircraft was being ferried to Boeing in the US for maintenance (LATAM has many problems with the B789 Rolls Royce engines).

Coming back home, I just checked again where the flight was (fully expecting it to be mid-Atlantic) and I see this: 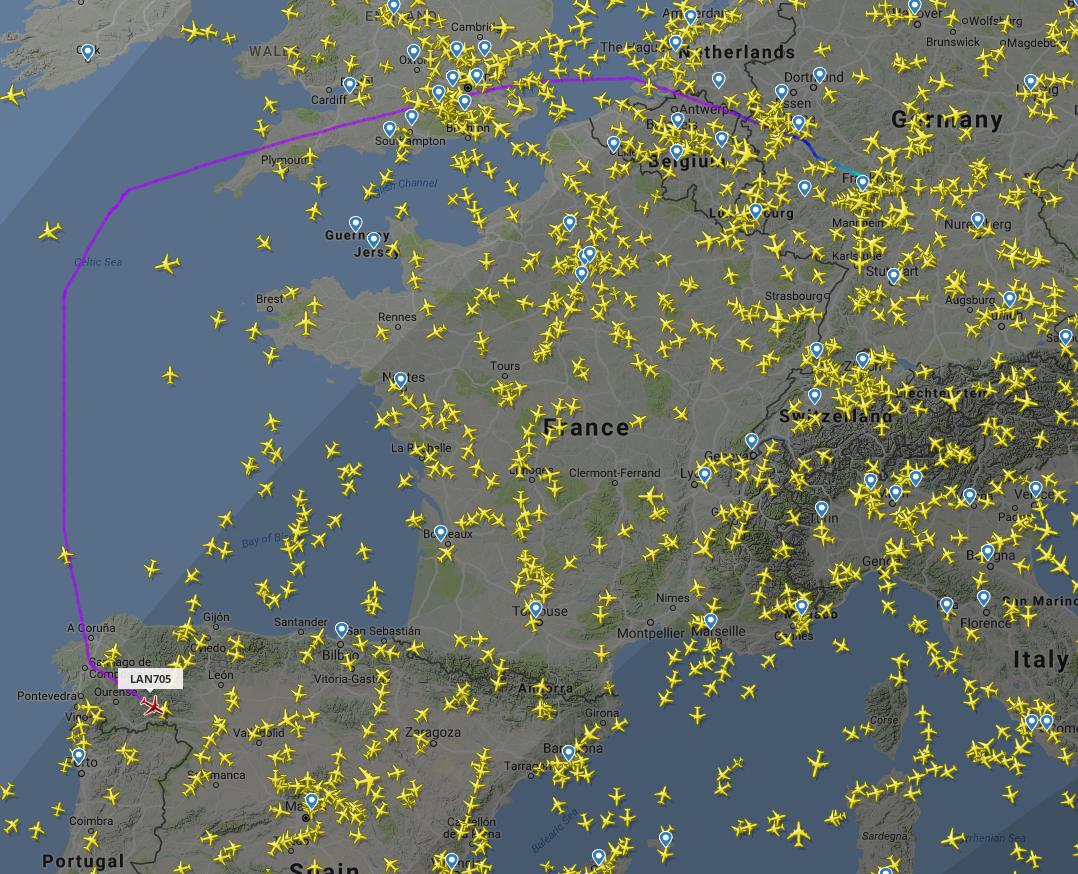 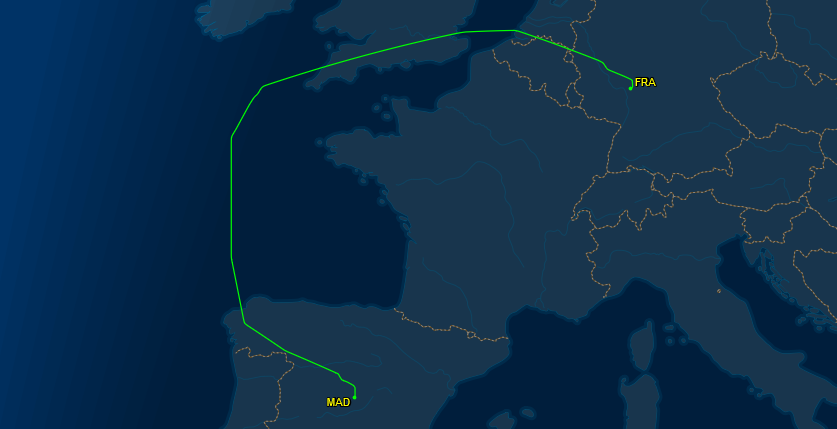 The flight departed Frankfurt, turn north, then northeast over Belgium and the Netherlands, into the UK. Then went over London, west-southwest over Lands-end, then over the Celtic sea it finally turns southbound toward Spain. It now entered Spain and seems to be heading to Madrid, but the flight will be over 2500 km, while a straight line between Frankfurt and Madrid airports is about 1420 km.

What is going on? What is the reason for flying over 2500 kilometers, while it could be only 1500?

I can't be completely sure but the most likely reason is a planned strike by ATC in south-east France. It was planned from the 30th of June to the 1st or 2nd (depending on the source) of July, meaning that ATC services would be unavailable or at least seriously reduced in that area, presumably with knock-on effects in other parts of the country. Some airlines had cancelled flights completely although in the end it looks like the strike was called off.

Strikes are notoriously common in France (there's even a website dedicated to tracking them all) and especially in the summer, so an airline might just plan to avoid French airspace altogether to avoid the uncertainty. Of course that costs more money, as you said, but a missed connection to Chile and stranded passengers in Madrid would also cost money.

Not having been there I can't tell for sure, but I would guess congestion.

For safety reasons, the number of flights handled by one controller, and thus flying through their sector, in an hour is limited (to 35 IIRC). If there are more flight plans filed though it than the capacity, the flow management, handled in Europe by the Network Manager Operations Centre, will start to issue delays. If the airline dispatcher does not like this—probably because the delay would cause problems with connections somewhere down the line—they can try to negotiate different route that avoids the congested area.

As mentioned in Why do airlines follow these routes between between Barcelona and Düsseldorf?, France has quite many restricted areas, which makes it more likely to get congested.

In addition to the other reasons, it might simply be a matter of avoiding ATC charges. ATC charges by the mile multiplied by a factor for the size of the plane. However out in the Bay of Biscay ATC is pretty much free.

See this article on the BBC for more details. Here is a table comparing the costs.

Not the answer you're looking for? Browse other questions tagged flight-planning routing latam or ask your own question.

106
Why do airlines follow these routes between Barcelona and Düsseldorf?

15
Do autopilots force the aircraft to fly over certain coordinates?
13
Is the “Bay Tour” flight path documented, or is it a more informal route? Are there similar flight paths for other cities?
110
Why did this plane fly in a zigzag pattern?
16
Why don't aircraft fly over Tibet?
31
Why did my IAH-SYD flight avoid Mexican airspace?
4
Why is Iceland an efficient connection point between London and Boston/NYC?
2
Why would a flight take a detour on clean weather?
4
Do stratospheric business and military jets use the North Atlantic Tracks?
17
Why don't aircraft fly direct via oceanic airspace from UK to Iceland?