Why flaps can deflect up to 25°+ without stalling the wings? [duplicate]

According to this graph,plain flaps have their highest Cl at about 2 and stalls at about 15°,my question is how then do airplane flaps reach 25°+ of delflection when this gragh clearly states that stall is at 15°? 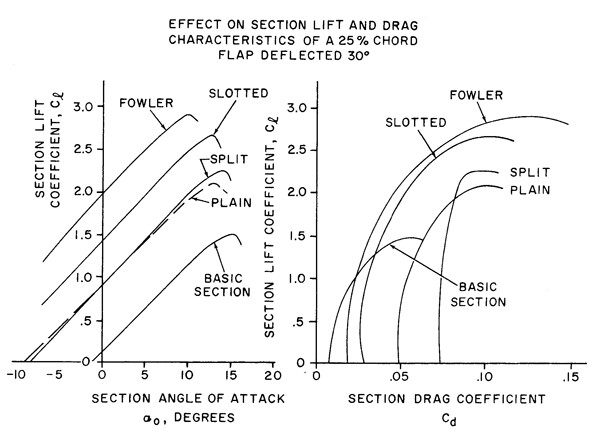 The flaps increase the camber of the wing, not the angle of attack.

I agree the graph can be misread to mean it's the flap airfoil's angle of attack. However, from its content, it's quite clear it refers to the wing's angle - cL=2 is inconsistent with any short airfoil at a=0.

Not the answer you're looking for? Browse other questions tagged wing airfoil flaps ailerons airplane or ask your own question.

73
Is it considered good or bad practice to raise the flaps right after touchdown?
13
Why are flaps retracted when an aircraft is parked on ground?
4
How does the extension of inboard flaps raise the effective critical angle of attack of the outer wing?
14
Why are the outboard Krueger Flaps retracted before the others on the B747?
15
Why were the 747SP's trailing-edge flaps so much different than those of the -100/-200?
6
How is the area of flaps determined?
2
Why are Leading Edge Flaps (LEFs) create lift while down at slow speeds but decrease lift while down at higher speeds?
3
Why is the critical AoA of most flaps 40° when most airfoils stall at 15°?
6
Why does the A320’s maximum allowable aileron deflection decrease, rather than increase, when the flaps are extended?
3
Are larger airplanes more likely to stall?