Why does Martin-Baker use a Gloster Meteor as a testbed for ejection seats?

Martin-Baker uses a Gloster Meteor for testing ejection seats, according to their website.

While it's a stylish plane, and a true delight that there are still airworthy fuselages of this plane left, it seems strange to use such an old aircraft as a testbed. 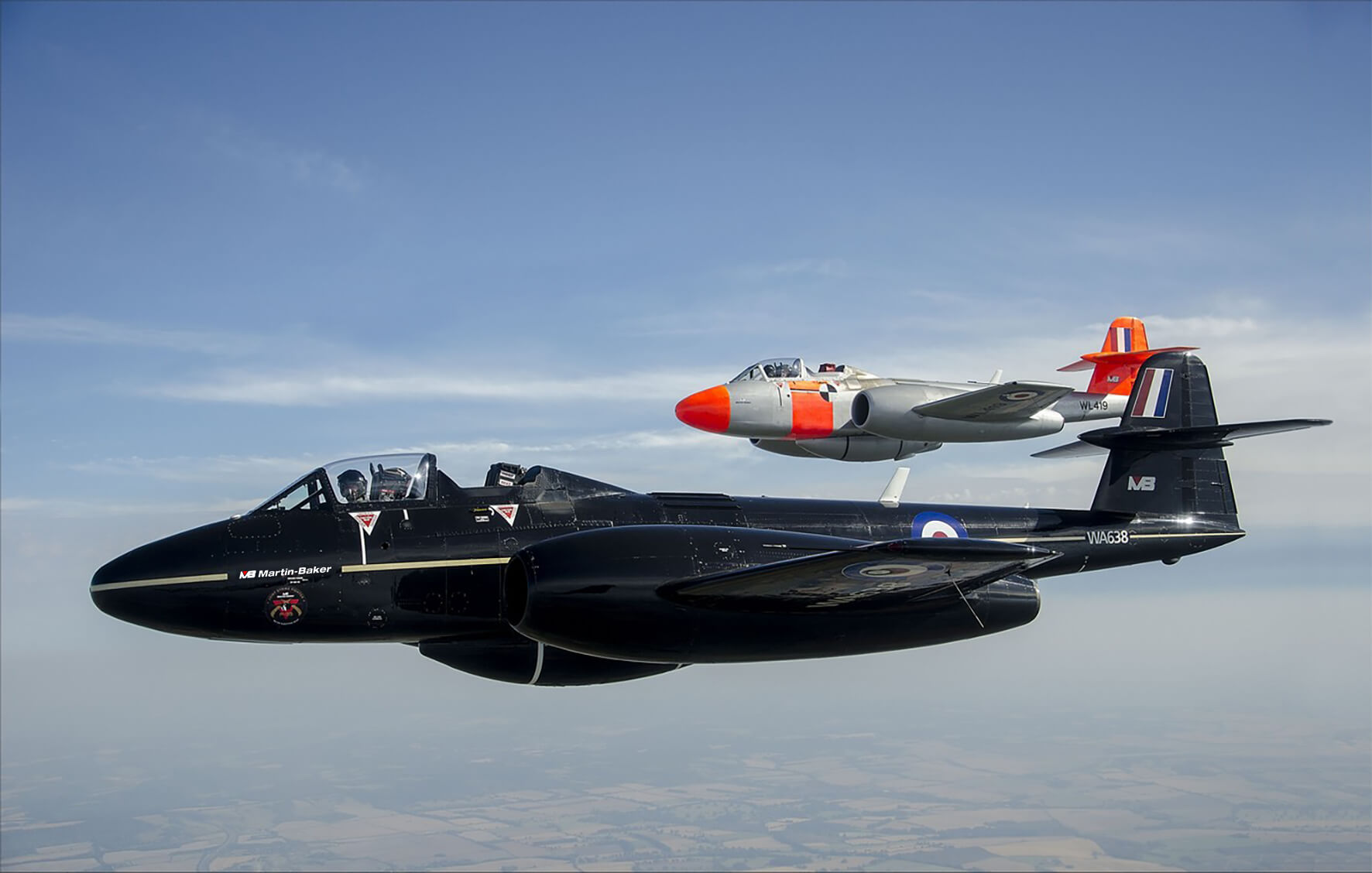 The Gloster Meteor was one of the very first turbine engine planes, made during the Second World War. In terms of electronics and structure it's a far cry from a modern fighter.

How does this make sense? Wouldn't it be better to test ejection seats in the aircraft they will be used in, with the correct structure and canopy?

Aviation week did a bit on the plane last year

"In spite of its considerable vintage, the sturdy British attack aircraft has all the attributes required for a stable, high-speed test platform" says Andy Gent, Martin-Baker’s head of flying and chief pilot. “From a test perspective the Meteor is ideal. The tail boom is fairly long and the fin is not very high. The engines are also spaced out a fair way out along the wing, so the efflux from the ejection test and exhaust from the gun and rocket motor isn’t potentially going down the engine intakes,” he says.

Based at Martin-Baker’s Chalgrove, England, test facility, the fleet is made up of two Meteors, WA638 and WL419, both of which have been with the company since the 1960s. “They are doing the job so why would you ever go through the heartache of getting another aircraft?” says Gent.

In short, it does not fly all too much, it gets the job done and its well built. Similar reason most older aircraft are still flying these days.

The article goes on to say that they have little intention of changing this any time soon:

Marketing Director Andrew Martin notes the company is one of only a handful that performs airborne ejection tests, and that the Meteor will continue to be used for the foreseeable future. “It is a tough thing to evaluate, and right now while we have these phenomenal assets we are not going to really think about a replacement in great detail,” he says. With the final retirement of the last Royal Air Force (RAF)-operated aircraft in the target towing role in the early 1980s, Martin-Baker acquired a large stock of spares and Rolls-Royce Derwent 8 turbojets. Because of that and the ample remaining airframe life, the company is no rush to find a successor.

Also a bit of a side note, this is not their only testbed. MB also uses a high speed sled for testing at their Langford Lodge, Ireland facility. This allows ground testing of the seats at flight speeds. They also test static scenarios in what appears to be cockpit mock ups as generally speaking seats are certified for Zero-Zero use. Varying governing bodies may require different testing and live demonstrations as per their certification process leading to different testing procedures.

One other factor to consider... Aircraft designed in the pre-computer era tended to be overbuilt, as they didn't have the computational power to calculate stress loads to the level of detail that can be achieved today.

Since ejection does put some unusual stress on the airframe, not normally a concern as ejection is almost always followed by a crash, it makes sense to use an older, stronger airframe that is less likely to suffer from the stress of multiple ejections.

How many DC3's are still flying?

It is neat to see Meteors still being used. A handsome aircraft.

Another advantage on using the same aircraft is that the aerodynamics are constant so you eliminate one variable in the test.

Eg when testing a new model, you can compare its performance with the test of the previous model in the same airframe and you don't have to worry about any differences in the the airflow around the fuselage and cockpit as they are the same. Also the seat will fall through the wake of the aircraft and this can vary greatly from aircraft to aircraft.

Not the answer you're looking for? Browse other questions tagged fighter ejection-seat or ask your own question.

4
Do any companies offer 'ejection' experiences?
2
How are ejection seats tested?

22
Is there a minimum altitude for ejection seats?
12
Why does the F-111 have a capsule ejection system rather than a conventional system?
4
In a fighter jet, what is the average weight of the ejection system?
5
Why don't tanker aircraft have ejection seats?
0
Why do fighters not use thrust burst from under the wings for improved maneuvering?