Would the Wright Flyer have flown better with thicker airfoils?

The Wright Flyer(s) flew with very little wing thickness,would they have flown higher, faster and longer if the wings had greater thickness?

Secondly, how do thickness and camber affect a wing's performance?

Would the Wright Flyer have flown better with thicker airfoils?

The Wright Flyer: Probably no. Most other aircraft: Definitely yes.

Thin airfoils are best at one specific angle of attack and their drag increases rapidly if you move away from this angle in both directions. The small leading edge radius will only let the air negotiate the leading edge properly when the stagnation point is right in the center of the leading edge, which happens at the design angle of attack. Then a thin airfoil works really well - that is why slotted flaps should be thin: Their flow is directed by the wing ahead of them.

The Wright Flyer I had just enough power to stay airborne at its lowest drag speed, so it flew at just one angle of attack. Of course, the Wright brothers had too little knowledge of aerodynamics to select just the right camber to place the design point of the airfoil into its operating point. The camber on the Flyer I was probably too high, because in later airplanes the Wrights reduced airfoil camber. Not a thicker, but a different airfoil could most likely have shown better results.

Why did the Wrights use a thin airfoil, anyway? They followed the advice of Otto Lilienthal who designed his airfoils from cross sections of bird wings. Birds can vary their wing camber in flight, so they adjust the wing such that the stagnation point always sits in its optimum position. Lilienthal even discovered that thick airfoils performed better but did not understand why and preferred to follow Mother Nature in his airfoils.

So the Wrights followed Lilienthal and used thin, highly cambered airfoils resembling the cross-sections of birds' wings. They were misled to believe that airfoils of that sort produced the highest ratio of lift/drag. There is in fact much truth in this conclusion if data are taken for small wings at the low speeds the Wrights used in their wind tunnel tests.

The two main advantages of a thick airfoil are 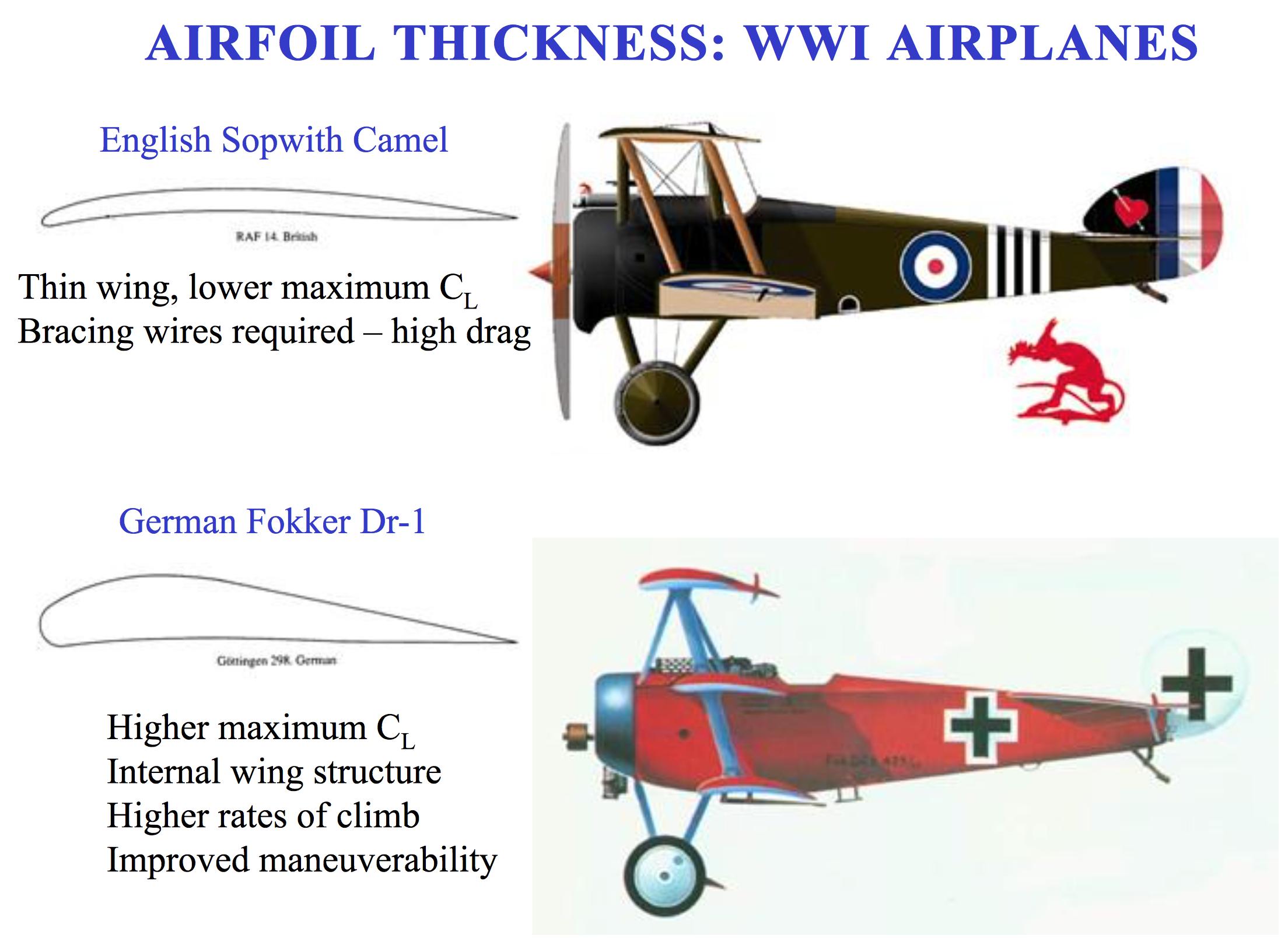 Just to disprove the misconception that thin airfoils have a poor L/D: They haven't, at least in a small angle of attack region. Below are the L/D and lift curve slope plots of the Gö 417 airfoil, something like the lab mouse of thin airfoils. To achieve a lift coefficient of nearly 1.6 at a Reynolds number of 1 million is quite an achievement, and doing so at that low drag doubly so.

There were several other limitations on the first Flyer besides the airfoil -- the engine weighed four times what the brothers had been promised it would (because the block was cast, rather than fabricated from sheet), and would have been underpowered by today's standards even if it had delivered to spec. The whole machine came in just under 300 kg; a modern ultralight that size would weigh less than half as much and have nearly twice the power.

Given those limitations, the airfoil is a relatively minor consideration. Yes, there are modern airfoils that would perform better in terms of coefficient and lift-to-drag -- but the thing that would have helped the most would have been saving 40 or so kg. on the engine weight.

It's worth noting that through the First World War, with aircraft flying at four or five times the speed of the first Flyer, at altitudes up to 4000+ m, inverted and other aerobatic maneuvers, what we'd call relative thin, cambered airfoils persisted. Look at the wing section of a Sopwith Camel -- though slightly thicker and more deeply cambered than the original Flyer's airfoil, it was still thinner than anything you'll find today except on single-surface hang gliders and ultralights.

How thickness and camber affect flight characteristics is subject matter for a full length college level textbook, but short version: more camber tends to increase lift coefficient over some range of angle of attack, but increases drag in proportion; adding thickness increased coefficient over a broader AoA range, with less drag increase, but has less effect at low AoA than increasing camber. There's a compromise, with both increased by similar amounts, that includes the well-known Clark Y, NACA 6409 and 6412, and many other common airfoils used in general aviation, especially when wood and fabric were the building materials.

Not the answer you're looking for? Browse other questions tagged wing airfoil or ask your own question.

15
Why do older airplanes have a wing on both the top and the bottom of the aircraft?
8
Can a steady flow have stagnation points?
3
What does leading edge radius mean?

19
How does chord length affect wing design?
23
What was the first aircraft that could fly inverted?
10
Are there any contemporary advantages in favor of wing warping?
5
What would be the effect of skinning over the gap in fixed leading-edge slats?
0
Winglet design and airfoil selection
0
Do stall strips mean that wing washout is not required?
1
Circular arc airfoil wing: why does the wing nose down twist due to camber?
1
How to reproduce NASA/Langley airfoils for general aviation with long chord lengths?
0
Is the ratio of HP to weight constant for identical air frames of different sizes? (See Scenario)