Why does the diffuser section generate thrust in a jet engine?

I am studying the thrust distribution of jet engines. But I'm now a bit confused.

In Rolls-Royce's "The Jet Engine" book, 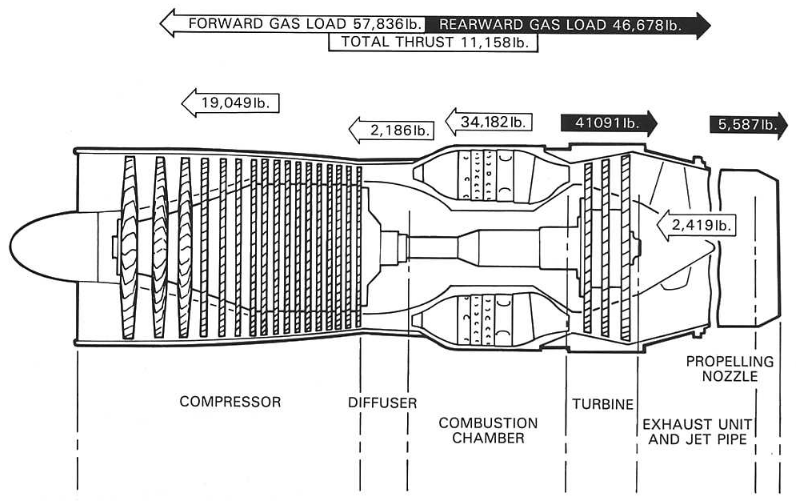 The similar conculsion is also shown here: http://www.pulse-jets.com/phpbb3/viewtopic.php?t=2183, that the diffuser is providing positive thrust by calculating the pressure force.

What's wrong with my understanding?

But why is the diffuser also providing forward thrust?

The diffuser slows down the flow to ease fuel-air mixing and combustion a bit later. If you only focus on entry and exit speeds, there would be no thrust.

However, if you look at the pressures on the diffuser walls, a different result emerges. Slower flow means higher static pressure, and the total pressure right at the compressor exit is already the highest within the whole engine. The pressure on those widening diffusor walls does indeed push the engine forward because of the forward slant of the pressure vector (which acts perpendicularly to the diffusor walls). Your linked pulse jet page explains this quite well.

Of course, no thrust would result if the flow were not heated and thus accelerated further downstream. So the diffuser all by itself will not create thrust; this happens only when it is placed inside a working jet engine.

And also why the nozzle is providing rearward thrust?

This is not always the case, but here the nozzle has a converging shape which helps to accelerate the subsonic flow and converts the remaining pressure to speed. The walls now have a backward-facing slant, so the pressure vector on them will contribute a backward-facing component. In addition, the high flow speed along the large nozzle walls causes some friction, which needs to be considered, too.

For a comparison, look at the cone behind the turbine wheels. Its thrust contribution only stems from the forward-facing pressure acting on it.

And shouldn't a diffuser be providing rearward thrust, as the outlet speed is slower than the inlet speed, and so $\dot{m}\times(v - u)$ is negative?

Conservation laws in physics are an excellent tool. They let you calculate a lot without looking at the minutiae details of the actual process. And this is great example: you can trivially calculate thrust of the whole engine from the change of momentum of the working fluid. But that won't tell you how the force is actually applied, only the sum of the forces on the entire engine.

And it's no different in the sprinkler. The pressure inside is acting on all the walls, but there is a bit missing in the nozzle where the water flows out, so the force on the opposite wall prevails.

Not the answer you're looking for? Browse other questions tagged engine jet propulsion fluid-mechanics thrust or ask your own question.

37
Why do gases in the combustion chamber only flow one direction to the gas turbine in a jet engine?

17
Why is max endurance different for jet and props?
3
When is jet engine thrust maximum?
1
What is the link OR difference between change in momentum & pressure difference?
5
Why is thrust said to be constant over speed for a jet engine?
1
How do power and thrust curves compare?
0
Can thrust be produced only using the forward speed of a nozzle?