How is a light plane's nose wheel straightened during retract?

Assuming a light aircraft has direct cable linkage to the rudders, during taking off in a very strong crosswind with the pilot correcting with hard rudder, what keeps the nose wheel from remaining off center and jamming as it retracts? 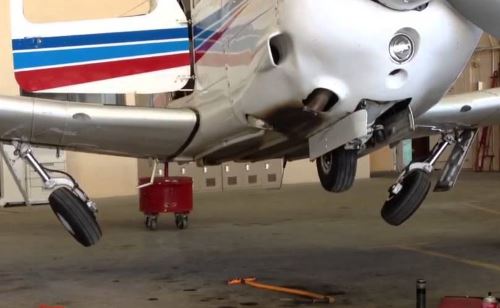 With the weight off the nose gear after rotation, the strut extends to the unloaded position, and the two internal cams shown on the right mate and center the nose gear.

Centering cams built into the shock strut structure accomplish this. An upper cam is free to mate into a lower cam recess when the gear is fully extended. This aligns the gear for retraction. When weight returns to the wheels after landing, the shock strut is compressed, and the centering cams separate allowing the lower shock strut (piston) to rotate in the upper strut cylinder (FAA).

On a Cessna 172RG this is achieved by the centering block (circled on the left) during retraction. The rudder is still allowed to move through a bungee link.

Kinematics of the system automatically straighten the nose wheel as the landing gear is retracted. During retraction, the centering block on the upper torque link aligns and locks the nose wheel in the neutral position. Continued free movement of the rudder pedals is assured by the steering bungee (Cessna 172RG service manual). 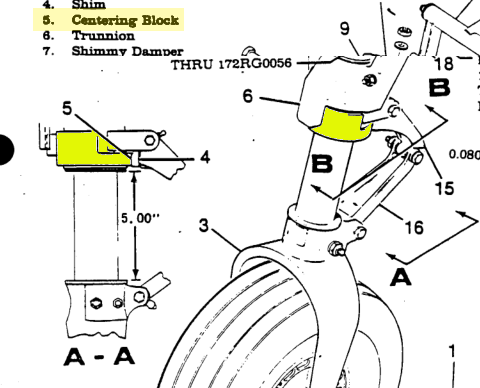 Not the answer you're looking for? Browse other questions tagged flight-controls landing-gear rudder or ask your own question.

12
Why does the Cessna 152/172 nose wheel turn only when the aircraft is moving?
4
What is the maximum control surfaces deflection on a Cessna 210N?
3
How does pulling back provide better steering during rollout for light GA planes?

9
How difficult is it to avoid ground loop in practice?
28
When does an airliner switch from using the tiller to the rudder?
3
How does pulling back provide better steering during rollout for light GA planes?
7
Why does the A320 use the rudder for lateral control in mechanical law?
7
How are the 747-400 rudder pedals and tillers connected to the nose wheel?
7
How to use Rudder during takeoff in single engine propeller aircraft? e.g. Cessna 172
5
Why do the A320’s primary flight controls have hydromechanical backups only for the rudder?
9
Are 737 pilots required to train in manual-reversion flight?
15
How controllable is the 737 in single-engine manual-reversion flight? Is it controllably landable (or go-around-able) in this condition?