Could vortex generators be used to preserve aileron authority during a stall?

I know that using aileron input in the approach to a stall is generally inadvisable; what if vortex generators are placed at the wingtip (where the ailerons sit), meaning that the ailerons will still have roll control authority available even when the rest of the wing is stalled? In this case, would aileron input be permissible?

Vortex generators re-energize the boundary layer and can slightly postpone flow separation at high angles of attack. Therefore, adding them in front of a control surface is a realistic way of retaining authority. In fact there are real life examples: 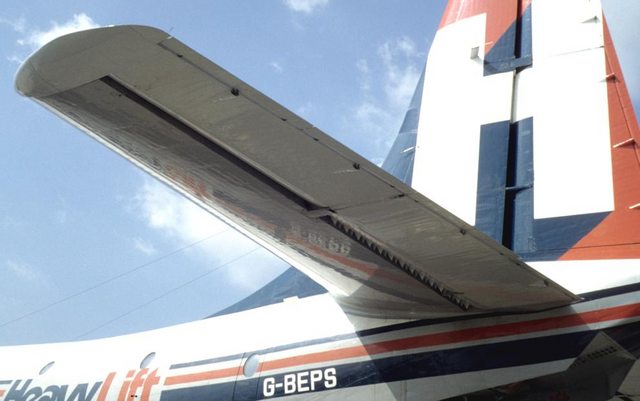 That being said, these devices are a crutch that is best avoided on clean-sheet designs. They add drag in every flight condition in exchange for some more margin at high alpha, this margin could be achieved by designing the aircraft better in the first place. That is why you will mostly see vortex generators applied as fixes late in the design process or as outright aftermarket modification kits. This constant penalty is compounded by the extra maintenance needed to keep the VGs clean and in good condition.

Ultimately, re-energizing the boundary layer can only do so much to prevent separation. A hard down aileron input at high angle of attack can stall the wing even with VGs, they are not a silver bullet.

I wouldn't dismiss them so lightly. On my Cessna Cardinal, the VGs from MicroAeroDynamics https://microaero.com/ did wonders to improve the airplane handling at slow speeds - the airplane is responsive at slow speeds now, has the same feel as at higher airspeeds (like 25-30mph faster), and really increased my confidence at low airspeeds. I used to fly out of a 1680 foot strip, coming in over tall trees. Hot days, low winds, it was a real challenge to get slow enough to get on the runway before midfield and stop before hitting the fence at the far end. After the VGs, it became no problem at all - so much easier to get the plane flying slower and still handle well, it was no problem to be on the ground well before the midfield mark and turning off before the end.

The only time I stall anymore is during flight reviews with instructors, and I have to really work to get the plane to stall, power off or power on. And when it finally does, just pushing the yoke forward recovers it immediately, with little wing dip to either side. Same with unusual attitude recovery, a little push and aileron correction and straight & level is returned.

Not the answer you're looking for? Browse other questions tagged wing stall stability ailerons vortex-generators or ask your own question.

14
Why do most GA aircraft not have vortex generators?
3
Would a wingtip stall still be bad if there was no aileron there?

4
Do high-speed ailerons help with the roll rate control in non-FBW?
13
What is the aerodynamic motivation behind vortex generators?
8
Can an aileron stall in-flight?
6
Why does the A320’s maximum allowable aileron deflection decrease, rather than increase, when the flaps are extended?
0
New Research: VGs increase lift to drag ratio up to 880%. Does it work for flaps too?
3
What is the term for an aileron that’s also used as a ground spoiler?
1
How does vertical stabilisation work?
5
How are the 737’s elevator and aileron cables attached to their control tabs without impeding the control surfaces’ motion under hydraulic power?
5
Why doesn’t the A320 have any provision for manual aileron trim?
0
What suits best for lateral controllability at high Angle of Attacks- a vortex generator or wing slots?