Are there regulations for water skiing in a ASEL aircraft?

What are the regulations regarding water skiing with ASEL aircraft, as in touching your tires down in a particular body of water such as a lake or river? Sometimes referred to hydroplaning. 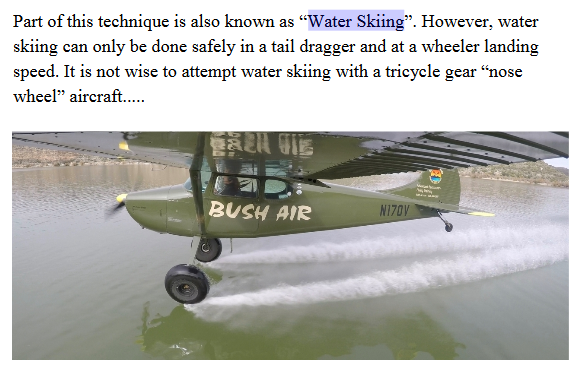 I couldn't find any regulations for it. But the closest thing to an official mention of it I found was in a 2009 piece on Anchorage Daily News, where an unlicensed pilot water skied, hit a sandbar, and it didn't end nicely for his Super Cub.

The practice is called water-skiing, and it is not encouraged. It was developed for landing in tight quarters, like sand bars where space is short, but doing it wrong can be disastrous.

No regs against it but is strongly discouraged. If an accident did occur, you’re likely to be cited under 14 CFR 91.13 Careless and Reckless Operation and the incident will probably be used as evidence in a Wrongful Injury/Death lawsuit.

The original useful purpose for skimming was to allow landing by bush planes in tight areas near water. This is what is meant by skimming:

and there are no specific regulations against doing it.

No "hydroplaning" with tires or "skimming" with skis is not illegal.

Youtube clip of Bob Reeves landing on mud flats in 1938.

While most of use know the rating as a "Float Rating", the FAA officially designates the privilege as a "Seaplane Rating". Therefore the aircraft must be in a "seaplane" configuration in-order to require a special license.

Amazingly, the FAA does not require a sign-off or special training for skis - despite the fact there can be as much or more of a difference in technique compared to the mandatory tail wheel sign-off!

Not the answer you're looking for? Browse other questions tagged faa-regulations bush-flying or ask your own question.