How does wing bending relief of an a340 compared to an a330 allow it to carry 30t more fuel in a center section of nearly identical wings?

From this question this reference in ymb1's answer states that the a340 and a330 have nearly identical wings.

The reference states that bending relief by having four engines instead of two is the reason 30t more fuel can be carried in a wing center tank.

How can moving 4t (per engine) outboard 10m create enough bending relief to add 30t in the center of the wing?

Short answer: they lied, it's 12, not 30 tonnes extra carrying capacity on the A340 due to being a quad.

How does an wing-mounted engine provide extra payload?

The weight (force) of the engine times the distance to the wing root is a torque (force * distance) that bends the wing down. The farther out the engine, the bigger this torque.

This downward torque reduces the upward torque (from the lift) experienced by the wing. You can think of it as the lift force from the spanwise aerodynamic center $y_{MAC}$ to the wing root -- more on that in a bit. So, if the plane is wing-limited (structurally), any extra bending relief will allow more weight to be lifted.

It was also why the 707 had better payload compared to the Vickers VC10 (its 4 engines are tail-mounted). The wings had to be built stronger (heavier), which ate into the payload (vc10.net).

That is one of the reasons that especially the Standard VC10 is more expensive to operate than a 707, its structure is slightly heavier for the same number of passengers (25,7% of MTOW as opposed to 24,6% for the 707).

No. It turns out Airbus was lying. But it does account for some.

The 330 was intentionally being held down in takeoff weight and performance because they didnâ€™t want it to overlap the 340.

The A330 (and A340) like many jet-liners gain MTOW as they fly more. Small steps at first after design validations, then big steps after modifications. So in order to have a fair comparison, we need to go back in time.

(Graph: Airbus) A330-300 MTOW increase over the years. Note that the neo starts at where the ceo left -- at 242 with further development to reach 251 tonnes as announced in March 2018 (leehamnews.com).

Are the 15 tonnes due to the outboard engines?

Yes. First, back to the $y_{MAC}$. See: Where is the lateral position of the aerodynamic center?

Calculating it for the A330 based on its available plan view and ignoring the Yehudi gave me an 8.9 m figure (from wing root). Taking into account the complex shape would, I believe, move it farther inboard, giving the engines an even bigger edge -- so we are okay there. 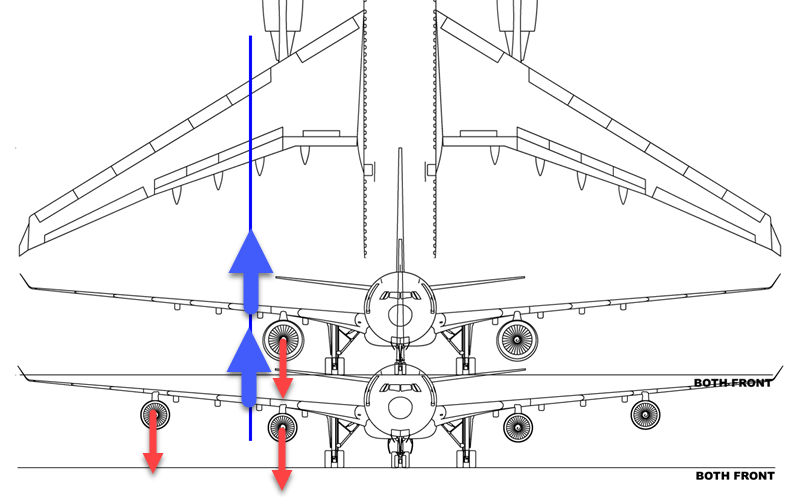 11.67 tonnes of the 15-tonne gap are indeed due to being a twin and not a quad. The remaining 3.33 tonnes are likely due to my lenient $y_{MAC}$ -- moving it more inboard gives the engines more credit.

If you are wondering about the original 204-tonne figure, then they held back 16.3 tonnes (72.6g kNm per side). So the original statement should have been an approximately 12 tonne extra carrying capacity, not 28 (or 30) -- but they didn't want to hurt the A340 sales.

Not the answer you're looking for? Browse other questions tagged aircraft-design aircraft-structures or ask your own question.

12
What is the purpose of a wing Yehudi?
7
Are two twin-jet flights more efficient than one quad-jet flight?
4
Where is the lateral position of the aerodynamic center?

5
Is the twin vs quad engine industry preference really challenged?
7
Could Mach 1.4 be a better design point for SST?
6
What are the issues involved in converting a quadjet into a twinjet?
5
How did shortening the 707 increase its range?
8
Why does the A330 sit nose-down on the ground?