Are two twin-jet flights more efficient than one quad-jet flight?

Ignoring for this question the issue of flexibility for the airline, would it be more (fuel, cost) efficient to have a single flight with a 4 engine plane than to have two flights with 2 engine planes.

I imagine, that 2 flights of twin-engine planes move more dead mass than a single flight of a quad-engine plane with the same capacity.

The sales figures tell it all. The majority of airlines prefer twin-jets. From businessinsider.com:

Even though the 787 has a newer generation engines compared to the A380, the fact that the 747-8I (the passenger variant) didn't sell well confirms the above.

(wikipedia.org) Fuel per seat figures for a 7,200 NM sector.

A major issue in comparing is finding: 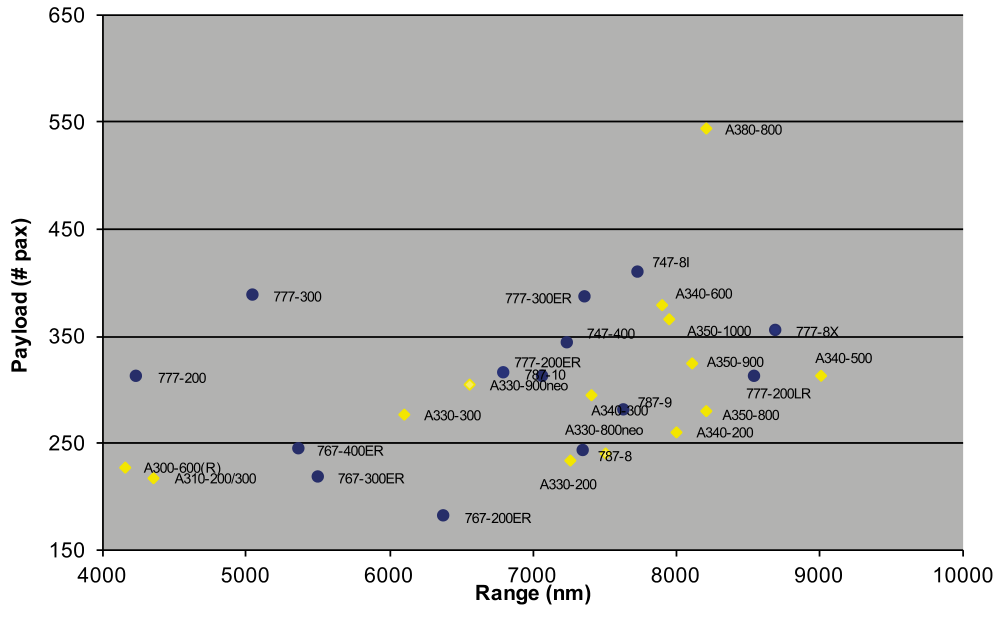 RE edit and comments:

They fail one of the conditions above, the 350 and 380 have different engine generations. And it's like the Qantas 787/380 example above.

Would there be a twin & quad combination with roughly the same age?

The A340 has longer range because the outboard engines on the A340 increase the bending relief, allowing 30 tonnes more fuel (flightglobal.com):

Limiting the 747 to the 767's range is again not fair, because of the fuel the 767 will have to carry to reach its max range, while the 747 will breeze by because it won't carry its full fuel load. See this related post: How much fuel is burned to carry the trip fuel?

Not the answer you're looking for? Browse other questions tagged airline-operations efficiency or ask your own question.

12
Why are twin engine airliners more fuel efficient than three or four engine airliners?
12
How much fuel is burned to carry the trip fuel?
10
Why aren't larger airliners such as the A380 more efficient than smaller ones?
4
How does wing bending relief of an a340 compared to an a330 allow it to carry 30t more fuel in a center section of nearly identical wings?
-4
When are more engines better than not on a plane?

4
Are the Boeing 747-8 engines more efficient than the 747-400 engines?
10
When are multiple hops more efficient than single leg?
19
Are turboprops more efficient than piston engines (thrust per fuel consumption)?
21
Why the lack of faster piston-powered planes?
0
Are two little engines or one big engine more efficient for an ultralight?
5
Why do airlines require passengers to return to their allocated seats for landing?
16
Can the plane Celera 500L be eight times more fuel efficient than a jet of similar size and capacity?
1
Can an airline schedule two same-number flights to leave the same airport on the same day?