How are procedures for curved-runway operations different from those for straight runways?

Runways having a significant curve between the two ends aren't exactly common, but they do exist, one good example being Elk City Airport's runway 14/35.

When operating to or from an airport with a curved runway, what does one have to do differently than with a straight runway?

I know that KAVX has quite a hump in the middle of the runway which does not allow for departing aircraft to see all the way down the runway, and I'd imagine that the procedures are the same as they would be for Elk City Airport. The Facilities Directory/Chart Supplement for KAVX says:

PILOTS CANNOT SEE ACFT ON OPPOSITE ENDS OF RWY DUE TO GRADIENT, MUST ANNC TAKING ACT RWY ON UNICOM PRIOR TO DEP

Essentially, communicate your intentions on the common traffic frequency. Where you are taxiing, what runway you are using and when you're about to take off. Also be vigilant watching for traffic that may be using the opposing runway.

On a curved runway, Your main concern is that someone else would be approaching or using the opposite runway while you are using the other end. This is even recommended in the Chart Supplement for Elk City, which says

As far as actually taking off on a runway that is not straight, you'd need to take into consideration obstacles around the runway environment. In the case of Elk City, I'd hold off on rotating until after the bend so that I can climb straight out and get above tree level prior to making a turn. It appears as though that is in line with the Chart Supplement instructions, as landing RWY14 would give you the longest length to land and start to slow before you had to make the turn, and taking off on RWY35 would have you turning prior to rotation speed (or at least shortly thereafter). 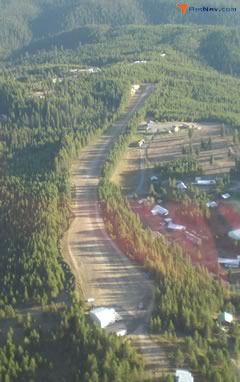 20
What are the most efficient layouts of multiple runways?
11
What determines crosswind limits?
11
How do Rapid Exit Taxiways improve aircraft movements?
8
What are the pros and cons of practising figure-eight landings on perpendicular runways?
8
Why did this aircraft take off in the opposite direction compared to the one used by other flights right before/after it?
28
Why do airports in the UK have so few runways?
2
Why isn't runway 4L/22R at KMDW available as an emergency runway?
2
Why do most U.S. cities with multiple airports try to concentrate airline operations at just one airport instead of spreading out the load?
7
Why did KJFK keep using runways 22R/L here instead of switching to 13R/L?