Sweep is not strictly required, but helpful to increase supersonic L/D. Just witness the length to which aircraft manufacturers went to sweep wings for Mach 2+ flight. However, sweep comes with its own set of problems.

A little more on the F104 vs sweept wings. In order to optimize a design for a given mach number greater than 1.0, the wing needs to be entirely enveloped within the mach pressure wave cone. Hence, large area with sweep or small area short and straight. Conversely, a long straight wing would be partially inside the mach cone and partially outside (not optimum).

Wing sweep is not required on supersonic aircraft. The F104 was a mach 2 interceptor with a straight, but tapered wing. It wasn't a well respected aircraft.

The Lockheed tests, however, determined that the most efficient shape for high-speed supersonic flight was a very small, straight, mid-mounted, trapezoidal wing. 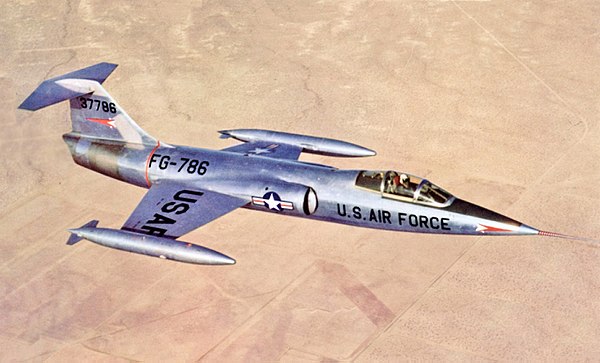 You will generally want to have a Swept Wing for supersonic aircraft as the swept wing delays the formation of shock waves. The type of drag that a swept wing prevents is Wave Drag and would be a major source of drag at supersonic speeds. I believe that the "Area rule" that you are quoting refers only to parasitic drag. You may want to read this Wikipedia article on swept wings to learn more about their benefit. The main downside of using swept wings is wing tip stall but that can usually be overcome with a Washout design.

Another example of a supersonic aircraft that did not have swept wings is the Bell X1, the first aircraft to achieve supersonic speeds (and survive the experience). Given that the aircraft was pushing the unknown, the fuselage was shaped like a .50 caliber bullet, an object known to go supersonic smoothly... trial and error was a factor in pre computer aircraft design.

Note, though, that like the F104, the X1's wings are fairly short and set back on the fuselage, so that they are inside the shock wave cone coming off of the nose at supersonic speeds. As the X1 could barely go beyond Mach 1, its wings weren't as narrow as the F104, whose top speed was Mach 2.

19
Why do some military aircraft use variable-sweep wings?
15
What is the reason for the poor low-speed characteristics of sweptback wings?
15
Acceleration of a supersonic aircraft after breaking the sound barrier
14
Why is the coefficient of drag for straight wings at supersonic speeds lower than for swept wings?

14
How does wing sweep increase aircraft stability?
32
Why did the DC-3 have wing sweep?
6
What aerodynamic characteristics arise from trailing edge sweep angle?
4
Wouldn't a triplane be much more efficient than a monoplane of same wing area and span?
5
Is airflow deflected inwards or outwards by wing sweep?
0
Could an arrow planform be better for a supersonic aircraft than a delta? Why?
0
Can wing sweep decrease total drag force at low-subsonic speeds?
1
Does the quarter-chord-angle rule still hold for wings with very long chords or large differences between leading- and trailing-edge sweep angles?
3
Comparisons between the A340 and 747-200 wing: sweep angle and span
2
Why increase chord length for supersonic aircraft (swept vs delta wings)?