What is the aerodynamic motivation behind vortex generators? 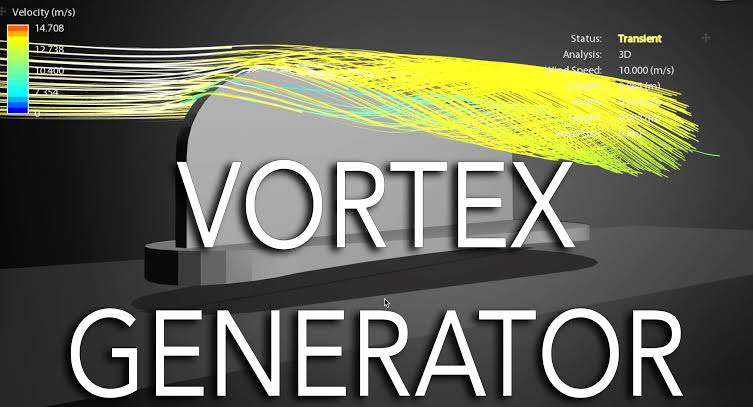 An airplane's wing creates lift efficiently when the airflow is parallel to the chord of the wing. Vortex generators twist the airstream on the wing surface.

Doesn't this kind of twisted airflow cause lift inefficiency?

They only twist the flow in a little region just above the wing surface, whereas a substantial part of the overall lift is actually being produced by a huge package of air well above the wing being induced to move downward. You could say they have a kind of catalytic beneficial effect much larger than their cost.

Yes there is energy consumed in making the vortex but that is usually offset by the drag reduction of the overall flow improvement achieved (they may be spinning, but the spinning air is a lot more orderly than random turbulence). Usually VGs are used in local areas to help re-attach detached flow, but the best example of this is the popularity of VGs used as a "poor man's slat" along wing leading edges.

When aircraft have VG kits installed on the leading edges, it raises the stalling AOA somewhat less than half of what you get with a slat or slot, not bad for a row of little metal tabs. From about 14-16 degrees for most airfoils to maybe 19-21 degrees (ballpark numbers for illustration). On many light aircraft this is good for about 4-6 mph reduction in indicated stall speed. On light twins VGs can also lower the minimum control speed to close to or even below the stall, a huge safety feature. They also tend to drastically improve stall behaviour.

You would think leading edge VGs would come with quite a cruise speed penalty, but usually the penalty is negligible if at all, because there is a small drag reduction from the reduction of flow separated turbulence at cruise that offsets the energy used to create the vortices. In a worst case, maybe a light twin with VGs will see a 3 mph hit on cruise speed, but the safety benefits are too massive for this to matter.

You are correct that vortex generators create drag, so a successful installation depends on reducing some other drag even more. Airflow separation causes significant drag that vortex generators can reduce. The energy consumed by vortex generators making drag is injected into the boundary layer, delaying airflow separation and the eventual stall, which might be of even more value. Correcting poor flight characteristics on an existing design is often where they are used. The illustration of a wing stalling is easy to understand but may not be the best use of VGs since few wings fly continuously on the brink of separation. 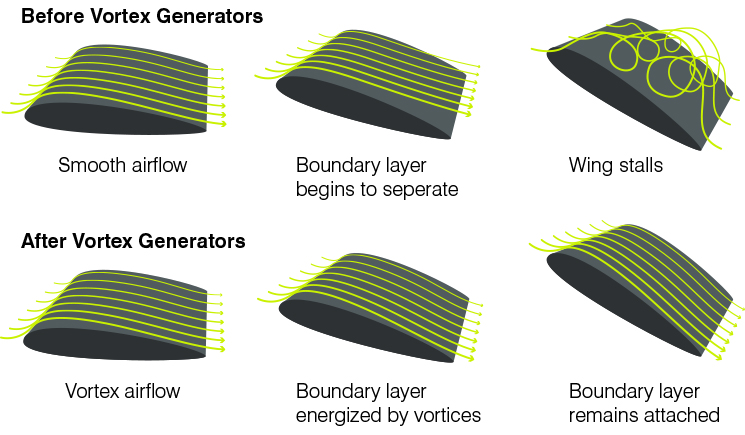 No. The vortex helps keep the boundary layer attached so lift is created for a longer time as the plane slows and the wing is tilting up & back for landing. 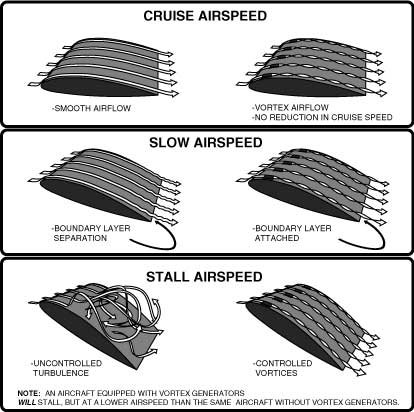 I am going to complement previous answers about VGs. All previous three answers are showing a fact:

The actual motivation to use VGs is the overall most efficient solution. Your reasoning is right, a VG is introducing drag and, for a given angle of attack a less aerodynamically efficient wing.

However, let's take the problem from a different perspective. I have an airplane that I am desiging and I have several design parameters, imagine that one of the constrains of design is that, for example, we need to be able to be able to lift the aircraft with a given weight, but that point is not the nominal point, is just one design point in the envelop you shall design for.

Essentially, at design level, you will see what is the maximum ever lift you can generate and multiply by the surface and the dynamic pressure. Dynamic pressure will be given by the design point, and your designing parameters will be surface of the wing and maximum lift.

This is bringing you to a trade off, what will providing less drag, an extra surface or a set of VGs? Given this trade-off, you've got the installation or not of VGs.

Essentially you will be using the energizing capabilities of VGs when there is a trade off in an specific condition. I have described you a condition that is sizing the size of a wing (typical from tail plane) but you can also take a look to this question where another specific condition is discussed related to the engine nacelle.

Not the answer you're looking for? Browse other questions tagged aircraft-design wing lift vortex-generators or ask your own question.

10
How does the position of vortex generators on engine cowlings affect flight?