What is the effect of fuselage weight on a model glider?

I've built a model glider and wanted to see the effect the weight of the fuselage had on its performance. It flew the further with more weight which seems counter intuitive. I can exert more force into the glider with more weight which results in greater airspeed, would this be the reason for the increased glide ratio? How does this compare to real life gliders? Thanks.

Variations in aircraft weight do not affect the glide angle provided that the correct airspeed is flown. Since it is the lift over drag (L/D) ratio that determines the gliding range, weight will not affect it.

The glide ratio is based only on the relationship of the aerodynamic forces acting on the aircraft. The only effect weight has is to vary the time the aircraft will glide for. The heavier the aircraft is, the higher the airspeed must be to obtain the same glide ratio.

If two aircraft have the same L/D ratio but different weights and start a glide from the same altitude, the heavier aircraft gliding at a higher airspeed will arrive at the same touchdown point in a shorter time. Both aircraft will cover the same distance but the lighter one will take a longer time to do so. 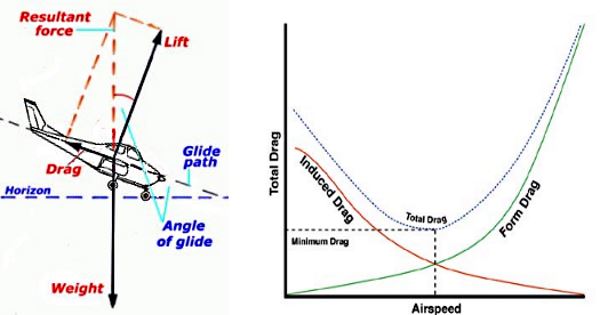 Real-life gliders require some minimum payload to have their C.G. within limits; without this they can't hit their performance numbers. For this reason it is common to ballast a 2-seat glider with a sandbag if it is operated by a single occupant: the glider pilots say that if underweight, the glider "penetrates" poorly i.e., it cannot be trimmed into a minimum sink rate state that also is comfortably above the stall. When underweight, the glider mushes along at low airspeed in a poorly-controllable state.

In my experience with model gliders, they too will fly poorly without ballast: hand-launching an underweight glider causes it to pitch up, then quickly lose airspeed and descend more like a parachute than like a glider.

Even if your ballast doesn't change the CG location, there's a "sweet spot" airspeed at which the wing is most efficient (L/D ratio is highest), and this is always faster than minimum sink speed. It's usually possible to trim a glider to fly at best L/D without ballast, but this requires nosing down, which increases sink more than adding correctly located ballast.

Not the answer you're looking for? Browse other questions tagged glider glide-ratio model-aircraft or ask your own question.

41
Why would a glider have water ballast? If it is trying to stay aloft without an engine, wouldn't it be better to be as light as possible?
5
How does aircraft weight affect the glide performance?

14
Has the FAA banned FPV for model aviation?
21
How can we calculate the benefit gained from taping glider wing roots?
10
Is this paragraph about the dihedral effect in the FAA's Glider Flying Handbook correct?
1
Aerodynamics and fuel consumption of a powered glider
1
Load testing a model glider wing
5
Would all these three things have the exact same effect on the flight duration of a glider?
2
How does the glide ratio change with velocity in a glider with air brakes deployed?
2
What are the handling effects of converting a dihedral wing to polyhedral?
2
What can be approach of balancing canard glider model?
2
In a full-rudder sideslip in a Schweizer 2-22 or 2-33 glider, is the descent rate higher at 50 mph airspeed than at 60 mph airspeed?