With ADS-C, in the middle of remote areas (like ocean), we can send position report via satellite data link. So, why ADS-B systems on airplane uses ground based stations (VHF datalink) rather than Geostationary Satellites for data transfer?

ADS Broadcast and ADS Contract are intended for different purposes. They use the same type of equipment except for the link technology, which is matched to the differing intent.

ADSB is intended to allow self separation between aircraft as well as for informing ground control of position, as a radar would. It is a predetermined set of messages that are broadcast to any nearby aircraft without requiring the interrogation of a ground based radar, as is required for a transponder. VHF is a one to many broadcast technology.

ADSC is intended to provide long distance position tracking, (and weather reporting...) as in transoceanic flight. To conserve bandwidth, there are three types of "contracts" between the aircraft and air traffic control which define the timing of messages sent. The message content in each of the contracts can vary. Only the desired data is sent on the agreed schedule. Satcom is a one to one messaging technology.

It's already here, but it's private

Your proposed geostationary orbits are very high, and since aircraft are the transmitters, that means high power antennas are required from the aircraft.

This requires no change to the existing ADS-B technology as long the antenna is top-mounted and capable of 125 watts (most airliners already support 200 W). But it is not a free service to ATC units. Interested ANSPs can use Aireon's data to supplement their own surveillance for a fee. NAV CANADA will use their services for the North Atlantic region by Q4 2018, for example.

The power demand and the provider being a private entity, explains the why not. If surveillance is meant to be publicly owned by each government to be in control of the data source, then each country will need its own constellation of satellites – sort of like the countries and regions that are launching their own GNSS constellations.

Slide 16 (shown below) is from the linked icao.int presentation. The presentation also explains how ADS-C is different:

ADS-C is an Alternative, But Has Limitations 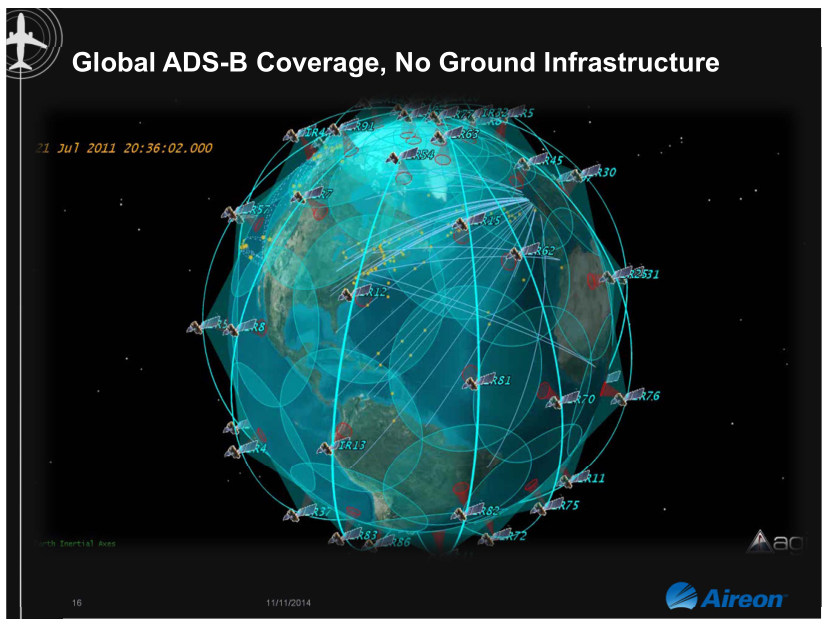 Not the answer you're looking for? Browse other questions tagged air-traffic-control ads-b ads-c surveillance data-link or ask your own question.

6
Is ADS-C used in practice?
14
How can ADS-B replace primary radar when FlightRadar24, using ADS-B, is so inaccurate?
8
Are squawk codes used with ADS-B?
5
Can I use my non-WAAS GPS receiver with ADS-B in the United States?
2
How do ADS-B and ADS-C get used on transoceanic flights?
3
Why does ADS-B broadcast velocity?
6
When will the Canadian ADS-B satellite system be implemented?
2
How does ADS-C and FMS relate to FANS?
7
What is the broadcast rate of an ADS-B message?
7
Question about congestion of the 1090MHz frequency