Under the investigation section of US Airways Flight 1549, it is noted that

[The pilot] asserted that insufficient credit was given to the A320's fly-by-wire design, by which the pilot uses a side-stick to make control inputs to the flight control computers.

The computers then impose adjustments and limits of their own to keep the plane stable, which the pilot cannot override even in an emergency. This design allowed the pilots of Flight 1549 to concentrate on engine restart and deciding the course, without the burden of manually adjusting the glidepath to reduce the plane's rate of descent.

Although this design aids pilots most of the time, why is there not a 'last resort' option to override the computer-imposed limits? It could have been that in this incident, it was the difference between life and death / a 'hard landing' vs a complete hull loss.

Disabling the protections can technically be achieved. I say technically because there is not one scenario that Airbus has envisioned that would require the pilots to deliberately go into direct-law.

The imposed limit in the question is something called alpha-protection -- a protection against pulling back too much that the plane stalls. Stalling is bad. The system was receiving the correct information and functioning as designed, so what did Captain Sullenberger mean?

This is what Wikipedia says. The reference is a Talks at Google lecture (around the 40-minute mark). What is left out from Wikipedia, which Captain Sullenberger covers in the talk right away -- and is present in the accident report -- is that the issue was not with the protection, but with the innards of the protection that Airbus did not cover in the training material. Below is the relevant section from YouTube's transcript:

I was commanding for more, pulling back full aft on the stick and the flight control computers prevented me from getting more lift therefore we hit harder than we would have (...) It turns out there's a little-known software feature known only then to a few Airbus software engineers, and to no pilots to no airlines that was the case. It's called a phugoid mode. And it was not the way we were trained the airplane should work, apparently it is the way the airplane does work. But that was not apparent to us.

This was addressed as a recommendation in the final report:

Require Airbus operators to expand the angle-of-attack-protection envelope limitations ground-school training to inform pilots about alpha-protection mode features while in normal law that can affect the pitch response of the airplane.

Providing training on the innards of the 'good' system, is far better than taking out a vital protection. Vital because of one thing the report points out (which is in no way a disparagement of the crew):

The NTSB concludes the captain’s difficulty maintaining his intended airspeed during the final approach resulted, in part, from high workload, stress, and task saturation.

Protections are good for such high workload, stressful, and task saturated situations.

Computer limits can be overridden on an Airbus as a ‘last resort’, though I have serious doubts that would have helped with the landing on the Hudson incident.

Granted, getting out of Normal Law is not SOP, or a normal procedure..but then again, why would it be?

Control laws will protect the aircraft/airframe in the same way. Or like an automatic shift will protect from overreving your engine by shifting up. Can you still blow up an engine on an automatic? probably yes, you just have to try harder....

Really wished pilots who never flew Airbus (or better yet Airbus and Boeing) stop issuing opinions and comparisons on this matter. FBW system in Boeing’s 777 is very similar to Airbus for instance, so the very discussion of Boeing trusts the pilots vs Airbus trusts the computers is starting from a very wrong assumption.

As seems to be usual, Airbus and Boeing have differing points of view based upon their experience of working with pilots - guess which is which.

So the answer to your question is simply the manufacturer's philosophy.

Why there is no switch? Because having it could be dangerous.

The purpose of the computerized system is to reduce pilot's workload. It's achieved by allowing him to pull the yoke all the way back and the computer would give him the highest safe AoA. Adding a switch would increase pilot workload, because he would have to make a very deliberate decision whenever to override the computer or not. Spending time considering cons and pros of overriding the computer diverts pilot's attention from actually flying the plane. Nobody wants that, especially during an emergency.

Mere presence of such option could contribute to the accident, therefore you can't have it.

The control laws can be downgraded to alternate law, which removes the alpha protection.

The QRH recommends this only in certain situations, and dual engine failure is not one of them. One place where this is recommended in the QRH is for an unreliable airspeed indication. Usually an unreliable airspeed will be recognized by the aircraft and it will automatically switch into alternate law. This is what occurred on AF447. But there are scenarios where the computer may discard the correct data, or none of the airspeed data is valid, yet they match, so the computer doesn't catch it.

Airbus realizes that this may cause incorrect response of the alpha protection, so they have a procedure for dealing with it. They have the pilot switch off the ADR's* one at a time to see if they can isolate the faulty data. If they can't, or none of the ADR's are providing good data, they are instructed to shut down two of the ADR's to force the system into alternate law. The third ADR is to be left on because the stall warning can still function on a single ADR. 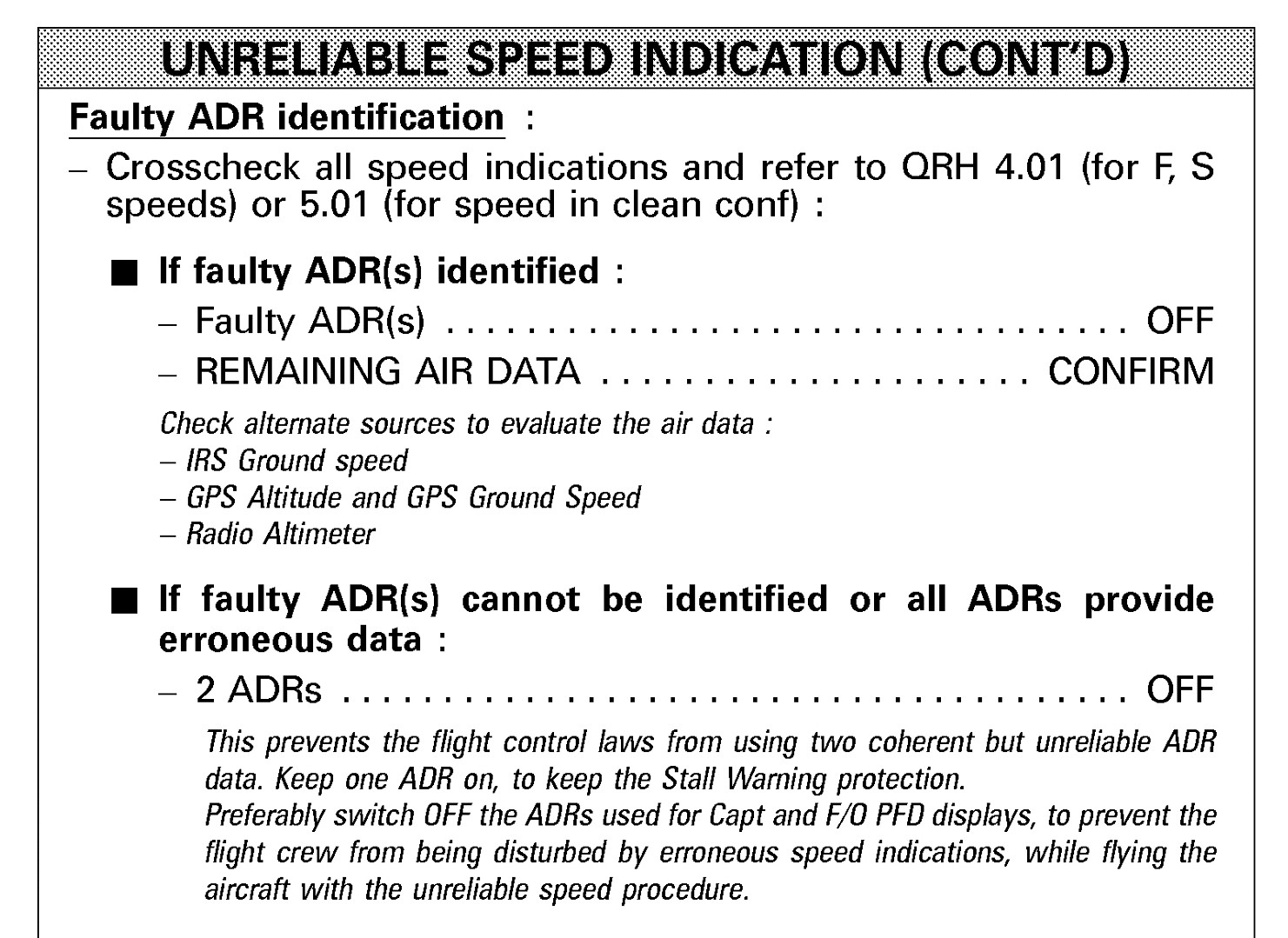 *The ADR (Air Data Reference) is part of the ADIRU (Air Data Inertial Reference Unit) which is the computer that supplies airspeed, Mach number, angle of attack, temperature and barometric altitude data to the FBW system.

For the Airbus fly by wire system there are different so-called control laws which govern the behavior of the aircraft according to the input provided by the pilots. These control laws are determined automatically by the aircraft for different phases of the flight envelope.

This is also the main difference in design philosophy between Boeing and Airbus. Boeing aircraft assume that the pilot is always right and Airbus has a computer between the sticks and control surfaces. In this way they can filter the input from the pilot such that the aircraft does not exceed its designed airframe loads. Another benefit of this system is that they can make their range of aircraft handle in a similar fashion.

Can you override the control laws on an Airbus jet? No, you can't. Why can't you? Simply, Airbus design philosophy is that if the computer can't save the aircraft you can't either. You can however force it by pulling circuit breakers since after an electrical failure you as a pilot have direct control over the aircraft without the computer imposing limits. However, this is not possible during an emergency.

You can read more on the control laws here: Airbus Flight Control Systems

There have been incidents where the computer almost crashed an aircraft by switching too early to a different control law (Lufthansa LH-44):

Not the answer you're looking for? Browse other questions tagged safety airbus-a320 accident-investigation fly-by-wire us1549-accident or ask your own question.

14
Can computer imposed inputs be overridden on the Boeing 737-MAX?
17
How does envelope protection work in Airbus vs. Boeing aircraft?
5
Does the A320 Trimmable Horizontal Stabilizer automatically reset after landing?

3
Which computer controls auto thrust on an Airbus A320?
12
What are the "channels" on the A320 Rudder Travel Limit Unit?
8
Why can't we use APU bleed air for wing anti ice on the A320?
35
Why is it not recommended to hold the nose up on the A320 after touchdown?
0
Why did this A320 stall protection demo not hold Valpha max?
14
Can computer imposed inputs be overridden on the Boeing 737-MAX?
7
What is the trim wheel behavior on the A320 family?
4
On an A320, will the aircraft compensate for constant pilot rudder input?
5
Why do the A320’s primary flight controls have hydromechanical backups only for the rudder?