In the early days of flight, were there any cockpit control schemes other than the modern one?

Back in the early days, what kind of control schemes were invented for aircraft, other than the modern one? (pedals to yaw, yoke to pitch and roll).

I'm only interested in control schemes that can be done from the cockpit and control relatively small surfaces. So no weight-shifting, no wing-warping.

Hypothetical examples: 2 yokes (1 for each aileron and elevator), a steering wheel?, one-axis yokes?

The Dunne D.8 used a pair of levers, each controlling one elevon. 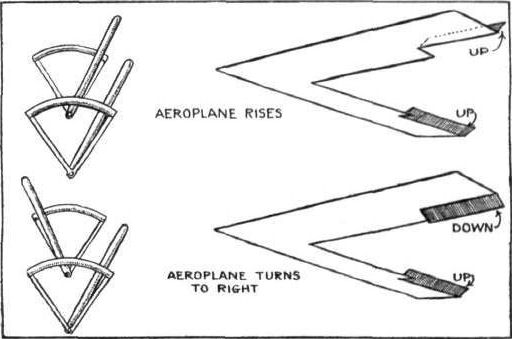 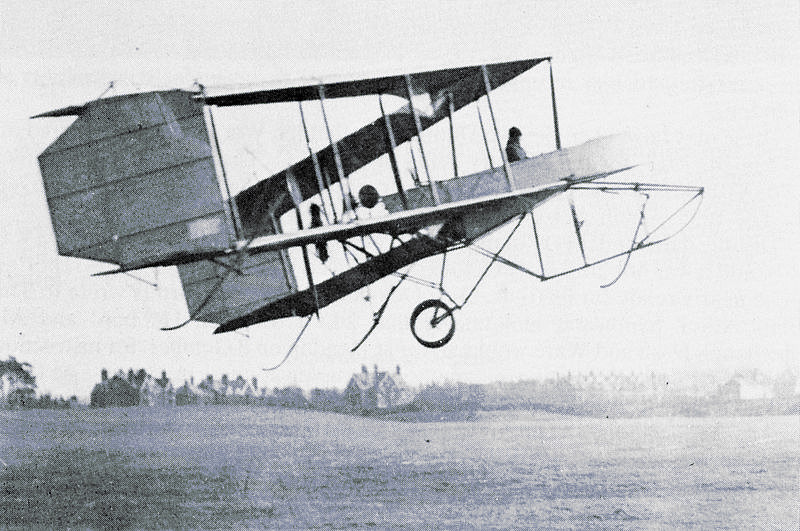 The early wright glider (1902) had its rudder connected to the wing warping system.

they connected the rudder control cables to the wing-warping hip cradle, so a single motion by the pilot operated both controls. They also changed the original double rudder to a single rudder, as shown here.

The wrights also used a hip cradle to move the wing warping system (early aileron system) as well as the cross connected rudder which I cant say exists any more.

The Wrights steered their 1903 Flyer with a hip cradle, which the pilot controlled by sliding his hips from side to side.

Similarly the elevator had a dedicated independent control.

This lever, operated by the pilot's left hand, was connected by a pulley system to the plane's elevator.

Early aircraft that sported a rotary engine, the style where the entire engine spins and the crank remains stationary generally had no effective throttle. Instead the throttle was controlled with a "blip switch" that grounded the magneto temporarily and cutting the engine out. This is far different than our modern throttle systems.

See the answers to this question r.e. steering wheels

The Wrights themselves experimented with a variety of frankly scary control arrangements after their elevator-lever-and-hip-cradle arrangement in the original Flyer.

The Flyer III had three levers: the lever on the pilot's outside right turned the rudder, the one to the inside right warped the wings, and the lever on the left controlled the elevator; the first Model A was also so equipped [1]. Wilbur found this difficult, blaming a crash in the Flyer III on it, and for the Model A they took to France he used two levers: the left hand controlled the elevator, while the right hand controlled wing-warping with a fore-and-aft motion, and the rudder with a lateral movement.

For a while, you could order a Model A with either 'Orville' or 'Wilbur' controls, though the 'Orville' system was modified to more resemble the 'Wilbur' system by creating a jointed lever, controlling the wing-warping by moving the whole assembly fore-and-aft, and rudder by moving the upper section laterally. This stick was placed between the seats, while an elevator lever was put to the left of the left seat and the right of the right seat - so if you switched seats, the handedness of the controls also switched (to be fair, that is also the case today with center-mounted throttles.)

There were undoubtedly other variants wherever experimental aircraft were built. In 1909, Baron Pierre de Caters was using a foot-operated rudder bar, and the invention of the conventional stick-and-rudder arrangement is generally credited to Esnault-Pelterie and first used by Bleriot.

Then there are helicopters: collective pitch, cyclic pitch, torque pedals, and throttle (this last often twist-grip).

Various near-space aircraft (X-15, NF104A...) were fitted with thrusters for attitude control at altitudes where aerodynamic controls are ineffective. In the case of the NF104A (an F104 with a rocket motor added), control was through a separate 'stick' [5]:

Shaped like a pump handle of a yard spray tank, the RCS controller was rotated in the desired roll direction, pushed left and right for corresponding yaw and raised to nose up for increased alpha or down to lower it. Any and all command combinations were possible.

The rate of rotation around an axis was a function of how long the thruster had been activated, and continued after the control was centered, giving a very different feel than aerodynamic controls. It was not anticipated that the shut-down jet engine would continue to spin for some time in the very thin air, and would cause gyroscopic precession when the aircraft was rotated in pitch and yaw. To add to these difficulties, the thruster controller had been miswired for the first high-altitude flight, which nevertheless was flown successfully.

The Wright Flyer used a simple wooden lever in the left hand to control the forward mounted elevator for pitch control. A sliding body cradle was used to transmit left and right body movements to simultaneously control both the wing warping for roll control, and the rudder for yaw control.

This was the first 3 axis control.

With the Wright Flyer III the roll and yaw controls became 2 separate control inputs and the flight controls quickly evolved into the conventional stick and rudder that is still in use today.

24
Why don't we have yokes that look like steering wheels?

24
Why don't we have yokes that look like steering wheels?
2
Why didn’t the space shuttle have flight control manual-reversion capability?
13
Why do aircraft have a crossover airspeed, and why does it increase at higher vertical load factors?
6
Why does the A320 use the rudder for lateral control in mechanical law?
16
Why not use the yoke to control yaw, as well as pitch and roll?
2
Did the Wright brothers discover the three-axis control system for airplanes/gliders and the adverse yaw?
5
Are there roll control devices other than ailerons?
9
Are 737 pilots required to train in manual-reversion flight?
15
How controllable is the 737 in single-engine manual-reversion flight? Is it controllably landable (or go-around-able) in this condition?
5
How are the 737’s elevator and aileron cables attached to their control tabs without impeding the control surfaces’ motion under hydraulic power?