What does it mean when ATC says “altitude indicates”?

Is there a specific reason for when they use one over the other?

air-traffic-control altitude phraseology
Share
Improve this question
edited May 31 '18 at 0:07

"Altitude indicates" means that the aircraft has a Mode C transponder but it isn't receiving radar service, i.e. it's VFR and not on flight following. In other words, the transponder is reporting an altitude, but because the aircraft isn't in contact with ATC, they can't be sure about its altimeter's integrity or the pilot's intentions.

There's 2 types of radar in ATC, there's Primary Radar which gives bearing and distance, but it can't give altitude, which is why there is Secondary Surveillance Radar (SSR) which interrogates airplane transponders. When a transponder is on and set to mode C or S the controller will see flight level on their screen. Flight level is altitude adjusted to standard pressure (1013hPa): 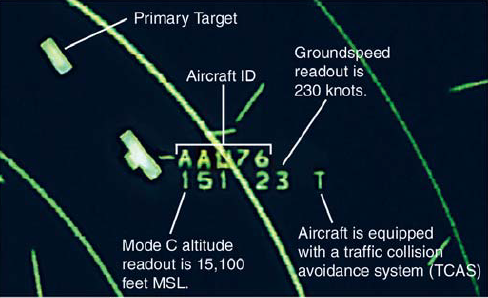 ATC is looking at the altitude reported by the aircraft's mode C transponder. They have to talk to that aircraft and verify that the altitude is correct before they can trust that information. This is part of "radar identifying" a target. If a target is not radar identified, they just say "altitude indicates."

Not the answer you're looking for? Browse other questions tagged air-traffic-control altitude phraseology or ask your own question.

19
What happens when I tell ATC to “mark the tape”?
14
What are the advantages, disadvantages and current state of affairs for text-based ATC?
10
When are ATC frequencies preset in the radios?
8
Why do ATC instructions to change level include the words “climb” or “descend”?
25
What does it mean when ATC says climb maintain 7000, block 8000?
6
Does ATC react to pilot position reports?
31
What does ATC do during “slow” times?
9
What does “Raven” [phonetic] means when used by ATC?
10
What is the exact meaning of “manoeuvring” when said by ATC in reference to traffic?