How does the wraparound wing design reduce drag?

How does the wraparound wing in this AOPA article reduce drag? One would think all that extra leading edge and surface area would make it worse. One more link also. 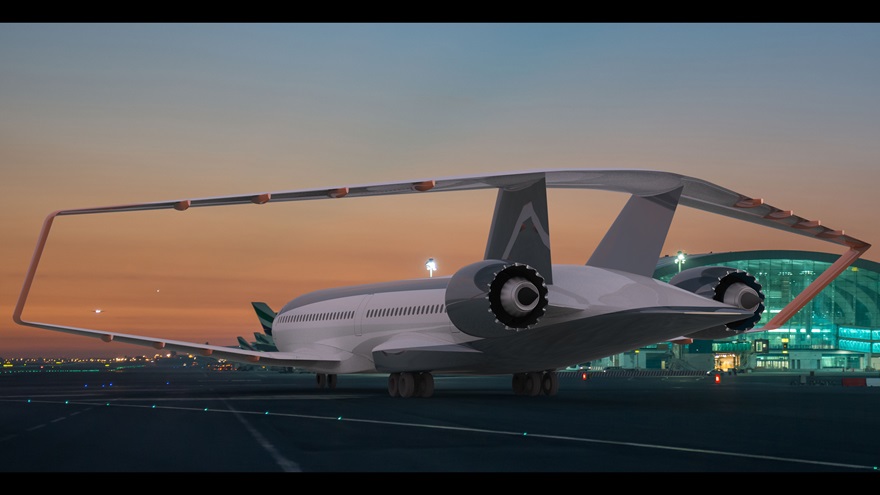 The Parsifal Project has produced a proposed design dubbed PrandtlPlane, an homage to Ludwig Prandtl who developed an idea for an airplane wing that boosted efficiency (and reduced drag) by wrapping around on itself to form a box around the fuselage.

This paper on Conceptual Design of High Subsonic Prandtl Planes

is also proving to be most interesting reading

It does not reduce drag, but creates more of it.

This concept is called a "box wing" and is one variety of closed wings. Another is called a "joined wing" and was popularized by Julian Wolkovitch. However, only people who don't understand how a wing produces lift can be enticed by this concept - it has too many drawbacks for the modest reduction in induced drag it offers. The general idea is to sweep the horizontal surface of a T-tail forward and stretch it out until it joins the backward-swept wing and relieves it in bending, similar to a strut.

Similar to winglets, the vertical extension of the wing structure will involve more air into the production of lift, which reduces induced drag, but this extended structure must be bought with a hefty mass increase which will reverse the gain in induced drag, because much more lift needs to be produced in order to lift the additional structure.

Note especially that the rear wing (which is supposed to act as a tail surface) will be loaded in compression in order to support the wing. Making this rear wing narrow will make it susceptible to buckling, which can only be avoided by a stiff and heavy structure, and will increase its friction drag due to its much lower Reynolds number. When a winglet-like element is added between wing and horizontal tail, this winglet is now loaded in bending and will also need to be made much stronger and heavier than a conventional winglet.

Calling this a "Prandtl plane" is to completely misunderstand the 1924 publication of Ludwig Prandtl, who very well understood how wings create lift, about the benefit of box wings.

It behaves like a wing with a higher effective aspect ratio, thanks to the wingtips going full circle, while fitting into smaller overall dimensional restrictions. This wing can also be thin without suffering as much structural weight penalty as a normal wing would thanks to the bracing effect of its box shape (but there needs to be more angle between the wings than in the picture to get significant structural improvement).

The price for that is that is still adding weight and becoming a tandem wing with possible interference between upper and lower surfaces. Is it better overall? It appears that the general case is no, but it most likely has its niches where it's better.

There's been a related question: Do box-wings suffer from induced drag the same way as normal wings? - that has a lot more detailed information in the answers. Be sure to check it.

Bottom line, it's a tandem wing with a little fin joining the tips. Basically a variation of this contraption, which does fly, more or less.

Truth is, there isn't a hell of a lot under the sun in aviation that wasn't already thought up by the 30s.

Not the answer you're looking for? Browse other questions tagged aircraft-design aerodynamics wing airframe or ask your own question.

19
Do box-wings suffer from induced drag the same way as normal wings?
0
Is there any advantage to having both wings integrated into a single wing unit, rather than being attached separately to the fuselage?
0
Could box-wing aircraft be the plane of the future

19
How does chord length affect wing design?
53
What's the advantage of the F4U Corsair's gull wing design?
4
How can I calculate the drag coefficient for a given wing design?
8
Why does the elliptical wing have the lowest drag?
11
How does hovering in ground effect (IGE) reduce drag?
3
How does wing flex reduce wave drag?
2
How do endplates reduce induced drag?
1
How does wing aspect ratio influence lift and drag?
3
How is wing area defined?