Is it possible to fly 'in neutral'?

Sometimes, when I am driving, I knock the car 'out of gear' or set the stick to the neutral position, to save fuel. This is most easily done when cruising down a hill or when you have some good speed and are approaching a stopping point, i.e an intersection.

Much like how a gas pedal controls the fuel input of a car's engine, so do the thrust levers on jet-liners. The coasting equivalent is idle thrust. The engine keeps running, but with minimal fuel flow.

The minimum fuel flow is not fixed as it is a function of altitude, airspeed, and temperature. Nowadays it is typically managed by the FADEC, so the pilot (or auto flight system) can pull the levers all the way to idle and not risk flaming out.

Idle thrust in this answer refers to that minimum thrust setting that would not cause a flame-out.

An ideal descent (and its planning) does just that. Descend from cruise all the way to lining up with the runway using idle thrust.

Hitting unexpected headwind, or being asked to slow the rate of descent, would require higher than idle thrust. In the car/slope analogy, that would be the equivalent of changing the slope to a shallower one (planes, unlike cars, need a minimum forward speed).

Most jet engines also supply air for air conditioning and pressurization – it's called bleed air. On a plane like the Concorde that cruised at almost double the altitude of the common jet-liner where the air is even thinner, idling at 55,000 feet or so was not an option because of the impact it would have on the pressurization. The engines needed to run at higher than idle to provide this bleed air. 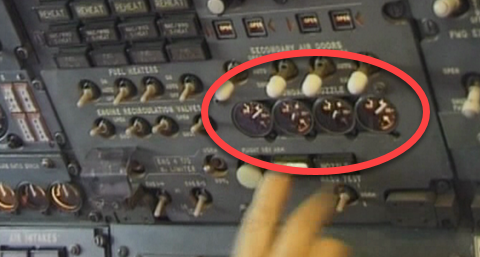 If the Concorde flight crew wanted to increase the rate of descent, they were allowed to deploy the reversers of the inboard engines (#2 and #3) in-flight – this was done from the flight engineer's panel (shown above). This way the thrust is redirected, but the engines keep running at the required RPM for this bleed air. (According to the Type Certificate, this was limited to 4 minutes. That's about 8,000–12,000 feet of descent.)

Reducing thrust is the normal way to descend, though given that the prop is bolted to the crankshaft, you don't really have a neutral*. It's exactly the same as taking your foot off the gas pedal in a car. Depending on conditions, you may or may not want to go all the way to idle until you're actually on the runway, thought.

You can use other techniques to increase the rate of descent, such as slipping or deploying spoilers if your plane has them (most common on sailplanes), which would be equivalent to using the brakes on your car.

*As others have alluded to, shifting to neutral isn't the most fuel-efficient way to decelerate in a modern car. Most if not all have what's called Deceleration Fuel Cutoff (DFCO), which shuts off fuel completely when decelerating in gear. In neutral, the engine uses a small amount of fuel to idle. Given that most airplane engines are '50s tech, this doesn't really apply to them, though.

To actually reduce engine thrust to zero would require in-flight shutdown of all engines. As already discussed, this isn't done for a variety of reasons; one such reason is the use of bleed air, and another is that starting the engines is a multi-step process that can take some time even without the complexities of starting an engine that is windmilling rather than at a standstill, and a third is that engines provide more than thrust (such as hydraulic pressure or electricity for non-critical but still useful systems, including additional radios). Shutting down all engines in flight is something you really don't want to do, because doing so deprives the pilot of options; for example, it makes a go-around or even just handling an unexpected gust of wind far more involved than it needs to be.

What is often done, however, is to reduce thrust to idle. Idle thrust does not mean zero thrust; idle thrust generally means some low amount of thrust above the minimum required to keep the engine safely running (which itself is typically non-zero). Because the engines are still running, it's a relatively simple process to increase thrust if needed, which means that unexpected events during the descent can be dealt with much more rapidly and safely.

There are other ways to descend. The pilot could simply point the nose towards the ground and leave the engines where they are (assuming no autothrottle or similar system), but that will cause speed to increase. In light motor aircraft, it's probably pretty common to compensate for this by simply reducing engine thrust along with pitching the aircraft down, unless you actually want to descend under power.

Another option, which is probably more common on large aircraft, is to deploy high-drag devices such as spoilers or air brakes without a corresponding increase in engine thrust.

Remember that the aircraft can be treated as an energy system with fuel burn (controlled by the thrust levers) providing energy input, lift helping keep the aircraft in the air, and gravity and drag costing energy (in different directions; typically downward and forward, respectively). If you increase drag, for example by deploying high-drag devices, then basically one of two things will happen: (1) the drag of the aircraft increases (duh) which means that if you were previously in an equilibrium, you are now "spending" more energy than you have available, causing either a descent, a reduction of airspeed, or both; or (2) you will need to increase thrust to compensate for the increased drag to maintain speed and altitude. (#2, by the way, is why the landing gear is retracted early during the climb-out; doing so reduces drag, leaving you with more power for climb.)

An effect of #1 is that you can control the pitch of the aircraft to choose how much the speed changes, and how much the altitude changes. (Airspeed and vertical speed, respectively.) The pilot (or autopilot) can simply pitch the aircraft to maintain a desired airspeed and let the vertical speed become what it may, or they can target a vertical speed by pitching for that and simply monitoring the airspeed to make sure they aren't overstressing the airframe on the high side, or approach the stall speed for the current configuration on the low side.

All in all, airplane pilots have lots more options than car drivers (and the above doesn't try to provide an exhaustive list), but something exactly resembling "neutral" in a car isn't one of them.

Reducing power is indeed a means of initiating a descent, and a pilot may reduce the thrust to idle if they choose to. You will notice this on most commercial flights; as they are nearing their destination the engines will go quieter (as the thrust is reduced) and the aircraft will descend from their cruise altitude.

However, most pilots will not routinely do a glide approach and landing. Most commercial airports will have a specific angle of approach (rate of descent between a given point and the runway) that inbound aircraft will need to use. Power is used and adjusted to maintain the correct rate of descent - if the aircraft is descending too quickly, power is added, if not quickly enough then power is reduced (to idle if necessary). Again, you may notice this on approach in a commercial flight, particularly on a turbulent day - you will hear the engines spool up and down as the pilot adjusts the rate of descent.

There are exceptions. Glider pilots will naturally always do a glide approach as they have no engine. They control their rate of descent through the use of airbrakes or spoilers, which increase drag (air resistance), so they must descend more quickly to keep flying at the same airspeed. Some other light aircraft pilots may also prefer a glide descent and landing where possible.

Pilots of all types will often practice glide approach and landings so they are ready to handle an engine failure. Famous examples of engine-out landings include the Gimli Glider and more recently the landing in the Hudson.

Jet aircraft only have a thrust lever to set the power level. Even at idle most engines will still be producing some forward thrust. If shut down, the engine will produce drag.

Fixed-pitch propellers run at the same speed as the engine, so as with jet engines you can only adjust the engine throttle, and it will either be producing thrust or causing drag. Small aircraft use this because it is a simple setup.

Constant-speed propellers are able to adjust the pitch of the propeller blades, called feathering. This would be closest to having "neutral" as in a car, as you can adjust the prop speed (which follows engine speed and affects thrust) independently of the engine power. However, these aircraft typically have limited ranges of propeller RPM where they are intended to operate. These propellers can also use their pitch change to provide reverse thrust to slow the airplane down, primarily on landing. Some can do this in the air, which is more like downshifting in a car. When an engine fails, the propeller is feathered so that it provides the least amount of drag.

If the car is in neutral and you don't want to slow down, you have to be going down a hill with just the right slope to maintain the speed you are at. If you do it on level ground, the car will slow down. Airplanes are the same from a conservation of energy standpoint, but the pilot gets to choose the slope of the hill, as well as the speed.

One of the old-timers at my gliding club told me about a flight he took along the Blue Ridge Mountains, where the controller gave him a vector that was a few miles away from some strong mountain wave lift. He kept veering into the lift to increase his ground speed, and the controller would remind him that he was off-course. After a few iterations of this, the controller gave up and granted him an amended vector where he could fly in the lift at significantly increased ground speed and reduced fuel burn.

IIRC, his scheduled 4-hour flight was reduced to slightly more than 3 hours.

41
Why would a glider have water ballast? If it is trying to stay aloft without an engine, wouldn't it be better to be as light as possible?
12
What is the most 'environmentally friendly' way to learn to fly?
4
How much does it cost extra to fly with one additional passenger?
8
Is it possible for a plane to be over fueled (and over-weight) to take off?
2
Other than fighters, which airplanes can fly straight up?
2
How far could a KC-10 tanker fly if it consumed all of its internal fuel tanks?