What was the first aircraft that could fly inverted?

I'm taking a guess and assuming the Wright Flyer was incapable of flying upside down. I'm just guessing it probably lacked the power... ;)

So what was the first plane that could fly inverted for a sustained period of time (10sec+) with full power? I'm assuming you would need an engine that was okay being upside down*, and had the power to get you high enough to make the maneuver safe. Then you'd need an airfoil that worked inverted (some of the high early cambered wings may have had problems, for example) and controls that functioned in that environment as well. Probably a seat belt would be useful too.

Anybody know what plane was the first one to have all of these, and then went ahead and flew upside down?

Bonus points: I also wouldn't mind knowing what plane was the first to simply fly inverted, even if for a brief moment...

*As Jan Hudec pointed out, the engine itself doesn't really care, but the fuel system might. So really we should be asking when the first fuel system that could go upside down was produced...

The answer is probably indeed A. Pegoud with a Bleriot monoplane in the fall of 1913, as answered by RedGrittyBrick. After that, a real craze started in Europe with stunt pilots flying briefly inverted at air shows.

The first purpose-designed airplane for inverted flight was probably a Grade monoplane which flew first in the spring of 1914. I have found this picture 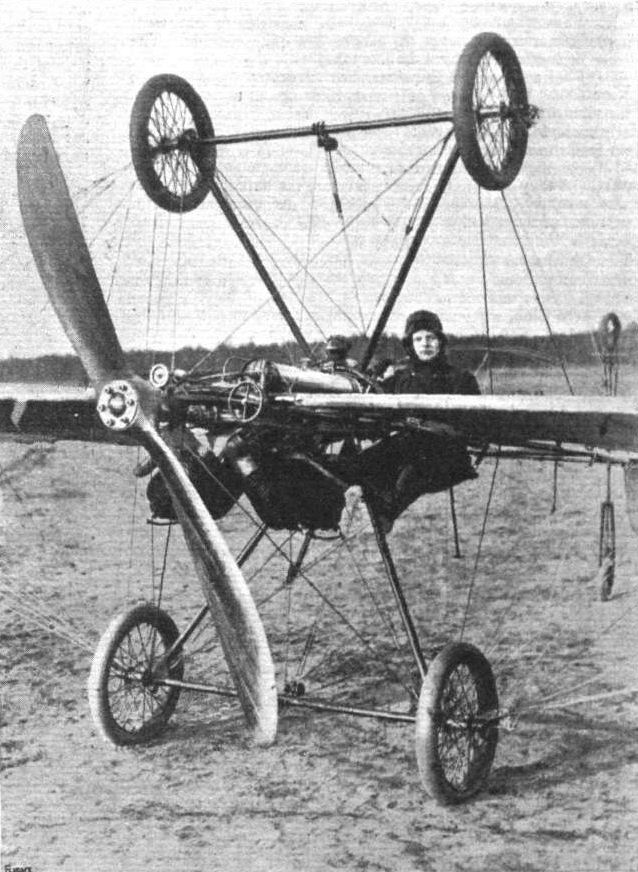 on a Russian web page which lists lots of photos from early issues of Flight magazine. You have to scroll down 80% to find it. It gives the name as "Tweer monoplane", but it was actually built by the Grade aircraft factory right after the inverted flying craze was started by Pegoud. Gustav Tweer was an aerobatics pilot (one of many at this time), who was famous for diving his airplane almost into the ground at flight shows.

This airplane was designed for inverted landings, and with the uncambered wing I would expect that also the fuel system was adapted for inverted flight, however, there is no mention of that anywhere I have searched.

The first reported deliberately inverted flight was probably in a Blériot model XI. 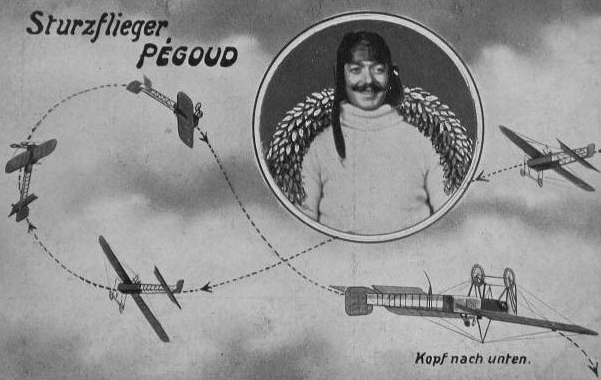 Inverted flight was also being considered. Several pilots had inadvertently found themselves upside down as a result of wind gusts, but no one had yet attempted it intentionally. Adolphe Pegoud decided he would be the one to try.

Pegoud was one of the first true aerobatic pilots. An accomplished test pilot with the Bleriot team, he was also the first flyer to jump from a plane with a parachute. Both Pegoud and the aircraft landed, unharmed. Having decided to try upside-down flying, Pegoud first practiced in a hanger [sic] in a plane hung upside down from the ceiling. He correctly assumed the controls would have to be operated in a reverse manner and he wanted to get the feel of it before actually flying.

It must have worked. Shortly thereafter, Pegoud made the first public demonstration of inverted flight in September of 1913. During this flight, he was the first to perform a half roll to an inverted position--another aerobatic maneuver was born. The flight did point out one potential problem: While Pegoud was prepared to fly inverted, the aircraft was not. It proceeded to drench the flyer with fuel!

From The history of aerobatics

June 1925, No 32 Squadron did an air display demonstrating Flight-converging bombing at the R.A.F Display, Hendon. Scott was selected to do individual aerobatics in a brand-new Snipe which he was allowed to paint red, this pleased Scott greatly as it meant that he was also allowed to practice his aerobatics at a low altitude, rather than above 2000 feet which was R.A.F regulations at that time. In Scott's book he tells of how for his solo display he was allotted exactly seven minutes during the luncheon break, to complete his show but after just two minutes, a flying wire broke in the near edge of the port side, anxious not to cut his allotted seven minutes down too much he began to fly the aircraft upside down in an effort to reduce the strain on the flying wires, he continued flying in an inverted position for some time until he noticed a worrying quiver in the top plane and promptly landed slightly short of his seven minutes. 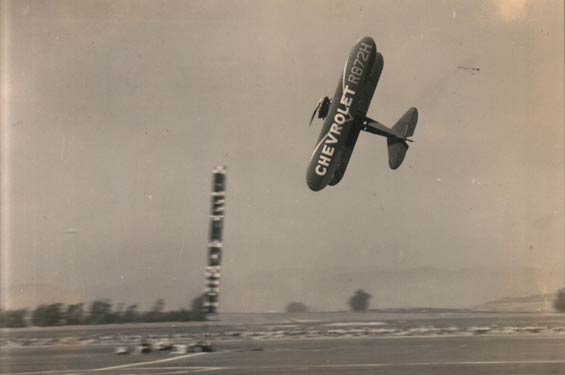 After its career with Pratt & Whitney, the Museum of Flight's aircraft was sold to Milo Burcham on September 27, 1933. He modified it for skywriting and air-show work, painted it blood red, added fuel and oil systems for inverted flight, and flew it upside down from Los Angeles to San Diego.

From Seattle Museum of Flight

Not the answer you're looking for? Browse other questions tagged aircraft-design flight-controls piston-engine wing aviation-history or ask your own question.

10
How is rudder used in a aileron roll?
0
What is the first recorded instance of simulating weightlessness in an airplane?

24
Why is the wrong explanation of “air travels a longer distance and creates a lift” so popular?
46
Why is the Tu-95 so efficient despite having propellers that spin faster than the speed of sound?
12
What was the first plane that allowed walking during flight?
8
What was the first jet-powered supersonic aircraft?
25
Which aircraft have made notable use of lateral asymmetry?
1
When was the first picture of the Wright brothers' 1903 plane published?
1
Why did the Wright brothers take steps to increase the amount of vertical surface area forward of the CG on some of their aircraft?
11
Is it possible for a plane to accelerate easily from 30 to 45 mph in flight while it struggles to reach 30 mph (the engine runs at constant power)?