A major part of why the Concorde was far less of a hit than predicted, and of why the many 1980s and 1990s supersonic transport projects never got off the drawing board, was that the FAA had banned all commercial supersonic flights over the United States in 1973 (two years after the original U.S. SST effort collapsed) due to concern over sonic booms, locking SSTs out of the lucrative U.S. transcontinental routes.

The short answer is a bad PR fallout following the Oklahoma City sonic boom tests, even though the tests were generally positive.

[The National Opinion Research Center] reported that 73% of subjects in the study said that they could live indefinitely with eight sonic booms per day.

The FAA's poor handling of claims and its payout of only $123,000 led to a class action lawsuit against the U.S. government. On March 8, 1969, the government lost its appeal. The negative publicity associated with the tests partially influenced the 1971 cancellation of the Boeing 2707 project and led to the United States' complete withdrawal from SST design.

The tested 96 Pa (2 psf) overpressure -- what an SST produces and is far lower than military jets -- according to concordesst.com is:

(...) equivalent to the pressure one would feel when putting a hand out of the window of a car travelling at 30mph.

A 1973 article by The New York Times, "Supersonic Civilian Flights Over U.S. Are Outlawed", does not give reasons, only that it was expected.

The rule had been expected for three years, since the F.A.A. first proposed it in April, 1970, in a notice inviting comment for or against the action.

Accordingly, it came as no surprise to manufacturers of supersonic transport planes such as the British‐French Concorde and the Soviet TU‐144.

Congress canceled the Boeing‐General Electric program for an American SST twe years ago, for budgetary reasons.

The New York Times also reported in 1970 about the supersonic trials over populated areas in "West Scotland, Wales and England" with no reports of any damage.

Was it politically motivated? Were there really no solutions such as the proposed corridors? Those and @CptReynolds' commentary that [the US] banned it to "prevent a European aircraft from capturing 100% [of the SST] market share with US airlines" are worthy of posts on Skeptics or Politics.SE. Over there they'd know where to dig deeper.

One of the things I found for example was a ban on Concorde before it set a tire in New York. So it was a ban that came before any evaluation for its subsonic noise. The Supreme Court eventually intervened and lifted the ban (The New York Times, 1977).

Another find was a quotation from Ohio Senator Clarence J Brown, saying:

I see no reason to oppose the SST [meaning Concorde] just because we were stupid enough to get out of the SST business ourselves (concordesst.com).

When you want to know why the FAA or any other US government agency created a rule, the answer will be found in the Notice of Proposed Rule Making (NPRM) that is required to published prior to implementation of a new rule (with limited exceptions for emergency rules). All NPRM are published in the Federal Register, after which there is a period for public comment. After that, if it is implemented, there will be another notice in the Federal Register that summarizes the proposed rule, addresses the public comment and provides the final rule and the date of effectiveness.

In this case, we can go to the Federal Register for April 16, 1970 and on page 6189, we have the NPRM. As the online document is an image scan and the full NPRM is about 2 pages long, I've included the following relevant image clips: 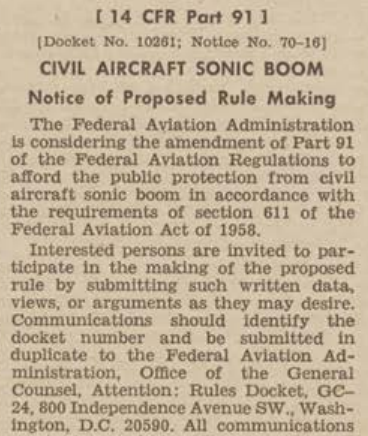 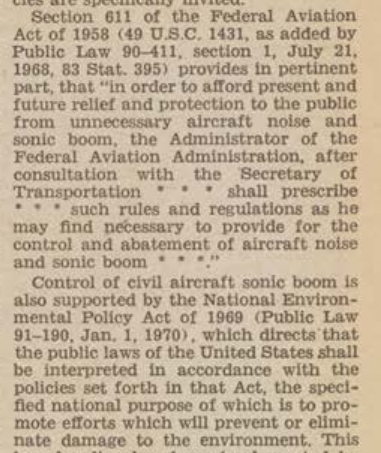 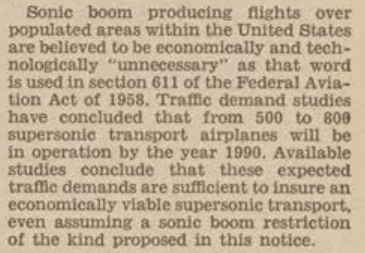 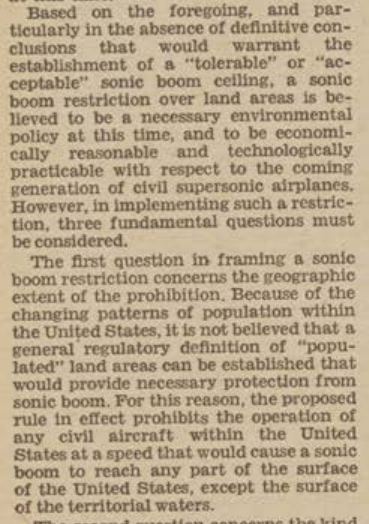 You can review the full NPRM at the link above. The final amendment, Amdt. 91-112, was published in the Federal Register on March 28, 1973 page 8051, and includes responses to the public comments received.

Direct answer – Some weather patterns can cause some booms to be heard tens of miles away and urban and suburban growth was quickly extending into formerly rural areas, so the theoretical corridors weren't going to be practical. Background – I lived in both rural and urban areas during the years while supersonic flight was allowed. While the noise did not much bother me at my young age, sonic booms woke sleeping babies and night-workers (you really want a dead-asleep doctor trying to save your life?), scared toddlers, animals, and some people, broke windows (many tract homes in those days had thin walls and windows), interrupted all sorts of people in focused activity (try to focus swinging a bat at a ball while being hit on the head or working on finances), and startled about everyone. Concorde – None of this affected the Concorde, as its purpose was to fly between Paris and New York City. The Concorde passed into engineering history because (1) the long term economics lacked enough people with desire and money to make the Concorde a viable business, and (2) sonic speeds vibrations and drag and heat-expansion are much more severe than at subsonic speeds, and complicated design and maintenance beyond a profitable price-point. Shame, as it’s a beautiful aircraft.

Because people living in rural areas don’t like having loud, noxious sonic booms damaging their property and aggravating them at all hours of the day while these flight tiptoe around urban airspace and don’t annoy city dwellers. And they vote and have representation in Congress.

Not the answer you're looking for? Browse other questions tagged faa-regulations supersonic concorde sonic-boom or ask your own question.

7
Could Mach 1.4 be a better design point for SST?
4
What were the effects of the oil crises on the Concorde ticket prices?

11
Why are there 40 737 Max planes in flight when they have been grounded as not airworthy?
6
What safety issues led the FAA to ban Constellation flights into/out of the U.S.?