How does the nozzle diameter affect the thrust of a ducted propeller?

I currently do some experiments with ducted propellers in which I try to figure out which effect a nozzle has on the thrust produced. My theory goes like this: If I reduce the exit diameter of the duct the pressure is going to decrease and the air velocity and thus the thrust is going to increase. Consequently, you would want a small exit diameter.

However, in my experiments I measured the thrust of a 12x12 inch propeller at around 5500 rpm and got 20 N without a nozzle (just a constant diameter duct) and only 4 N with a nozzle reducing the exit diameter to 50 percent of the prop diameter.

These results are contrary to my theory! Does anybody have an explanation for this ? And what should I change to actually increase the thrust compared to the prop without a nozzle ?

Here are some pictures: 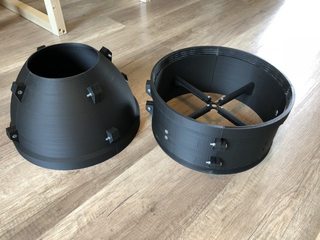 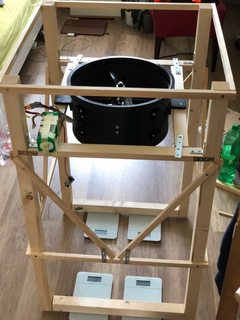 Welcome. I'm afraid your theory wasn't actually working. Reducing the duct's exit diameter led to an increase in its internal pressure, increasing load on the propeller, and likely even causing some reverse flow.

Nozzle design is a complex subject. I can't think of a way to condense it, even limited to one specific case, into a suitable answer; maybe I don't get it enough myself. Keep that in mind; the below is just one small shard of the whole and by no means the full picture.

In general, the job of a nozzle is to match the pressure at jet engine exit to that outside it. If the pressure is different, it gets matched outside the engine, where it doesn't produce thrust.

It's important for a convergent nozzle not to compress the exhaust to a higher pressure than the outside air, else it will destroy thrust. That was your case, the nozzle was too narrow, so it compressed the air to above ambient - which caused it to try and blow back through the fan.

To give a practical answer, an optimal nozzle at these velocities would be very similar to a simple duct, narrowing just a percent or two at the end, with a smooth exit shape.

To add to @Therac's answer, you will probably add some drag on the outside of the nozzle by contracting it. The air flowing around it will separate if the contraction angle is too steep.

This subject is one that the helicopter people have given a lot of thought. From this figure from Leishman we can see that the wake contracts by itself already. 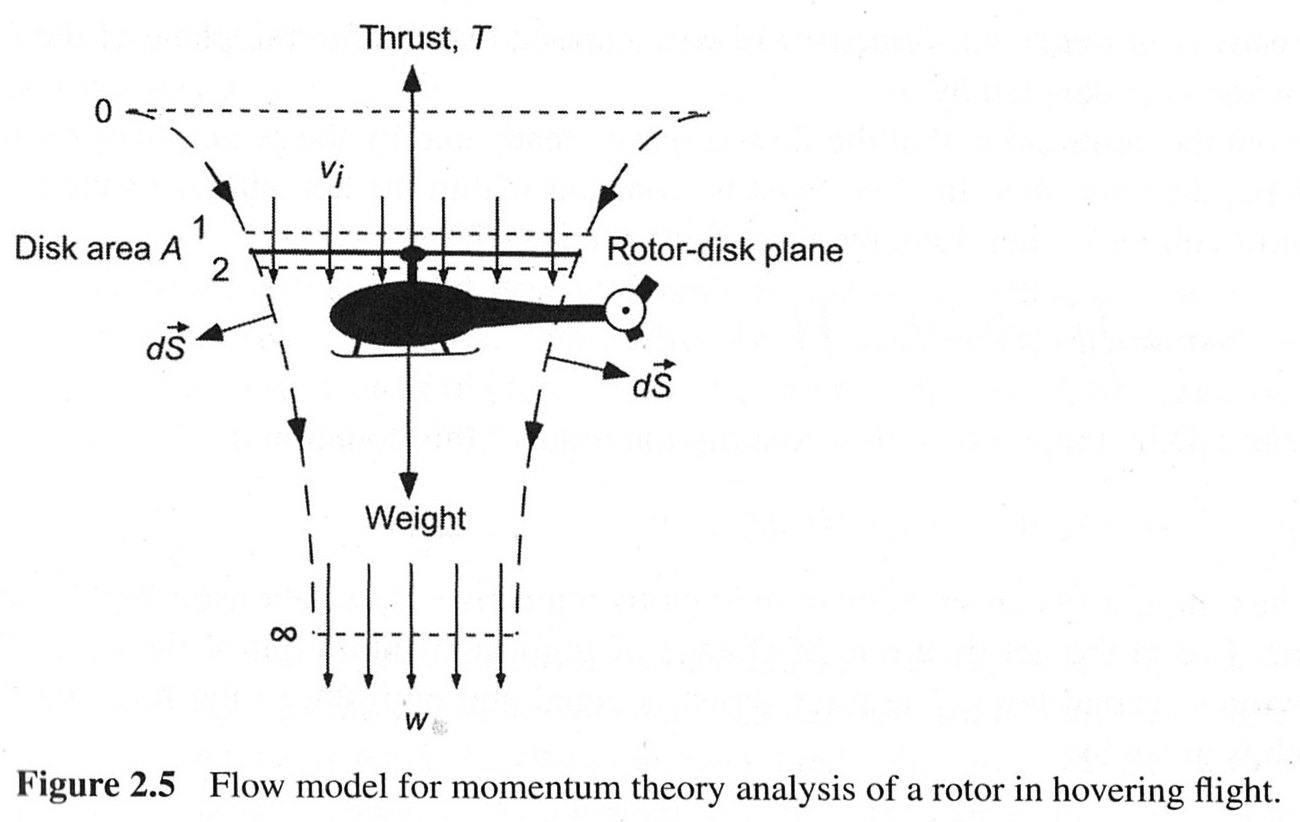 The contracting shroud in your test setup has higher pressure just behind the propellor than at the shroud exhaust. This static pressure gradient exerts a force on the shroud area, resulting in negative thrust. Plus friction forces from the airstream in the duct.

The same book has a bit of a treatise on tail rotor fan-in-fin design based on momentum theory, which actually depicts a widening shape. More details in the masters thesis report, mentioned in this answer. 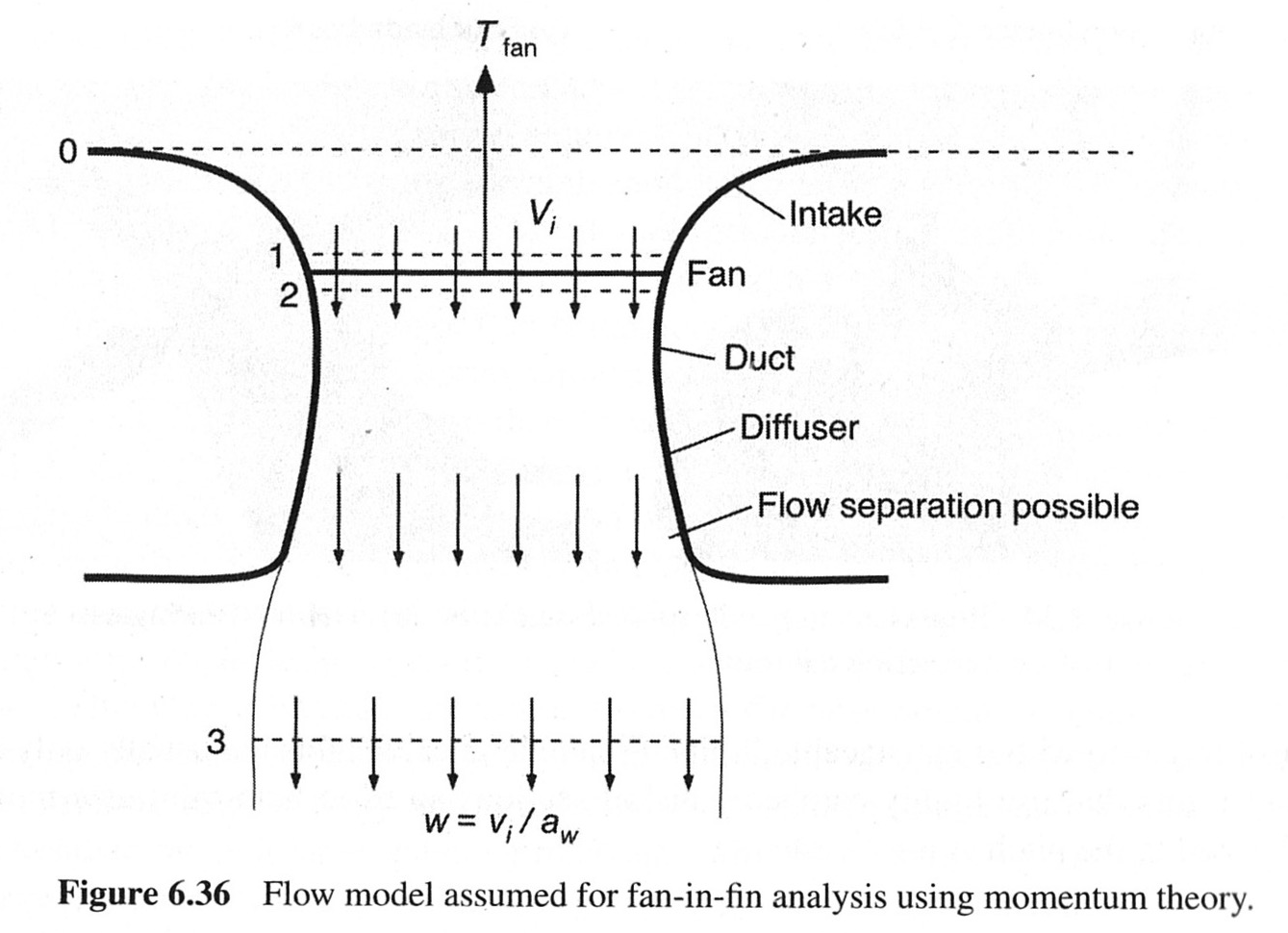 You increased the airspeed but reduced the airflow.

This is great work, and you are off to a good start. You may wish to review jet engine design. What you are building seems to be the compressor half. Narrowing the "exhaust end" will increase pressure in the duct, which is what you want a compressor to do. Forward motion created when applied to an aircraft will add to this affect. This could be an air "scoop" for a piston engine!

The best way to test your designs might be full throttle in level flight, as this would also give you nacelle drag data. Top speed comparisons will probably show by far a properly pitched prop with no duct will win the power to thrust efficiency test, but not without much being learned.

Ducted fans look great on scale model designs, but generally drain the batteries much faster than props. They do have advantages at very low or hovering speeds, but props take over from around 50 to around 400 mph.

I would definitely continue this work for application of boosting power in piston engines. Sports cars have air scoops on their hoods, this one might be better.

Not the answer you're looking for? Browse other questions tagged aerodynamics jet-engine engine propulsion or ask your own question.

15
What is the propeller efficiency, $μ_p$, of modern propellers for light sport aircraft?
2
Will creating a strong back pressure within a ducted propeller enable an aircraft to attain a higher altitude?
1
What would be the best fan duct design to achieve maximum thrust?

1
What is the diameter of the nozzle of Trent 1000?
1
How is a propeller diameter for given application determined?
6
How does the line of thrust affect longitudinal stability?
2
How much the Concorde secondary nozzle contribute to thrust?
2
Would plain and slotted flaps increase lift substantially in a distributed propulsion application?
0
Can thrust be produced only using the forward speed of a nozzle?
2
Are shrouds and stators needed to maximize thrust from stacked props and motors in electric aircraft like the Lilium Jet?