Do ballonets control the buoyancy of a Zeppelin NT?

Ballonets are bags of air inside the lifting body of the airship.

I have read about Zeppelin NT, a semi rigid helium filled airship. It uses ballonets to maintain constant over-pressure inside the aerostat. I can't see how this airship would use ballonets to ascend/descend. However it has swiveling engines and actually takes off heavier than air.

I have read that ballonets were also used to control altitude of an airship. However I can't see how it could work since air is neutrally buoyant in air. Maybe in older airships the air in the ballonets was slightly pressurized to make them heavier. Maybe on the landing hydrogen was released and ballonets were filled with air to maintain constant pressure.

The NT, being semi rigid, does not work like a balloon where buoyancy of the airship is controlled by adding or releasing helium. The quantity of helium carried is set at the beginning of the flight, and is set so that the aircraft is heavier than air. Vertical motion is then controlled by engine power. Buoyancy control is not the ballonet's purpose.

Ballonets are used to maintain constant pressure in the hull, as this is required for structural integrity. Whatever additional volume is required beyond that consumed by the helium carried is filled by air pumped into the ballonets. This air may also be released to control pressure as the craft ascends, and pumped back in as the craft descends. The hull is not designed to be pressurized beyond 5mbar.

Envelope - Non-flammable Helium, contained in a high strength, multi-layered laminate, provides the necessary lift. The envelope pressure is maintained at only 5mbar above atmospheric. Air chambers, the so-called “Ballonets” help to keep a constant interior pressure at all flight altitudes, and maintain a rigid hull.

It's one of the ways it can control altitude. Ballonets work quite well, including in modern airships.

What they do is allow the helium inside the airship to take less than its full volume, by taking up the rest of the airship's volume with air. Buoyancy comes from space where you don't have air, and displacing helium with air reduces that space.

Ascending requires having more helium volume, descending less helium volume. Since the same amount of helium takes more volume at high altitude (less pressure), it works out without a need to vent it.

For an easy analogy, take a submarine. It can float because it's filled with air. Replace some of that air with water - fill the ballast tank - and it sinks. In an airship, outside air acts like water. Water is neutrally buoyant in water, but it reduces the space filled with positively buoyant air.

Think of the ballonets as ballast tanks. The only difference is that helium isn't discarded, since it's difficult to replace. Expanding the ballonets compresses the helium a bit, but just for a moment, the airship then sinks to where outside pressure is higher, restoring the equilibrium. That small temporary pressure change is easily exerted with blowers.

Alternately, after altitude is changed aerodynamically in forward flight or with propellers, the ballonets need to be expanded or reduced in size to match the new external pressure.

In the picture below, see how the volume of the airship is part helium and part air: 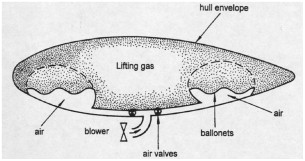 Not the answer you're looking for? Browse other questions tagged airship or ask your own question.

22
How do blimps control altitude?
1
What gas is used in airships to give them buoyancy?
5
What is the difference between an aeroscraft and an airship?
7
What was the mass of the Hindenburg?
5
Why does the zeppelin NT tail use 3 fins?
6
When an airship climbs the hydrogen in the ship's cells expand. Does this mean that when the airship descends the empty cells fill with air?
3
During WW1 Zeppelins began their missions with Hydrogen cells at 33% full. How did this provide enough lift to get off the ground?
6
Would atmosphere floating inside an airship be counted towards the mass of the airship?
4
Would the solid material inside an airship displace air and be counted towards lift?