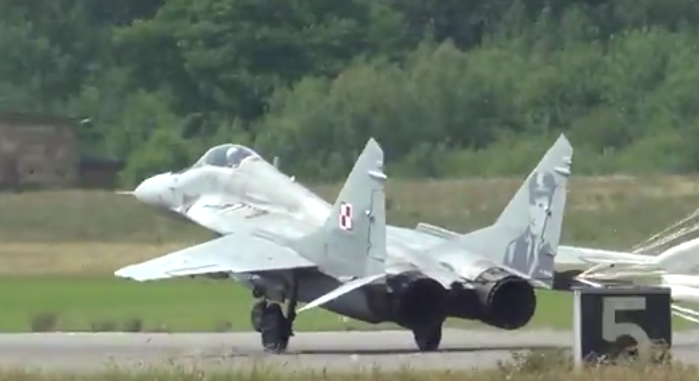 In the frame above the pilot is pulling back, as evident by the stabilator's position, and this technique is usually cited as a means of slowing down.

But wouldn't the brakes have better effect if the struts are fully compressed as with jet-liners? What makes aerodynamic braking effective for jet-fighters then?

Presumably that fighter pilot is applying some brakes at least (otherwise they wouldn't have added a drogue chute).

My thinking is, if the nose gear was planted, the same braking force will have a better effect (reduced lift), even without spoilers present since the jet engines won't be contributing to the struts decompression. Also the nose tire will add to the rolling friction.

The aero brake in this picture is the chute! and yes, it works!

Your wiki source is mistaken in stating that this use of elevator increases load on the main gear. The wing angle of attack will increase wing lift in multiples of the tail download, as you observe in the extended gear struts.

Landing like this allows the aircraft to slow with less use of brakes. It is counter-intuitive to claim to both save brakes and increase main gear load, which is intended to allow greater use of brakes.

Military jets land at comparatively high speeds, making this more useful since aero drag is proportional to speed squared. It may even be more effective at high speed than brakes, saving brake capacity for later in the landing when aero braking becomes less effective. Brake capacity may be limited to keep brakes small and light.

Nose gear does not have brakes and adds negligible friction.

Actually one can simply apply braking pressure to slow a fighter down. One problem, especially so with early jet fighters, was that they often had very small tires and brakes on the main gear which were inadequate to slow the airplane from touchdown speed to a standstill in a short distance. A good example was the Northrop T-38, which could takeoff in less than 3000 feet of runway but needed over 7000 feet to land on due to the small brakes.

Modern fighter do use aerodynamic braking at airports with long runways, in general to reduce wear and tear on the brakes. Touching down at 160 kts, thence maintaining elevator pressure to hold a 10° or so AoA until the jet’s speed bleeds down to 100 kts or so reduces the jet’s energy state to nearly a quarter of what it was when it touched down, leaving far less work for the brakes to do.

Not the answer you're looking for? Browse other questions tagged pilot-technique braking or ask your own question.

33
Why pull up on the rollout after landing, after the nose wheel is down?
3
Why is V1 based only on using brakes?
2
How to reduce the landing roll distance
3
Is a braking rotation immediately after touching down a known maneuver?

14
What is differential braking?
12
What are the relative braking contributions from wheel brakes, spoilers and thrust reversers?
3
What is typical thrust to braking force ratio for a passenger airliner?
5
Does the weather condition of the runway affect the braking of an aircraft with regards to wheel braking and reverse thrust?
8
Does the 747-8 / A380 nose-wheel encounter more weight during braking?
22
Would increasing the number of wheels of a Jumbo reduce the braking distance?
3
What guidance is there for pilots when reporting braking action?
12
Why is braking action (with Anti-Skid) best when the wheel rotates at ~85% of the actual speed?
1
What is the 'fuel cost' of a pneumatic braking system vs. a hydraulic one, in terms of weight?
2
How does pulling back provide better steering during rollout for light GA planes?