What was the value proposition of the 767-400ER when compared to the 777, as both came into service within a decade of each other?

... but it didn't have the range and ultimately didn't sell well.

Flight noted the following in 1999:

Anyone seeing the 61.4m (201ft)-long aircraft emerge for the first time could be forgiven for experiencing a certain deja vu. Not only is the -400ER a mere 3.6m shorter than the 777-200, but almost exactly 10 years ago, a similar "767-X" design was being proposed to airlines. This soon evolved into the all-new 777, and for a while the stretched 767 plans were shelved.

Delta's TriStar replacement competition therefore provided the expected battleground for yet another Airbus versus Boeing fight. Airbus pushed hard to get Delta aboard the A330-200 as part of a wider fleet deal involving widebodies and narrowbodies. Boeing was equally desperate for victory, as much to keep Airbus from gaining a foothold in Delta territory as to launch the strategically vital 767-400X.

I've also put together this derivative work showing the similar length noted by Flight above. 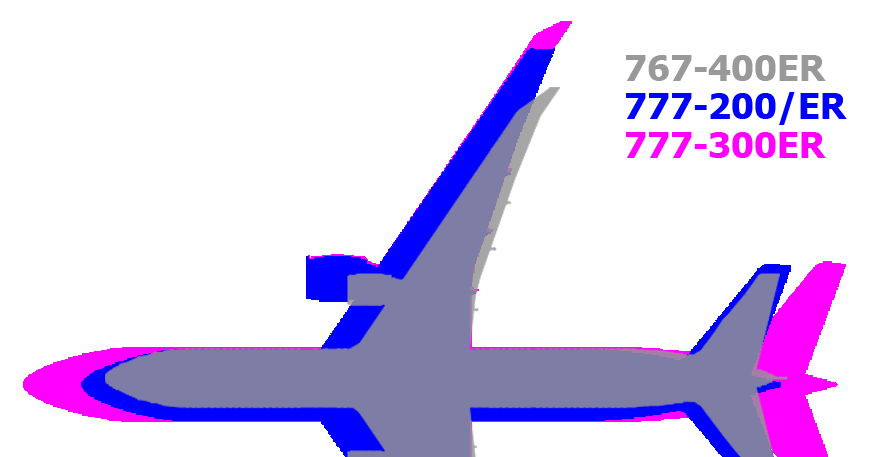 It's pretty clear that operators of the 767-400ER knew what they were doing when they selected that aircraft. Only United and Delta bought them and they are still in service even as older 767 models are being retired. The 764s have proven to be a good value proposition even though it did not sell well and is a unique bridge between smaller and older 767 models and the much larger 777s, especially when you examine passenger cost and revenue per mile.

They have been particularly useful for transatlantic service, and both United and Delta plan to fly them for at least ten more years -- and they've both decided to spend millions on them to upgrade their interiors to maintain parity with newer Airbus and Boeing products. It appears that both airlines are planning to keep them going until Boeing introduces the NMA (797). I hope that's what happens because there's no question that passengers greatly prefer two aisle aircraft over single aisle competition such as the A321LR or the A321XLR for seven to ten hour flights.

I still prefer the 777 over the 767-400 but can see why United and Delta continue to fly 764 over single aisle aircraft or a larger aircraft that does not sell out on the same length flights.

I take value proposition to mean criteria used by a purchaser to determine which aircraft to buy. Excluding financing deals and fleet commonality, the main criteria used when purchasing an aircraft are capacity, range, and seat mile cost.

Seat mile cost is trickier as airlines do the reports and they use different criteria. You would think that a larger plane would have lower seat mile costs, but configurations differ between aircraft, airlines, and trip length. You are also looking at the largest model of one series, usually the most efficient, and comparing it to the smallest of another, usually the least efficient. It's kind of a mess and the manufacturers argue about this all the time.

I think the only airlines which would have considered a 767-400 is one which already has 767s in the fleet. And even then it would be a product at the end of its life-cycle so fleet renewal considerations would play a part.

Not the answer you're looking for? Browse other questions tagged boeing-777 economics boeing-767 or ask your own question.