How do PAPI lights work?

Usually, there are four lights at the sides of runways which show airplanes' altitude status:

Here's how the PAPI lights work:

Depending on the angle of the viewer, a different color is seen:

Then each light is calibrated to an angle:

The good thing about this is that it's dead simple technology where very few things can go wrong: The lights have to be on and calibrated for the correct angle. The downside is that its usefulness decreases with lower visibility.

Some new systems appear to have solar panels as an off grid (and alternative/backup) power source which is sensible. Many systems today also have LED lights.

The system is independent and passive, in the sense that it never makes contact or note of the aircraft approaching. It lights up all to all aircraft in the beam. Hence, it 'works' for all aircraft at the same time.

Some new systems feature FAROS (Final Approach Runway Occupancy Signal) giving an indication that the runway may be occupied by another aircraft by flashing the lights.

For a little information on differences between similar systems to PAPI, see this link.

They use a lens system that projects the light in a narrow beam so each plane sees something different and makes the glide slope indicators a passive system.

you can see this nicely on a foggy morning: 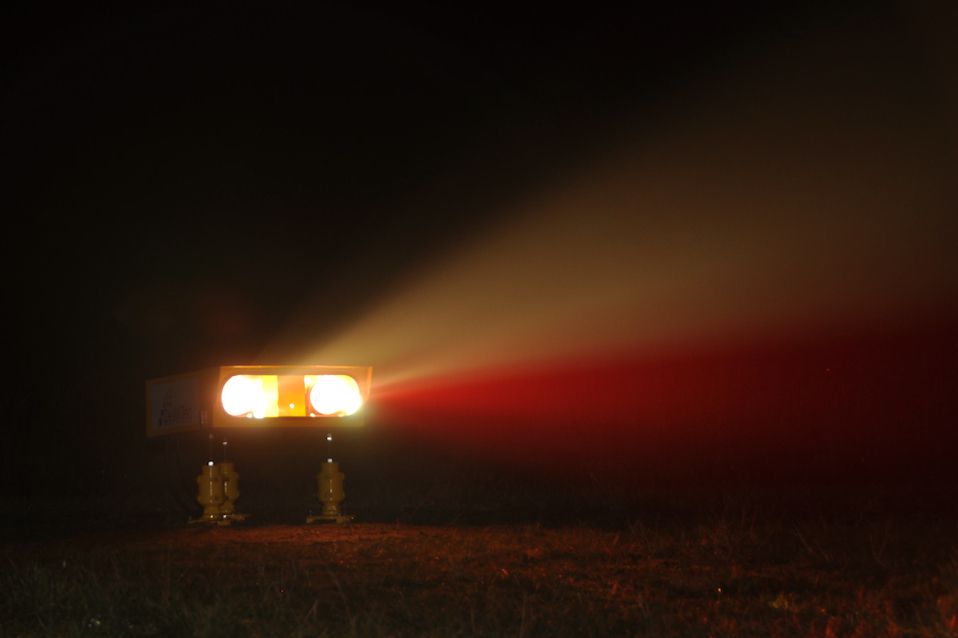 The lights you refer to are called PAPIs (Precision approach path indicators). They to do not change colour based on the altitude of the plane but are rather passive light boxes that have a different colour depending on the angle that you look at them.

Each light is mounted at a slightly different angle.

If you are at the neutral axis of such a light you will see a blend of red and white. 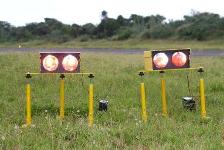 The PAPI lights are not set for any airplane, they're unintelligent displays that are visible in different ways based on the angle of the viewer. For that reason, there can be an unlimited number of aircraft in view, and each will see the appropriate color selection.

Not the answer you're looking for? Browse other questions tagged runways papi or ask your own question.

8
How to know if an airport has PAPI lights?
11
How to decide on which side of the runway the approach path indicator (VASI, PAPI) are placed?
9
What determines the positioning of PAPI lights from the runway threshold?
10
Why would a PAPI and ILS glide slope for the same runway not coincide?
11
How do Rapid Exit Taxiways improve aircraft movements?
3
What is the average deviation from the PAPI glide slope at the threshold?
5
Does a pilot follow the PAPI lights in the same way in all categories of aircraft?
13
Why is the aiming point distance shorter in the US vs. Europe for long runways?
15
Can we always trust the PAPI lights?