Would the Concorde have been better off using a tailed delta wing?

In one of the answers to this question about the Concorde's lack of high-lift devices on its wings, it was pointed out that the Concorde, using a tailless delta wing, wouldn't have been able to use flaps, since there was no horizontal tail aft of the wing to counteract the downward pitching moment that would result from deploying flaps.

On the other hand, a tailed-delta configuration (a delta wing with a conventional tail mounted aft of the wing) would have been able to use flaps, as it would have had a separate elevator further aft with the ability to counteract the flap-generated pitching moment. A good example of this would be the design for the Boeing 2707-300, which was to use a tailled-delta configuration and would have had some rather impressive flaps, but was cancelled in 1971 before even the two prototypes had been completed.

Given that it would have allowed the inclusion of flaps, would a tailed-delta configuration have been a better choice for the Concorde than the tailless delta they ultimately went with?

Edit: Better in that it would have greatly increased the Concorde's subsonic efficiency and allowed lower-speed (and thus less potentially-tyre-explodey*) takeoffs.

...The lack of high-lift devices considerably reduced lift at low speeds, requiring the Concorde to take off and land at higher speeds and angles of attack than if it had been equipped with flaps and slats. As well as greatly increasing drag (and thus fuel consumption) during takeoff and landing, this greatly increased the force carried by the main landing gear and the speed at which its tyres had to spin; as a result, if and when a tyre blew out (due to, for instance, a piece of debris left by the previous airplane to use the runway), the results would be much worse than with a tyre blowout on a subsonic airliner.

...[The addition of high-lift devices], along with slightly larger wings and more powerful engines, would have allowed the Concorde B to dispense with afterburners, considerably increasing its fuel efficiency and range.

* It happened a lot before the fatal accident.

The beauty of the pure delta configuration was you could get a reasonably low supersonic drag configuration in a planform with a lot of wing area, essential for really high altitude cruise and for reasonable landing speeds without high lift devices. It was a good overall compromise for Concorde's mission.

The Avro Arrow, produced then scrapped in Canada in the late 50s, also used a large pure delta plan form (which is thought to have had some influence on Concorde, a lot of Avro's engineers having joined the Concorde program when Avro Canada vanished). This allowed it to meet the RCAF's specification that required M2+ while being capable of sustaining a 2G turn at 50,000 feet, something no interceptor could do at the time.

Would a tailplane+flaps have avoided the risk of high-speed tire failures? Quite possibly, but tire failures can still happen and the debris will still hit the underwing where the fuel tanks are.

The solution to that would be a swing wing, which was studied and rejected because of the added weight and complexity.

Ground studies, backed by later flight experience, fully vindicated the earlier decision to avoid any form of variable-geometry wing as a means of achieving the supersonic-subsonic performance compromise. In supersonic military aircraft design, where operational economics is of secondary importance, the "swing wing" is a favoured solution to this problem. In the present state of the art, however, the weight and complexity of the swing-wing hinge mechanism rule it out for commercial operation (Concorde History).

Not just the Concorde

Even if the swing wing wasn't rejected, it would not have completely prevented the wing-piercing-rubber -- while searching for tire failures, I came across this: 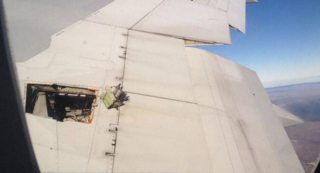 It was survived, just like how the Concorde survived similar incidents prior to the fatal one.

Not the answer you're looking for? Browse other questions tagged aircraft-design concorde tail delta-wing high-lift-device or ask your own question.

29
Why didn't the Concorde have flaps or slats?