What could cause uneven fuel levels in a Cessna 172?

Why was there such a disparity? Is this at all dangerous? Why did the right tank have less?

Consulting your handy POH (or one for a 172N that I Googled up) you'll find the fuel system diagram looks like the one below (click to enlarge - most high-wing gravity-fed fuel systems are similar). 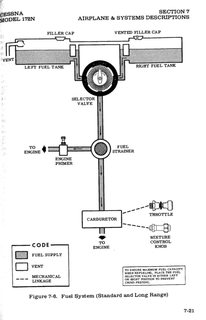 So there are a number of ways you could wind up with uneven fuel burn with this plumbing.
The most common ones are:

For more detail on causes for uneven fuel burn (and tips for troubleshooting it with your mechanic) check out Cessna Pilot's Association Technote 003.

Is uneven fuel burn dangerous? Maybe.
It's certainly something you should be aware of (part of why you want your fuel gauges to be at least somewhat accurate is so you can tell if your fuel burn is uneven in flight and correct it by switching to the fuller tank briefly).

Uneven fuel burn can be an annoyance (a 5 gallon difference is about 30lbs - potentially enough to notice on the controls), but it can also be a safety hazard: If allowed to go uncorrected you could theoretically get yourself into a situation where the right fuel tank is empty, and in a steep enough left turn you may not have enough pressure from gravity to get fuel from the left tank into the engine.

In an extreme case your right tank may be empty and your left tank may be so low as to unport the fuel pickup tube in a turn, potentially leading to attitude-induced fuel starvation ("The noisy part of the plane gets quiet until you level the wings").

I asked my instructor and this was his answer!

Fact: When a high wing plane (such as a Cessna 172 or a Cessna 150) is flown on a training flight with the fuel selector in the "Both" position (C150 fuel valves are always on the "both" position - even when "off") with a primary flight student at the controls, the plane will almost always land with more fuel in the right tank than in the left (but the very same plane may occasionally land with more fuel in the left tank with a slightly more experienced student, or - eventually - with equally balanced fuel tanks).

"Why is this?" you ask. "How can this be?" you demand to know! I ask all my students this, but I try not to give them the answer. The answer is completely obvious once they have flown for a while. Once they understand the most fundamental basics of flight, they will be able to tell me the secret of "The Nefarious Skyhawk Gas Gremlin". (But once in a while a CFI is compelled to point out the obvious).

WHAT IT IS NOT:

It is not because of a design flaw in the Cessna.

It is not because of an obstruction in the fuel line or the vent (while that is possible, this rare obstruction problem is not germane to the nearly universal "Gas Gremlin" phenomenon).

It is not because of turns and banks during flight.

An aircraft can do steep turns all day long; loops, wing-overs, and barrel rolls, ad infinitum, with the fuel selector in the "both" position, and never have a fuel imbalance. Yet a simple training flight will usually result in more fuel in the right tank than the left.

WHAT IS THE CAUSE?

Hint, the answer is related to the "native call of the CFI in his/her natural environment".

The cause is revealed, not by the trusty aircraft mechanic, nor by the psychic aviation consultant, but by the most simple indicator found in all airplanes: The slip/skid ball. The force that causes the ball to be pulled to the right side of the curved glass tube during takeoff, climb, and power-on stall practice, is the very same force that is pulling the fuel from the left tank into the right wing tank.

Note: this unbalanced fuel condition will also be caused when even the most experienced pilot is practicing side-slips and forward slips. But this is OK, and elicits only a silent smile from the CFI.

I have an f model 172 and as with most all skyhawks I have the fuel imbalance problem as well. I found that in the Cessna Service manual, the fuel vent has very specific measurements it is to be set at with only 1/32" + or - tolerances. My 1965 172 shows it to be 4 5/8" down and 1 3/16" behind the strut. I can tell you from experience it makes a notable difference if it is not positioned per the specs. When set correctly the difference is minimized to 2 gallons and always less in the right tank! While there is allot to be said about coordinated flight involved as part of the problem, I have always been very diligent to have the ball centered and found it didn't make any difference in the imbalance. But the vent position sure does.

This is a small discrepancy in a tank that is quite difficult to measure accurately: it's wide, short, 2 meters in the air, the filler hole is at one end and it's on a contraption that is rather sensitive to the angle of the pavement.

If you have (nearly) ZERO burn from one tank, you have a reason to see your mechanic and probe the fuel lines for a blockage.

The weight difference will not affect your flight. If one tank is empty and the other nearly full you may bank slightly to that side, but Cessnas can easily handle 800 pounds hanging on the wing strut.

Not the answer you're looking for? Browse other questions tagged fuel-tanks cessna-172 or ask your own question.

0
what would couse uneven fuel levels in a cessna 207?
6
What should I do if I get a fuel vent blockage in flight?

12
Cessna 172/182: Should I set the tank selector to the R.H. tank after parking the airplane?
8
How to do Weight & Balance for Cessna 172?
9
What are the landing stall speeds of a Cessna 172?
18
What is a Cessna 172's maximum altitude?
2
Cessna 172 steering system and torque link purpose
4
Why is the fuel pump in the startup procedure for a Cessna 172?
1
What would happen when the fuel tank of a Cessna 172 became (partial) vacuum during horizontal flight?
0
What is the difference between a 1974 Cessna 172 and a Cessna 172M?
0
Does the fuel selector switch of a Cessna 172 automatically turn 180° when pulling fuel shut off?
3
Turbulence from hot weather?