Why are there so many aircraft designs which look generally profoundly similar?

The low wing and T tail with two engines at the back. (CRJ, dc9)

The 'standard' shape with the mid aircraft wings, and vertical and horizontal stabilizers at the back, used from the E170 to the a380.

And while many general aviation craft are low winged or differ from a high wing tricycle single engine design, most seem to stick with that formula as well.

For some of the odder shapes, the question is 'industrial espionage?' but in the greater context, is it simple convergent evolution in that there are only so many shapes which are functional and useful so most things take on that general shape?

It’s an interesting question. Aviation historian Bill Sweetman wrote about just that in an Air & Space article called How the 747 Got Its Hump. The answer to the question is quite long and specific to the aircraft type and use but the short and sweet answer is that airplanes are a great compromise between a number of factors, including mission profile, aerodynamics, structures, propulsion, avionics, manufacturability, realities and practicalities of product use, and on a few occasions customer insistence and industrial espionage. See illustration below. 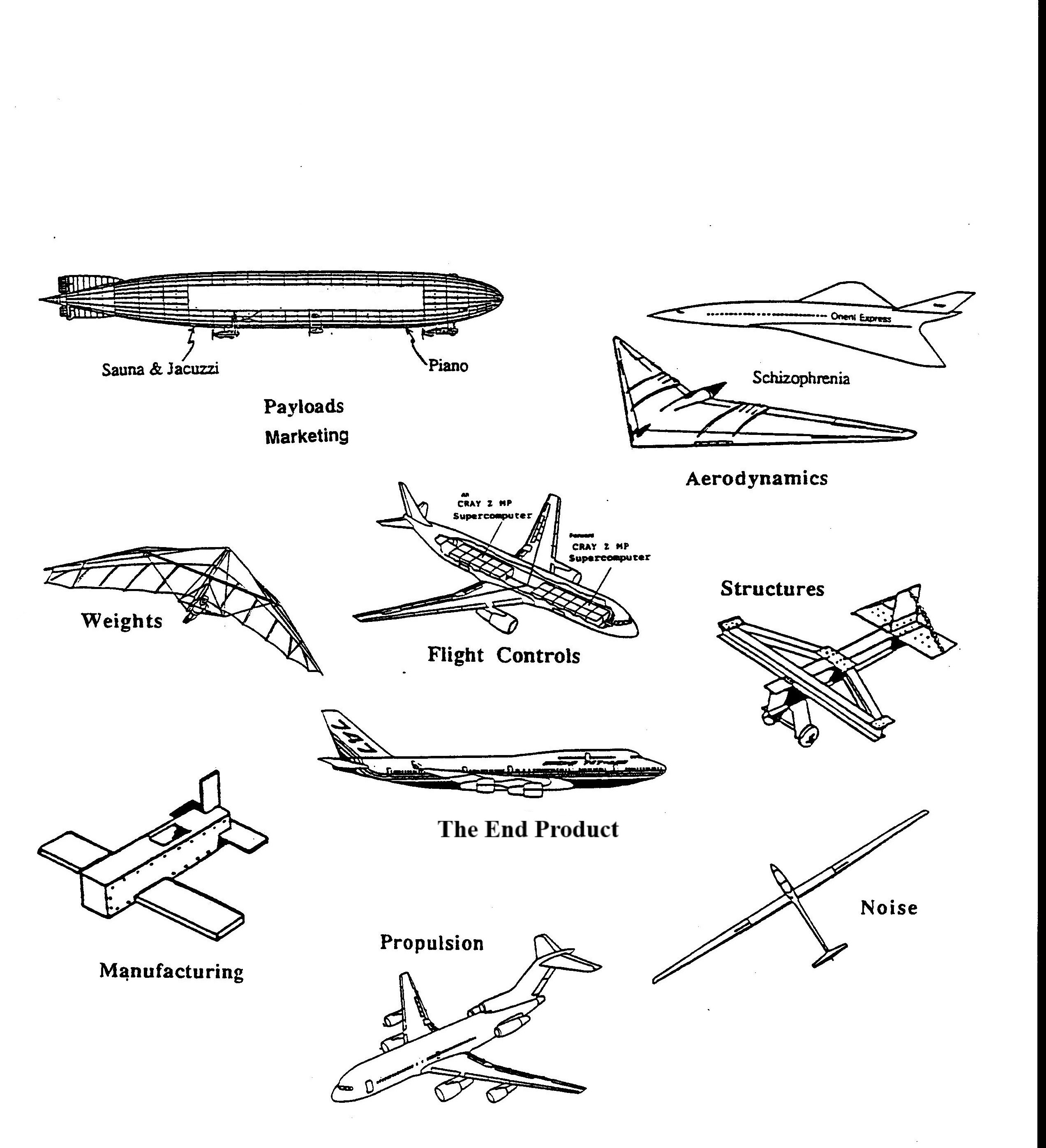 It just works out that, when all the factors above are taken into account, the designs you describe tend to be the best all around solutions for particular aircraft sizes, costs, payloads, mission profiles, safety, etc. Like any other artifact made by humans, aircraft are but single answers to open ended design problems; a compromise between all of these competing requirements into a tangible product. No one answer is 'correct' per se, but these kinds of aircraft designs seem to be the most optimal and every single design team when confronted with the requirements and design constraints create much the same thing.

To put it simply, aircraft design is a war of compromises, and when characteristics and configurations of a design are combined in different ways, there emerges some combination that hits a sweet spot.

Like an airliner designed to cruise at high altitude (lots of area + high aspect ratio), near trans sonic speed (lots of sweep), needing 4 engines (best place to put them is on the wings for efficiency and centre of gravity reasons), with the engines on pylons forward (from the discovery by Boeing, during the B-47 program, that the aerolastic flexibility with the rear weight bias of a long skinny swept wing was a problem and the engines could be used as mass balances by putting them on pylons out front to move the wing's centre of mass forward). And presto! There's your near universal airliner configuration.

Or take the lowly Cessna 172. It's configuration satisfies a whole range of requirements, none perfectly, but all just good enough to make it the most practical arrangement, making it the light aircraft of the ages.

My favourite is the DC-3. A balance of compromises so perfect that over 85 YEARS after it was designed and almost 75 years after it was last built, it is still to this day a viable business tool that people buy, not for show, but to put to work.

60
Why is there really only one basic design for passenger airplanes?
2
Is there a term for the general design used in most modern fighters?

19
Why the different wing and tail designs in similar sized jets vs turbo prop?
16
Why are military and civil aircraft landing gear generally so different?
18
Why are flight recorders generally located in the tail?
3
MD81: Why are there so many lights on the fuselage?
5
Why are there so many moving parts used in the landing gear?
9
If no low-speed compromises were made, what would an ideal Mach-3 wing look like?
7
Why do many stealth aircraft have a similar shape and design?
5
Why are many early gliders high-wing designs as opposed to newer designs?
6
Why are Vertical tails generally tapered?