Why did Concorde not have horizontal stabilizers?

The Concorde did not have horizontal stabilizers or elevators. As a result, the pilots have to move fuel around the aircraft to trim it up or down, as sluggish and hazardous move.

Why did the design team chose not to use a horizontal stabilizer? Was it because of the understanding of supersonic aerodynamics and/or technology of the time? Or, was it due to some aerodynamic principles? If someone were to design the Concorde today, would they still use the fuel transfer method to balance the CG?

aircraft-design concorde horizontal-stabilizer
Share
Improve this question
asked May 15 '18 at 3:08

It does have elevators in the form of elevons at the trailing edge. A delta is effectively a tailless flying wing with a really long chord. Like any flying wing, pitch stability is achieved by down force generated at the local trailing edge by a control surface that does the same job as a regular elevator/stab, by applying down force to balance the forward pitching moment of the CG ahead of the centre of pressure (an airplane is really just a teeter totter with the C of G at one end and the elevator at the other).

Fuel transfer is used to keep the C of G in a sweet spot range to minimize trim drag, which is the penalty taken in generating the down force at the rear, so that the down force can be no more than necessary for adequate pitch stability.

As for why they didn't use a horizontal stabilizer, the reason is that the delta plan form with elevons provides the required stability and control in pitch and allowed the designers to dispense with a separate tail surface, greatly reducing the drag of a separate tail (not eliminating, because there is still a drag penalty from the elevons generating down force). Same reason anybody goes with a flying wing. Plus, you need lots of sweep for low supersonic drag and lots of wing area for high altitude efficiency, so a tailless delta fits the bill.

A limitation of this is a narrower CG range (a more limited forward CG than with a regular tail that is farther aft and has more leverage) because the elevons have a short moment arm, a limitation of all flying wings. The ability to transfer fuel to adjust CG would help with this and I think Concorde's modest passenger loading didn't cause the CG range issues that a normal airliner would have to deal with. 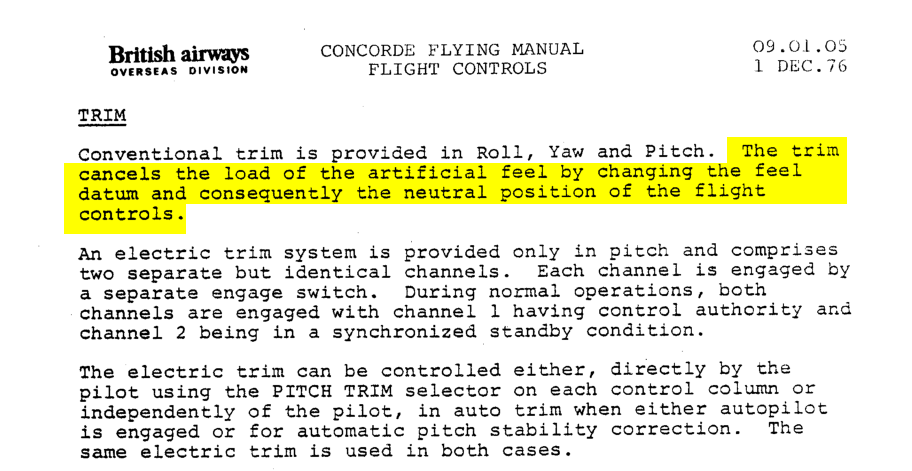 As the manual shows, the Concorde's trim was conventional (and not by fuel transfer) and that the control surfaces shifted the neutral position as would be expected (here's a schematic).

Moving the fuel around is not managed by the pilots, rather the flight engineer. It's a long-term process that has to do mainly with the lift force shifting aft as the plane goes supersonic, and shifting forward again as it slows down. Resorting to an aerodynamic solution for the shifting center of lift was not acceptable:

To make the adjustment by aerodynamic methods as in the subsonic aircraft is not feasible because any deflection of flying control surfaces would have to be made throughout the supersonic cruise and would cause unacceptable drag (Concorde History).

Delta wings do not need a trimmable horizontal stabilizer (THS) by default since the elevons are far back from the CG and are able to control the pitch. There are few deltas with a tail, like the MiG-21, but that's for increased maneuverability since it's a fighter.

A list of 59 tailless deltas can be found here.

So, once the researchers and engineers concluded the delta wing is the best choice for supersonic flight in the Mach 2 regime, there was no need for a THS.

Because horizonal stabilators are there to balance the pitch moment from the main wing lift, which, in a conventional aircraft, (where the main wing center of pressure is behind the aircraft center of gravity), would cause the aircraft to pitch nose down. The horizontal stabilator at the tail creates a down force, which creates a nose-up pitching moment equal to the nose down pitch moment from the main wing. The down force at the tail is significantly less than the Lift from the main wing (but further away from the CG) so the moment is creates balances the Main Wing Moment. Realize that the above description is a simplification, as actually, all of the forces are actually pushing on each tiny little bit of surface area of the aircraft wings, fuselage, horizontal stablator, everywhere, and the description above is just an arbitrary way of splitting up the effects of all those tiny individual forces into a few major pieces, which are equivalent to what is really happening, so we can understand and talk about it all with some understanding.

On a Delta wing, without a horizontal stabilator, exactly the same thing is happening, but it is now the result of the distribution of all the tiny lift forces over the entire surface of the one single delta wing. Over most of the wing, except for near the trailing edge, the forces are pushing the aircraft up, nd because most of the wing is behind the CG, rotating the nose down. But the trailing edge of the wing is curved upwards slightly, so that far back from the CG, the forces on the wing are pushing the aircraft down with a smaller force, but much longer moment arm (further away from the CG, and this rotates the nose up by the proper amount to balance the nose down pitching moment from the rest of the forces forward on the wing.

Not the answer you're looking for? Browse other questions tagged aircraft-design concorde horizontal-stabilizer or ask your own question.

11
What are the advantages and disadvantages of a delta wing compared to a swept wing?
4
Could the Olympus 593 have been windmill-restarted during supersonic flight?
3
How does the pitching moment change as the speed of A/C approaches critical Mach number?