Why can not two modes coincide perfectly for some cases in Flutter phenomena?

I have a question about flutter phenomena. As you know, flutter occurs when two modes (for example, first mode and second mode) coincide (that is, after a specific velocity, the frequencies of two modes will be the same and equal) and the damping term will change into positive which causes failure. 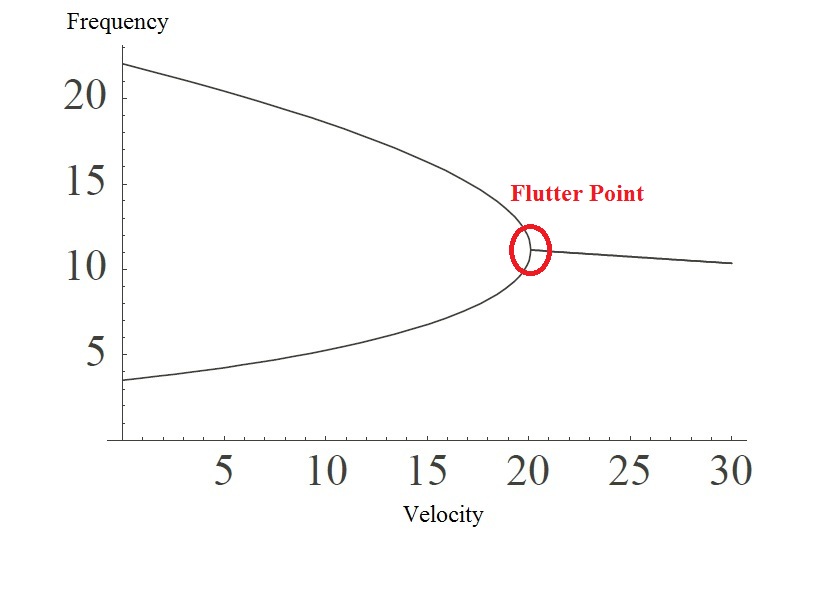 However, for some cases, frequencies of two modes do not coincide perfectly (they are not equal) and damping parameter negative sign will change into positive, which mean flutter is happening. 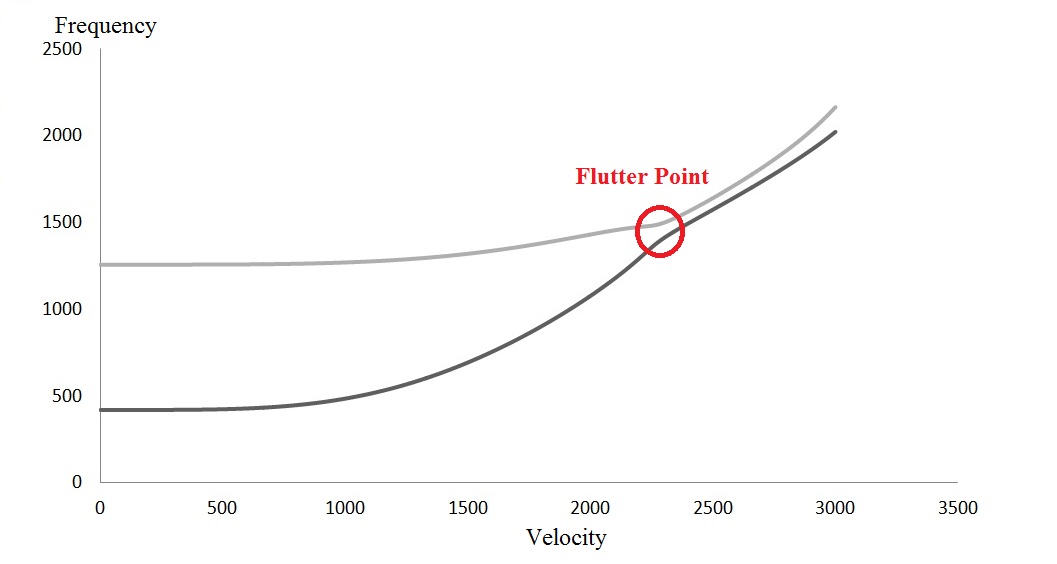 Why is this happening? Why can't the frequencies of two modes coincide perfectly?

Flutter happens when the frequency of two modes coincide. These modes must be of different nature, so their frequencies can move in different directions. Typical examples are elastic modes (with eigenfrequencies independent of speed) and aerodynamic modes (with eigenfrequencies proportional to speed). When flight speed increases, the aerodynamic mode becomes faster (think of dynamic pressure as of the stiffness of the spring in a spring-mass system) while the elastic mode stays constant. At some point both have the same frequency, but flutter will already appear when they are close enough so each builds up the amplitude of the other. This will become more efficient when the frequencies are identical, but this is academic: When flutter starts, it is a bad idea to accelerate further.

Example for an elastic mode: Wing bending. The first mode is just the tips moving up and down, the second mode is one tip up, the other down, which will rotate the fuselage, the third mode (or for pedants: The second symmetric mode) is again both tips up, but now with the midspan section moving down and so on. They are harmonics (like the oscillations of guitar strings), so their frequencies are at a fixed ratio, with the first mode having the lowest frequency. See below, from top to bottom. 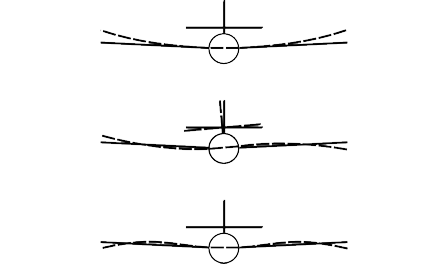 Example for an aerodynamic mode: Aileron flutter, fast-period mode (especially when coupling to the bending mode in sweptback flying wings).

For me, your diagrams don't make sense. They should look more like that: 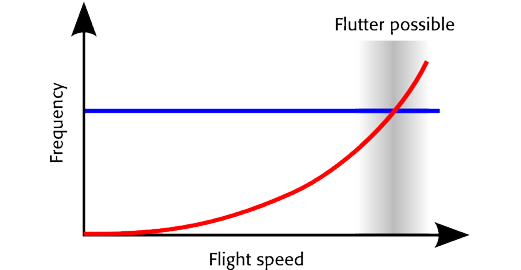 With Shellp's comments I realized that the answer above is too simple. The lines in the graph are for the static case of the elastic vibration. Once this wing moves through the air, it's movement will change the local aerodynamic forces, which will modify the flutter modes. The motion-induced aerodynamic forces counteract the elastic motion at slow speeds, adding damping (negative, because they reduce the motion). With damping, the frequency of the mode is reduced.

At higher speeds, delays in the buildup of pressures mean that now the aerodynamic forces lag behind the motion, and once this lag exceeds a quarter of a period, they produce positive damping (this is an unfortunate wording, so stay with me. The damping term is a negative number when it really damps the motion, but when the term becomes positive at higher speeds, it is still called damping, but now the motion is excited instead of damped in the common sense. So let's call positive damping "excitation" from now on).

This excitation now increases the flutter frequency, so in reality the two flutter phenomena now get locked together. The first graph in the question above shows the frequency going down with speed, which looks unusual to me. The second graph shows this locking-in with an increase in frequency over speed, but at very high frequencies (it must be a small structure). If you want, the excitation is pushing the elastic frequency up, so both lock together without converging completely. But that cannot last forever - at higher speeds they should diverge, but in reality the structure is overloaded way before that happens.

Not the answer you're looking for? Browse other questions tagged safety aircraft-design aerodynamics flutter aeroelasticity or ask your own question.

10
How are aircraft wings protected against flutter - aerodynamic oscillations that can break bridges?
9
How do you choose engine placement for under wings engines?
4
What property of a wing allows it to flex?
4
Does flutter disappear above the flutter speed?

28
Why do some fighter jets have two pilots while others have only one?
17
Why is flutter a function of true, not indicated, airspeed?
5
Why do some fighters have two engines?
4
Why do some aircraft have symmetrical tip airfoils while others do not?
0
Wing pitching moment decomposition into two terms
3
Is it common for panels on a plane's body to not be perfectly aligned?
6
Why not separate out the two definitions of V-1 into two separate Vspeeds?
6
Why does an A300/310 in LAND or GO-AROUND mode have to be at least 400 feet AGL for manual control column movement to disengage the autopilot?