What is the difference between active and passive sidestick?

What is difference between "active" and "passive" sidestick?

Which aircraft have active sidestick?

Generally speaking, if you have used a joystick on your PC to fly Microsoft's Flight Simulator, such as Microsoft's Force-Feedback Sidewinder Pro, you've used an active side-stick.

According to the Patent Application cited above, the patent is for an Active Side-Stick technology described as "pilot flight control stick haptic feedback mechanism provides variable force feedback to the pilot flight control stick." One of the 'issues' with the current passive side-stick technology (approved for use) used on aircraft such as Airbus' A380 is that there is no tactile feedback when using the side-sticks, such as a pilot would feel using an old-style column or yoke. In a Cessna 172, for instance, when you pull/push/turn the yoke, there is actual tactile feel, if you pull back strongly in-flight, you'll 'feel' the forces exerted against the airflow. Passive side-sticks have none of this 'feel'.

Active SS technology attempts to replicate the forces on the joystick.

Active SS technology is currently used on most miltary aircraft using side-sticks, but does not appear to have yet made its way into civilian airliners.

(If I've gotten stuff wrong, I'll remove/fix this answer, as I am not an airline pilot and have never had the opportunity to fly military hardware.)

A passive sidestick only provides back pressure forces when it is deflected, by mechanical phenomina such as springs, dampers, and friction. It is passive in that it cannot be made to move other than by pushing against it, it never moves by itself.

An active side stick has some element installed that enables movement of the stick other than by hand force: a motor for instance. This is technology that has been applied for over half a century in flight simulators.

The side sticks in the Cirrus SR22 are active side sticks, they are coupled directly to elevators and aileron and provide direct feedback of the aeroforces. 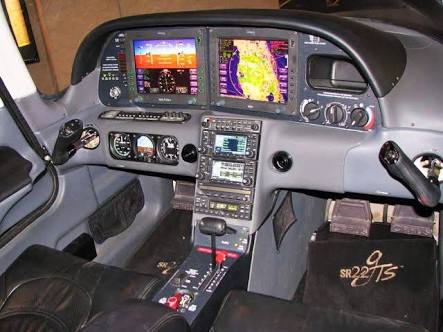 When I worked for a company making force feedback systems for flight simulators, I worked on a contract from Mercedes for making an active side-stick for a test car. Driving a car with a passive side stick results in Driver Induced Oscillations: command a left turn, the sideways acceleration applies force on your arm which moves the stick, you then correct etc etc.

An active stick allows acceleration feedback into the resistance force signals, so that the driving arm does not move but is held in position by a neutralising force, proportional to acceleration. The active 2-channel side stick was driven by electric motors with computer driven force resistance. The test drive on their circuit in Stuttgart was very enjoyable.