How is shear stress distributed on an airfoil? 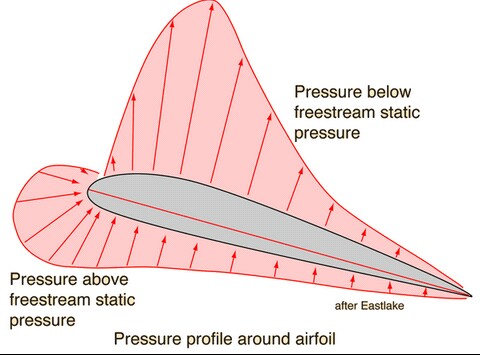 aerodynamics airfoil
Share
Improve this question
edited May 8 '18 at 15:48

Shear stress is proportional to the speed gradient at the wall. This means:

The shear acts along the local flow direction, so it is mostly front-to-back. Only near the wingtips, where lateral flow becomes non-negligible, will a lateral shear component become noticeable.

Friction drag over chord for an E502mod airfoil at 3° AoA. Blue: Top surface, Red: Bottom surface. Source: XFOIL 6.97. The transition points are clearly visible: It is where shear shoots up again at mid-chord. Note the separation bubble ahead of the transition point on the bottom side: It is marked by negative values of shear.

25
How do insects decrease aircraft performance?
14
Is airflow ever laminar in the boundary layer, near the wing leading edge?
2
What is the amount of lift produced by friction?

2
Why is this airfoil curved upwards on the bottom part of the airfoil?
3
How to read representations of pressure around an airfoil?
6
How do I choose the correct NACA airfoil for my requirements?
5
How to read the pressure diagram of an airfoil?
0
Why does Lift and Drag calculation over an airfoil ignore shear stress?
4
Transonic Airfoil with high critical mach number
2
What is the amount of lift produced by friction?
1
How to calculate pressure distribution over an airfoil from its coordinates?
1
Does total aerodynamic force include skin friction/shear streses contribution?
2
How do I find the shear center of an unsymmetrical airfoil?