Why didn't the Concorde have flaps or slats?

It's well known that the Concorde had no flaps or slats. The lack of high-lift devices considerably reduced lift at low speeds, requiring the Concorde to take off and land at higher speeds and angles of attack than if it had been equipped with flaps and slats. As well as greatly increasing drag (and thus fuel consumption) during takeoff and landing, this greatly increased the force carried by the main landing gear and the speed at which its tyres had to spin; as a result, if and when a tyre blew out (due to, for instance, a piece of debris left by the previous airplane to use the runway), the results would be much worse than with a tyre blowout on a subsonic airliner.

Interestingly, a "Concorde B" was planned for Concorde 217 and onwards, which would have been equipped with slats (although still no flaps); this, along with slightly larger wings and more powerful engines, would have allowed the Concorde B to dispense with afterburners, considerably increasing its fuel efficiency and range. Unfortunately, production ended with Concorde 216, the aircraft immediately preceding the first Concorde B, so no Concorde Bs were ever built.

Why didn't the Concorde, as built, have flaps or slats?

Flaps change the pitching moment of a wing. After all, they add lift over the full chord, so the sum of the increased lift attacks at about mid-chord, which is a quarter chord aft of the regular lift. If there is no separate tail surface to compensate for the pitching moment caused by that extra lift, the aircraft will quickly pitch nose-down and crash.

Next, flaps change camber and, therefore, are destabilizing the wing. Without a stabilizing tail, a cambered delta configuration will become unstable. The only camber which is helpful for delta wings is at the leading edge and must be compensated by a little trailing-edge up deflection of the control surfaces. Positive camber near the trailing edge is destabilizing and can only be tolerated on a flying wing with artificial stability augmentation.

Slats are helpful for delaying flow separation to higher angles of attack and allow a wing to create more lift. To understand their effect, it is not enough to consider what they do to the flow around the wing, but also the effect of the wing on the slat needs to be understood. A slat is like a small wing flying just ahead, and therefore in the upwash, of the main wing. The wing will induce a very high lift on the slat and in turn see its suction peak around the leading edge greatly reduced, which helps in keeping the flow downstream attached. The comparison plot below should illustrate this effect nicely: 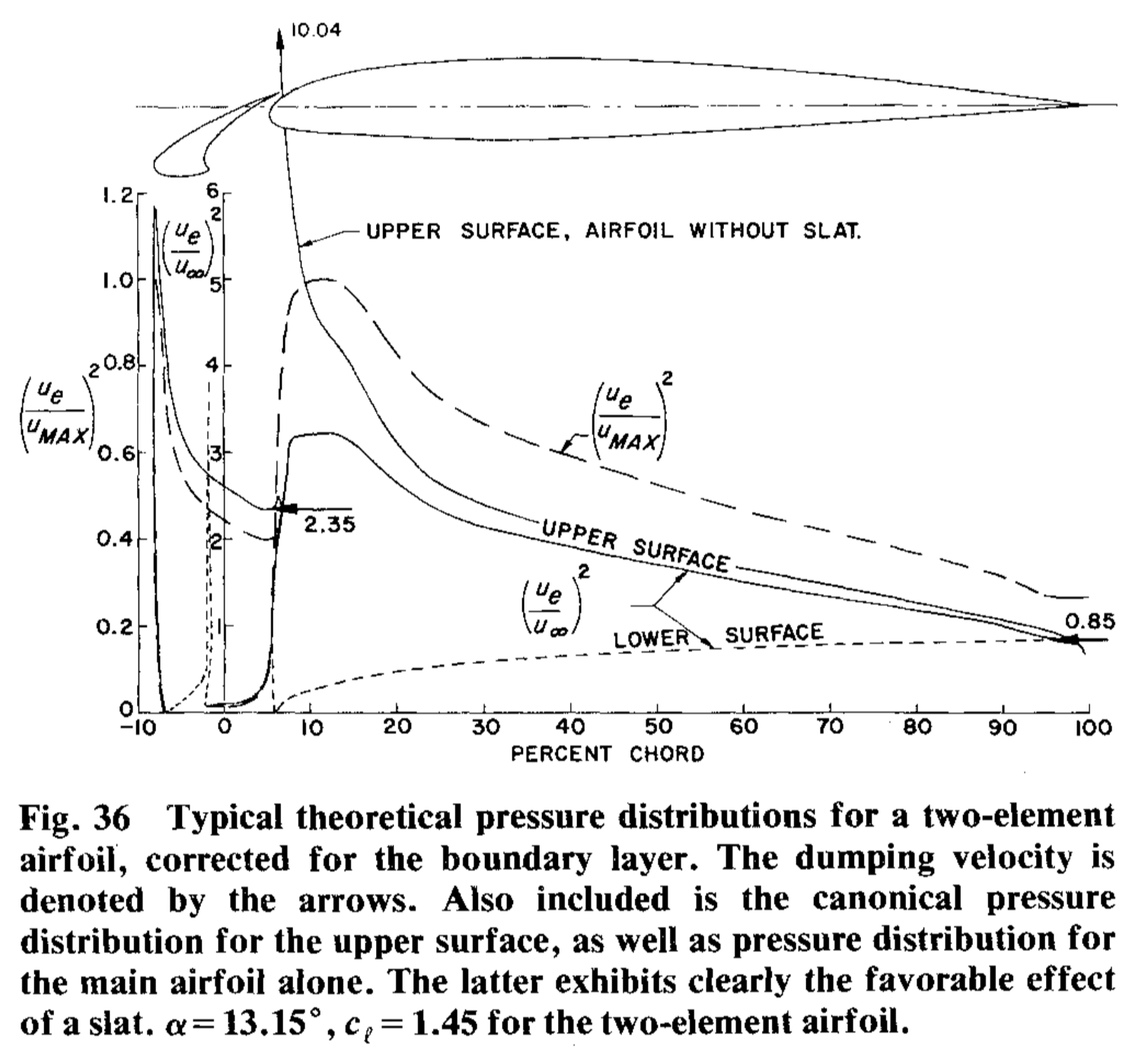 But a delta wing at high angle of attack does not have attached flow on its upper side. It makes use of flow separation at the leading edge which creates a powerful vortex over the upper wing. This is called vortex lift. So for take-off and landing, deploying leading edge devices would help Concorde only a little - they are most helpful in the region just before vortex lift kicks in. This would be for subsonic cruise, for which the original Concorde wing was completely unsuitable. Adding camber at the leading edge would had increased subsonic L/D a lot, so the subsonic cruise segments (like all flight above land) and flight in holding patterns would had been much more efficient. That was not considered initially, and the lower complexity of an un-slatted wing was preferred.

With Concorde B, a span increase and the addition of variable leading edge droop (no slats!) were proposed. The picture below is taken from the original web site which has been the source for the site you linked to in your question. 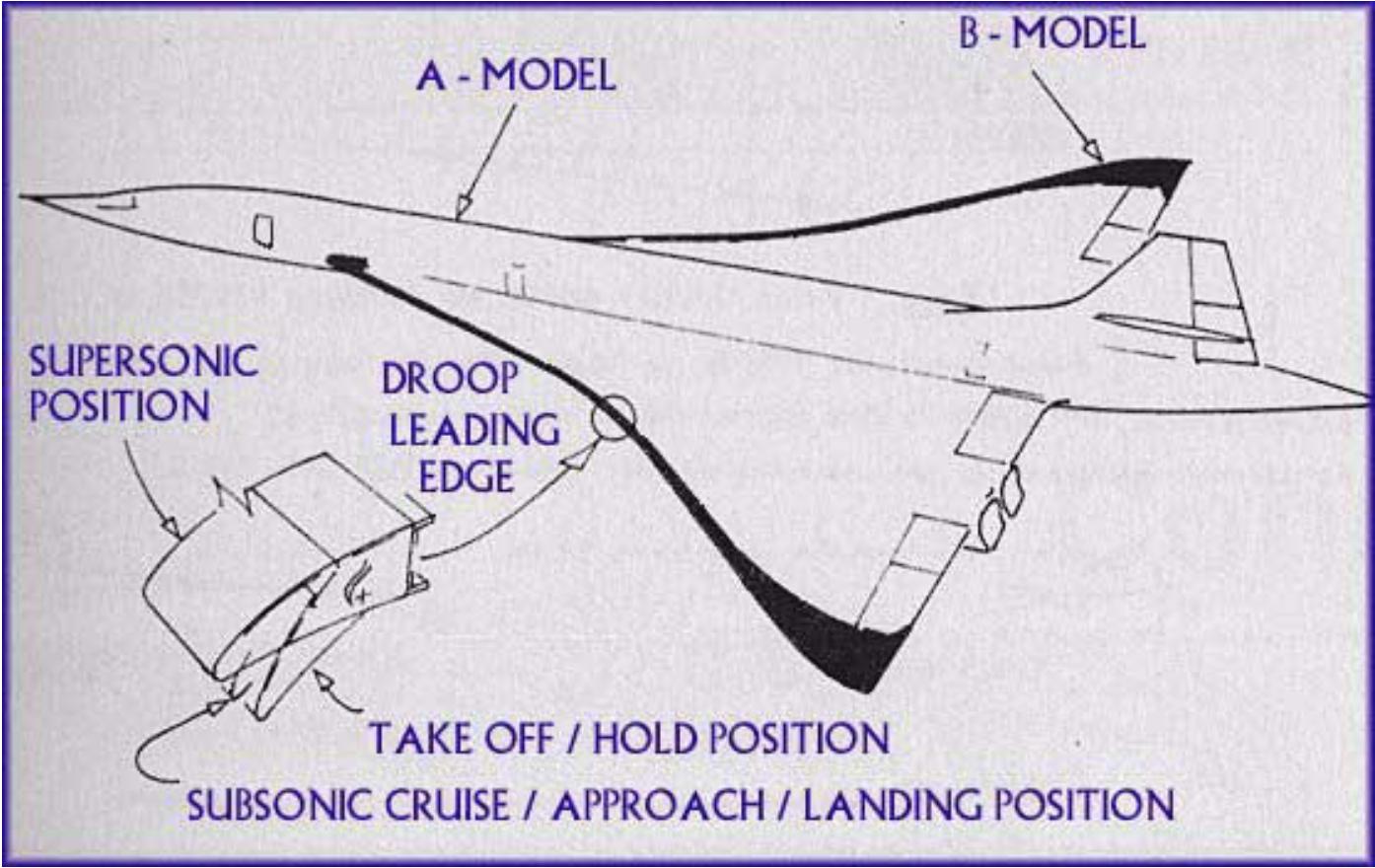 If you now look how the L/D would had been improved by this, it becomes obvious were the leading edge devices helped most. The L/D improvement at take-off and landing, by the way, can be mostly attributed to the span increase.

Concorde A and B aerodynamic efficiency comparison (picture source)

This information is missing from the site you linked to, but is essential for understanding why Concorde B had variable droop added: It should help to extend range beyond the Paris-New York connection and allow more efficient subsonic flight (especially the hold at 250 kts).

Because with a delta wing the trailing edge has the elevators and it's too far aft to have a flap. They depend on wing area and the ability to operate at much higher AOAs than straight wings to get the speeds down.

As for slats, they don't increase Clmax all that much, only a little bit from the increase in chord in drooping the leading edge. The main function of slats is to function as a convergent nozzle to inject a sheet of higher velocity air along the top of the wing, to increase the stalling AOA to allow the wing to develop higher lift by operating at higher AOAs. A normal wing with a stalling AOA of around 15 degrees will have a stalling AOA of around 25 deg with slats extended.

Delta's already operate at very high AOAs when slow because of the giant vortex generated by the steeply swept leading edge which delays the stall. Adding a slat doesn't provide enough additional benefit. I can't think of any delta wing a/c with slatted LEs although maybe someone knows of some. Leading edge flaps yes, but not slats.

Not the answer you're looking for? Browse other questions tagged flaps concorde high-lift-device slats or ask your own question.

29
What is vortex lift?
6
Why doesn't extending the flaps on a B-2 send it into an uncontrollable dive?
3
Can thrust vectoring be used to enable the use of flaps on tailless delta-winged aircraft?
7
Could Mach 1.4 be a better design point for SST?
2
Would the Concorde have been better off using a tailed delta wing?
3
Does tailless delta configuration retain any advantage over conventional configuration with straight wings at high subsonic speeds?
2
Is a flying wing optimal for high altitude craft?
2
Why didn’t the Concorde have flap-canards like the Tu-144?
2
Are there any airplane designs that are (relatively) insensitive to the effects of airframe icing?

5
What would have happened when the Concorde's low-pressure emergency system brought it lower mid-flight?
1
Does the Piper Aztec have flaps and slats and if so what kind?
12
When does a 'flaps/slats misconfiguration' warning sound during takeoff roll?
2
Would the Concorde have been better off using a tailed delta wing?
2
Why didn’t the Concorde have flap-canards like the Tu-144?
5
Do leading edge flaps increase the critical angle of attack?
11
Why are Krueger flaps called flaps and not slats?
5
Why is there an altitude limitation on operating the slats/flaps on the A320?
2
Does the A220-300 have krueger flaps or are all of its leading-edge highlift devices slats?