Why do simultaneous-ops parallel runways need to be so far apart?

In the answers to this question about Denver's widely-scattered pinwheel of runways and this question about Schiphol's runway out in the middle of nowhere, it's mentioned that parallel runways are required, by both European and U.S. regulations to be over a kilometre apart in order to be able to have simultaneous departures or simultaneous arrivals on both runways. In contrast, if one runway is departing an aircraft while a parallel runway is landing an aircraft, the runways need only be a few hundred metres apart.

Why is there such a large runway-separation requirement for simultaneous arrivals or simultaneous departures from parallel runways? It can't be for aircraft separation, since an aircraft is allowed to land on a runway quite close to a parallel runway that is simultaneously departing an aircraft, despite the possibility of this resulting in a head-on collision if one or both aircraft drift off track, so what, in fact, is the reason for this?

Wake turbulence is a factor for the trailing plane whether on the same runway or a parallel one, but RECAT has helped reduce the over conservative separation (ICAO).

For your last point on departures and arrivals on parallel runways, a minimum centerline spacing is required: 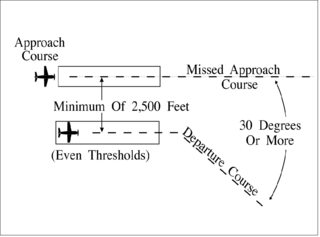 The geometry of the approach, as well as the lateral separation between the two approaches and prevailing local meteorological conditions, provide the wake turbulence avoidance necessary for reduced separation dependent approach operations.

Figure 3 shows the aircraft arriving in a staggered fashion, 1 nautical mile diagonal separation with runways 2500 ft apart (parallel runways separated by less than 2,500 feet, also referred to as, Closely Spaced Parallel Runways (CSPR)). The text also describes how the lead aircraft follow a lower glide path than the following aircraft such that the lead's wake turbulence isn't a factor for the following aircraft.

It is usually to guarantee sufficient aircraft separation when visual separation is not available (bad weather). See also Why is one of two parallel runways sometimes closed in foggy weather?

It can't be for aircraft separation, since an aircraft is allowed to land on a runway quite close to a parallel runway that is simultaneously departing an aircraft, despite the possibility of this resulting in a head-on collision if one or both aircraft drift off track

There can't be a head-on. Unstated in that requirement is that both runways are used in the same direction. If the arriving aircraft has perform a missed approach, it has procedures to direct it away from the other runway. Also, the departing aircraft will be advised. Under normal circumstances where the landings are executed, there's no overlap of tracks in the air, only on the runways.

Not the answer you're looking for? Browse other questions tagged airport runways airport-design parallel-runways airport-operations or ask your own question.

22
Why is one of two parallel runways sometimes closed in foggy weather?
23
Why does Schiphol Airport have such a long taxi?
11
Why would the runway separation for parallel triple simultaneous precision approaches be dependent on airport elevation?
5
Why are the runways on Denver Int'l very separated from the terminals?
3
How are the runways operated at Toronto Pearson?

20
What is the minimum distance allowed between two parallel runways?
8
How does Chicago O'Hare's tower sequence aircraft at peak capacity?
11
Why would the runway separation for parallel triple simultaneous precision approaches be dependent on airport elevation?
11
How do Rapid Exit Taxiways improve aircraft movements?
4
How are arriving aircraft assigned to runways?
10
How will aiport operations at KOAK be affected when taxiway W is promoted to a runway?
7
Why is there no numbering system for more than three parallel runways?
28
Why do airports in the UK have so few runways?