Which aircraft have fought against its own type in active combat?

The criteria for this question are

It's difficult to see circumstances in which it would happen; but in over 100 years of air combat I think it likely to have occurred at some point.

Probably not the only situation, but in 1948 Israeli Spitfires faced Egyptian Spitfires, and just before the truce also faced a few RAF Spitfires that were too close to the combat area (reference)

Captured aircraft being used for evaluation is quite common, but I can only find one instance of them being redeployed actively: during the Spanish Civil War. Among a number of aircraft that were captured by the Republicans was a squadron of Fiat CR.32:

During the war, the Republic captured at least 11 Fiat Cr.32; some of them were captured when the troops occupied anbandoned airfields, one more when its pilot deserted, three when italians pilots landed in enemy airfields and another one rebuilt at La Rabasa using wrecks... The Cr.32 that stood [remained] in Spain were transfered to 71 Group, used to defend Alicante. [source]

It's possible they went head-to-head with the Aviación Legionaria CR.32s; I think it's safe to say that the opposing air forces were both using the same type of aircraft in active operation.

the aircraft is often flown by Aguirre himself

He's credited with shooting down a number of CR.32s himself, although none while flying his captured CR.32. source 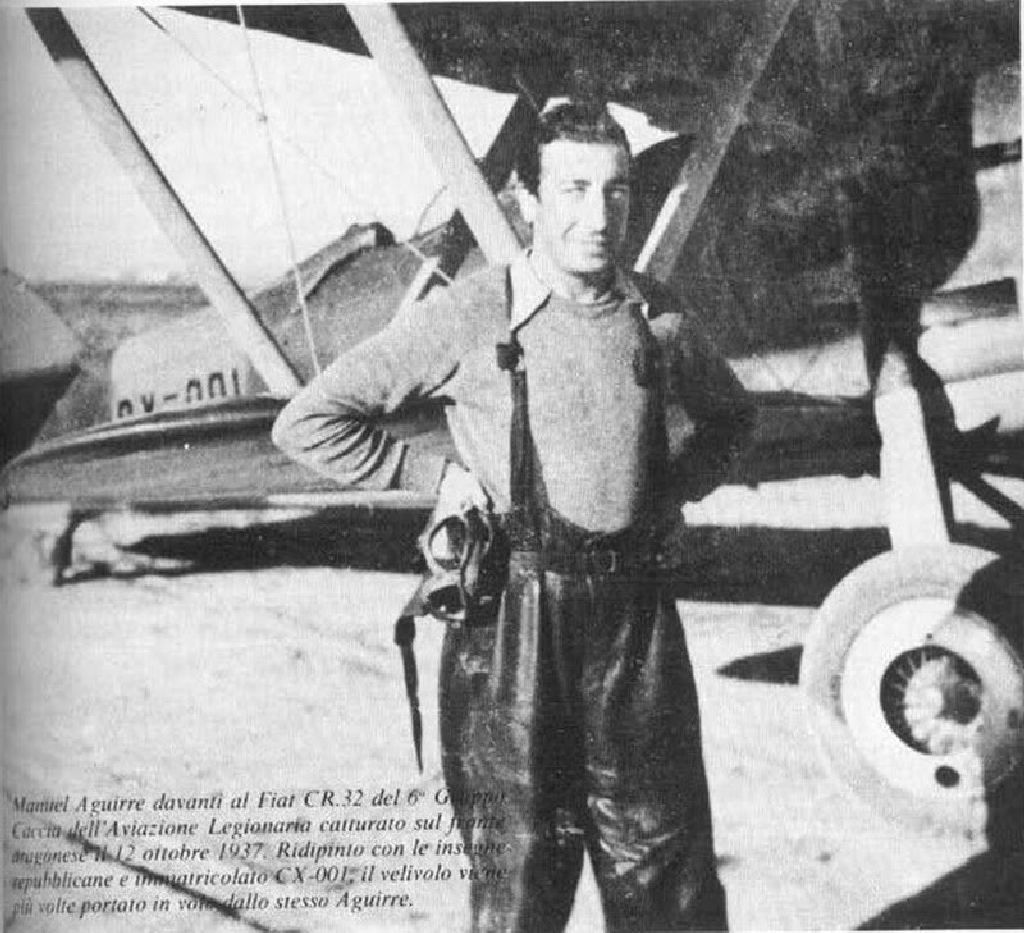 There was an account of Soviet MiG-17s engaging in a fight with Hungarian MiG-15bis in 1956 (I could only find an archive quote now). They ended up crashing into each other (whether deliberately or not) in the Austrian airspace.

This might formally not qualify, but arguably the difference between MiG-15bis and MiG-17 is smaller than between, say, F-15A and C, or even between Tu-22M2 and Tu-22M3.

One story originally told by Martin Caidin in his book on the P38, was the tale of the phantom P38, one that had been captured by the Italians and was flown in US colors by one of their pilots, Guido Rossi, to shoot down stragglers after coming in close under the guise of being an escort.

Supposedly, this morphed into a struggle between Rossi and one of his victims, Lt Harold Fischer, who survived the shoot down. Fischer requested a YB40, a B17 with a lot of extra guns and ammunition, to go hunting Rossi. Fischer went so far as to find Rossi's wife, who was living in Allied controlled territory, and paint her picture and name on the YB40 to draw Rossi in, and eventually shoot him down. Both survived the war. When Fischer died as the result of a crash during the Berlin airlift, Rossi was at his funeral.

The way the story is told has elements of 1940's fiction about it, so it may have 'grown in the telling'. But, like a lot of wartime stories, it probably derives from an actual incident.

Interesting side story that came up while looking into this... the 500 round belts of ammunition for the M2 50 caliber machine guns on the B17 and B24 were 27 feet long. Supposedly, the expression 'give them the whole nine yards' derived from a bomber gunner dumping an entire belt of ammunition at an attacker.

I recall that Hungarian and Romanian He 112's were active at the same time during their minor tiff over Transylvania, although I doubt they met in combat.

Various PZL designs ended up used throughout the area, so I would not be surprised if they were also operating against each other.