Why can't I hang glide in NYC?

I was stopped by NYPD for attempting to hang glide in an uncongested area by Midland Beach, Staten Island. They called their Legal Bureau and came back with "Illegal Navigation" and if I was to continue I would be arrested and my hang glider would be seized. I called the NYPD Aviation Unit to ask about the legality of my attempted flight and told me to call back again later since this was an unusual request. When I called them back they generically stated that it's not legal under FAA regulations within the NYC area, but did not refer to any specific law and suggested I go to Long Island or Jersey.

What is meant by a "congested area of a city/town/settlement" in FAR 103?

If it's not illegal, then it's legal. So if I can prove that it's not, then I should be legally good to go.

There are (at least) two general points to consider. First, hang gliders are ultralights and the regulations in 14 CFR 103 apply to them. 103.17 says:

If you look at a sectional chart, most of the airspace over NYC is class B, including to the surface in many places: 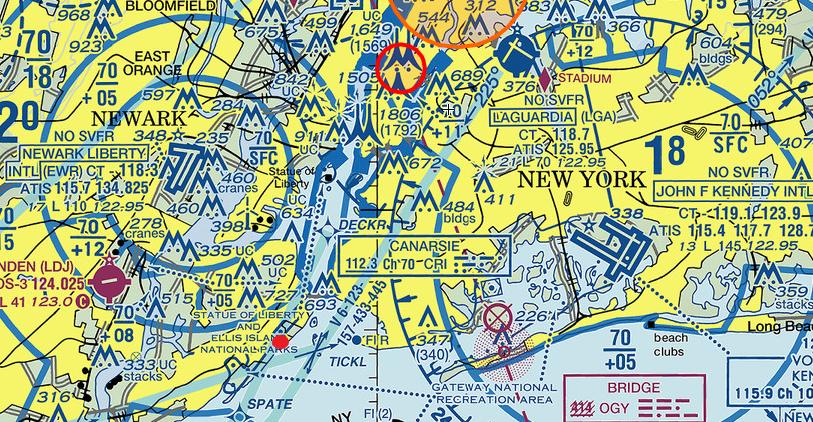 In a class B surface area ultralights require ATC's permission to operate; whether or not the area was congested is a separate issue and nothing to do with the airspace class itself.

Second, as a general statement the FAA regulates what happens in the air but not what happens on the ground. States and counties can make their own rules about launching and recovering aircraft, and national parks have their own rules too. In other words, you need to make sure that wherever you fly your hang glider, it's both legal to launch and legal to operate in that airspace.

Now, let's look at Midland Beach, Staten Island specifically. I've marked the approximate location on the chart with a red dot. It's hard to see because the chart is so crowded, but that part of the coast is depicted as a "special conservation area" and there's also a comment that it's part of the Gateway National Recreation Area, which is a national park.

The airspace there is class B from 1500ft upwards, meaning that if you stay below that altitude then you're OK from the airspace point of view. It's true that the FAA discourages flight over parks, but it's mostly about noise (not a concern in a hang glider) and there's no actual regulation anyway.

However, it seems likely that you were launching from a national park and that does require permission from whichever authority runs it. I have no idea whether or not that's what the NYPD were talking about.

(My personal suspicion is that the NYPD officers just decided "that can't be legal" and made up something on the spot. But there are still actual regulations that do apply, whether or not the officers were fully informed/trained on them or not. I also don't know why the NYPD would want to enforce FAA regulations, but that's a topic for another site.)

Many areas of NYC are controlled area from the surface (SFC) on up, meaning you need to obtain clearance from the FAA before entering the area, either on the radio, or by a telephone call beforehand to enter the area at a specific time and following a specific flight path. I imagine your hang glider is not radio equipped, thus you would need to be calling for clearance before takeoff.

Look at the chart, drag/pan/zoom in to the NYC area, and see if you were in one of those areas. All the yellow areas should be treated as congested.

Not the answer you're looking for? Browse other questions tagged faa-regulations regulations hang-glider or ask your own question.

19
What is the legal altitude to fly through Yosemite Valley (US)?
16
What is meant by a "congested area of a city/town/settlement" in FAR 103?
2
Is it allowed to launch powered paragliders from national parks?