Which jet engines have the highest thermal efficiency?

Some automakers (Mercedes-Benz, Toyota) have recently been making news about the improved thermal efficiency of their engines, stating that they reached the 50% mark. I was wondering if it was the same for airplanes.

I think I'm pretty sure the aviation industry is well beyond the 50% mark due to the high compression ratio, but what is the most efficient jet engine in existence (currently in use or tested prototype) per category (fan, turbojet, bypass, turboprop, ...)?

Thermal efficiencies are very rarely quoted for aviation gas turbines. The metrics of interest are specific fuel consumption, and power to weight ratio. While a higher thermal efficiency will increase these, SFC and thrust/weight are performance terms that are easier to comprehend, and describe the performance in terms that can directly be used in performance calculations of the aircraft. However, this article from Pratt & Whitney indicates the best aviation gas turbines had just reached about 55% in 2010. But there is no indication of which engine has the highest figure. 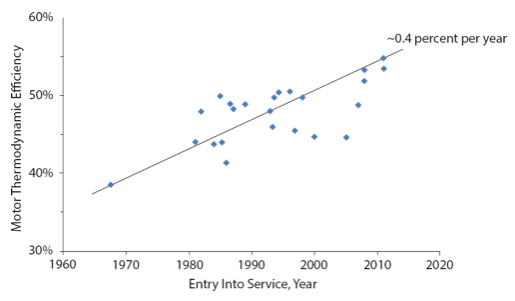 Since then GE claimed on the 28th of April 2016, a world record for thermal efficiency, with 62.22%, for a combined cycle plant, in France. GE state that it normally takes about a decade to gain 1% in efficiency. The high thermal efficiency is significantly due to operating at a very high temperature. GE state this plant runs at 2,800 deg. F, but the real number is probably proprietary. They say it's like running the engine at takeoff conditions for its entire flight. As you could imagine, this makes cooling very important. It also takes about 30 minutes to get the turbine from idle to maximum speed. Clearly, that won't work in an aircraft. 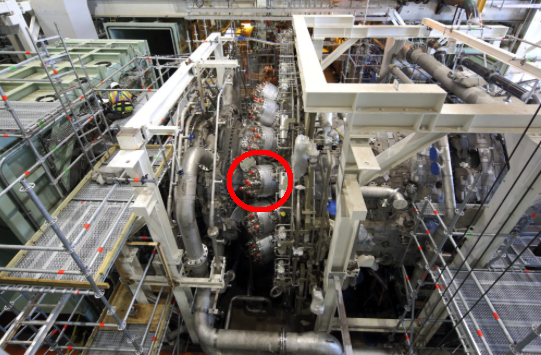 This is the GE 9HA gas turbine. You can see the fuel nozzles (one circled) - and that weight does not matter. So, an aviation turbine will never match this level of performance.

In comparison, the first simple cycle model, developed in 1939 is said to have had a thermal efficiency of just 18%.

But maximum efficiency is not always the ultimate goal. A product director from Rolls Royce says:

Everyone would love 60% but the cost is often prohibitive. Not everyone needs a heavy-duty combined-cycle plant. Machines that can achieve baseload within ten minutes such as the Trent 60 are important for the peaking market and a lot cheaper.

Land based combined cycle gas turbines are more efficient than aviation turbines, because;

Not the answer you're looking for? Browse other questions tagged jet-engine engine turbofan efficiency turbojet or ask your own question.

24
How does gas turbine efficiency compare with supercharged piston engines?
2
What is the efficiency of the turbine of a modern jet engine?

9
Are tripropellant jet engines a viable way to increase fuel efficiency for large commercial airplanes?
1
How bad is the efficiency of jet engines under low loads?
1
Fans of tubofan jet engines
23
What is the difference between turbojet and turbofan engines?
2
Is there an equation for jet engine efficiency as a function of turbine inlet temperature?
1
Are high bypass turbo jet engines suitable for tail and body mounted engines
3
Why do some Turbofan engines have multi-stage fans?
7
What causes the horn-like noise during the start-up of some jet engines?
1
Is axial bearing in turbo fan,turbo jet engines neutraly loaded?